In today's music industry, it can take decades to develop a self-sustaining career. That's something Toronto roots-rockers Zeus, new signees to Arts and Crafts records, are finding out.

All four members that make up the band have performed in several outfits for the past 10 years or so. Guitarist/singer Mike O'Brien and drummer Rob Drake are also members of Paso Mino, Neil Quin still plays with Major Grange on the side, and bassist Carlin Nicholson has another band called The 6ixty 8ights with whom he still tours. 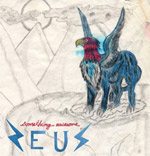 The members have intertwining histories, too. O'Brien and Nicholson, Zeus's head songwriters, have fostered a writing partnership for years.

“Mike and I, we've been writing together since we were 13 or 14,” Nicholson reminisced, over a brief phone interview. “When we started out, Mike was in my very first band with my brother as well.”

Through that long-term relationship, O'Brien and Nicholson have been able to create an open channel of communication musically, something that can be tough to create.

“I've worked with some people who are a little more uptight about [co-writing]... but you grow out of that eventually, [and] if the ideas are flowing... then how could you mistake it?” Nicholson said.

The result of their collaboration is heavily influenced by roots-rock and alternative bands, from The Band to Canadian ‘90s rockers Thrush Hermit and Eric's Trip. A distinctive pop sensibility is also evident in the work of O'Brien and Nicholson (along with Neil Quin, who is an accomplished writer, himself).

And after years of playing the GTA bar scene, Zeus has now fallen into good hands. Jason Collett, acclaimed singer-songwriter and member of Broken Social Scene has taken the group under his wing. Not only are they now Collett's backing band, he's also their acting manager.

Nicholson described Zeus' meeting with a Collett as “a happy miracle... it's the classic thing, too, of having a [manager] who's like us rather than a managerial type dude. Those guys are great, but they think about things a little differently. So whenever everybody can come together all at once you know you've hit on something.”

And as Arts and Craft's newest signing, Zeus are releasing an upcoming EP to tide fans over until a full length album is released in September of this year. It's called Something Awesome, and the story of its artwork is fascinating.

“We found this collection of strange drawings and poems sent from a guy to his wife and child when he was sent to prison for armed robbery in the 70s. This was when we moved into our studio space, we found it in the bottom of a drawer. So we had these things kicking around all the time. It turns out he passed away of a disease, and his kid also got shot around Riverdale, and his wife's moved on too, so we spent a long time trying to track people down and seeing if this was something that they wanted because we're talking about 30-40 pages of pure emotion...really heavy stuff.”

But amidst all of the papers, one picture stood out.

“We found a drawing that his child had sent to him and it was a picture of what you'll see on the album cover, of this child's drawing of a griffon,” Nicholson explained. “It just seems that it played right into the Mount Olympus roots vibe.. so we threw that together.”

Though Something Awesome will be released later this year, Zeus can be seen live, supporting Jason Collett this Friday, March 27 at Call the Office. Doors open at 9:00pm.