Around the Ring: TNA PPV thoughts


TNA's second PPV of the year is coming (or has ended if you read this Monday onward). I thought I'd put in my two cents and make some predictions.

Payton Banks vs. Traci Brooks - I thought that TNA would have these two build up their feud just a little more before placing them in the ring. Brooks isn't the best female wrestler out there (and neither are some of the WWE ladies for that matter), so let's see if Banks can help carry a match. I think these two will slap each other and pull hair more than anything and end up in a double DQ.

Booker T vs. Robert Roode - Booker T would be shaking his head if TNA makes him lose to Roode. Roode is an awesome heel but there's no way that T is going to lose this one. It may go to a DQ because Booker wants to tear Roode a new one.

AJ Styles & Tomko (c) vs. BG James & “Bullet” Bob Armstrong - I said it before: “this makes no sense.” The only way that BG and “DADDY” are going to win is if TNA is going to split Tomko and Styles for good. BULLET BOB? Please.....zzzzzzzzzzz

Team 3D & Devine vs. Motor City Machine Guns & Jay Lethal (Hardcore Street Fight) - This one will be one of the matches of the night. These guys have had a really cool rivalry but I think MCM and Jay Lethal will take this one because TNA without the X Division is like a Saturday night without beer. It's just not (nor will it ever be) the same without it.

Abyss vs. Judas Mesias (Barbwire match) - Sing along with me: “Bloody, bloody, bloody!!!......BLOODAY!!” This one will be short but Abyss can bleed and take a huge beating. Let's hope that Abyss picks up this win for the last couple months of laying down and doing the J.O.B. for others. 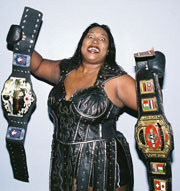 Awesome Kong (c) vs. ODB - Kong won't drop the belt this soon. I think this rivalry will be fun considering that these two ladies can actually fight and move in the ring. ODB is really amusing on the mic and I think TNA will build her run with the belt up over the next couple of months...but it's not her time yet.

Kurt Angle vs. Christian Cage for the TNA Championship (w/ Samoa Joe as the special enforcer) - Although I would like Christian to win this one, unless Joe interferes, Angle will walk out with the belt. Actually, any way that you look at it, there WILL be some kind of controversy.

On the Raw/Smackdown side, nothing too exciting announced besides the Smackdown roster also having an Elimination Chamber match for the upcoming PPV (I'll discuss that one and the way WWE has pushed this PPV next week).