Pity the Foo who doesn't like the new double album


My God, has it been four months already? Geez…it seems like yesterday that I wrote the season finale to “Musical Ramblings!” For those of you who don't know me, I am the self righteous guy that brings interesting music reviews to these pages. Sometimes I'm nice, sometimes I'm mean. I hate lots of things, but on the other hand I do like many different genres of music…I just prefer the heavy and hard stuff (and no, Papa Roach doesn't count.) If you like or hate my opinions, email me at popeyepopsolive@hotmail.com and give me your feedback. If you want to be a star, email the Interrobang and get your counter review published. You can even slam or praise me in these pages! NEAT!

The next couple of issues are going to focus on CDs I picked up over the last few months . Let's start the year with a killer disc…or should I say two discs! 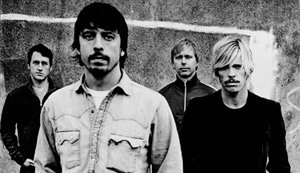 Foo Fighters — In Your Honor
I'm probably one of the biggest Foo Fighter marks on the planet, so it's kind of hard for me to bash anything these guys do and it's especially hard to bash this CD set. For those of you who don't know, the Foos decided to release a double CD set that features one CD full of hard rockin' tunes and another disc that puts the listener in a special little place with acoustic and softer tunes.
I have to be honest and say that I've listened to the hard rock CD way more than the acoustic CD but that's not saying the acoustic disc isn't any good. I usually enjoy Grohl's acoustic, mellow side (check out last year's Times Like These and tell me that it's not wicked) but I just found the rock disc to be full of fast, punchy tunes that you can't help listening to over and over. No Way Back, Hell, The Last Song and The Deepest Blues are Black are some of the Foo Fighter's coolest songs…and that's putting them up against an already superior catalog of material.

If you really want to get into the softer CD, lay there just before going to bed (with or without the spins) and just enjoy it. I really like A Friend of a Friend and Cold Day in the Sun that features drummer Taylor Hawkings on vocals.

There are actually two different versions of this set. One is the regular version and the second is a Dual Disc version. The Dual Disc features the regular CD versions as well as a 5.1 version. Being a spoiled ass (or someone who just splurges on his own entertainment euphoria) I have a nice surround system hooked up in my crib and the sound difference between the different versions is really noticeable. Spend the extra 20 bucks on the Dual Disc if you have a similar set up. As another bonus, the DD version has a 25 minute documentary chronicling the making of the CD. Fun stuff.

I love the Foo Fighers and this disc is just another piece of strong evidence that Grohl is one of the best rock players, arrangers and songwriters of the past ten years and that he deserves all the success (and even more) with the Foo Fighters. This is a candidate for my coveted album of the year award.