A new look for crimefighting


Faster than a speeding bullet, more powerful then a locomotive, its… Campus Security with their new, upgraded image. 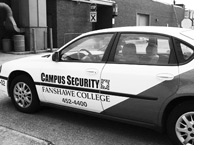 With improvements that include two new patrol cars, a new office front and an entire image overhaul, you may not recognize your good ol' boys and girls in blue come September.

To accompany the upgrades, staff has also increased to include two new shift supervisors, who will oversee functions and provide leadership for staff.

“The supervisors will have a policing background and knowledge of the criminal justice system,” Pimental said. “They'll bring their expertise.”

Campus Security has also tried to revamp their image by developing a logo, which can be seen on the two new patrol cars touring around campus. Pimentel hopes that by branding security staff with a recognizable logo, students and security can interact more effectively.

Another major change can be seen at the Campus Security Services Centre. Although still at the same location, the space has been expanded and protective glass has been added between visitors and staff, which will be more conducive for walk in complaints.

Emergency phones have been upgraded to a system that is more technologically advanced and records communications to better coordinate response. Other upgrades include incident tracking software, digital cameras and a dispatch console that is similar to ones used by smaller police stations.

Pimentel said the new facilities and equipment would improve communication not only between staff, but also assist with security's interaction with those in need.

“Over time people will look at security as helping and assisting,” said Pimentel.

In terms of crime prevention, Campus Security is offering Rape Aggression Defense (RAD) courses. This extensive self-defense course is available for women to aid in the prevention of violent crimes and is free of charge.

Safe Walk is also available to any student or staff member who feels safer walking through campus with a security guard or foot patrol volunteer at night.

Pimentel said violations of student code of conduct, like fighting or pulling fire alarms, were the most common infringements in the past, but Campus Security still monitor student-housing areas and are confident the new look will increase their visibility.

Although Campus Security is only responsible for incidences on campus or any property owned by Fanshawe, they will call London Police if an incident is called to their attention and is outside their jurisdiction.

Pimentel understands that in a college environment certain levels of social interaction are tolerated. He recommends that students, “Keep [partying] in reason and respectful of others and not to over extend their boundaries.”