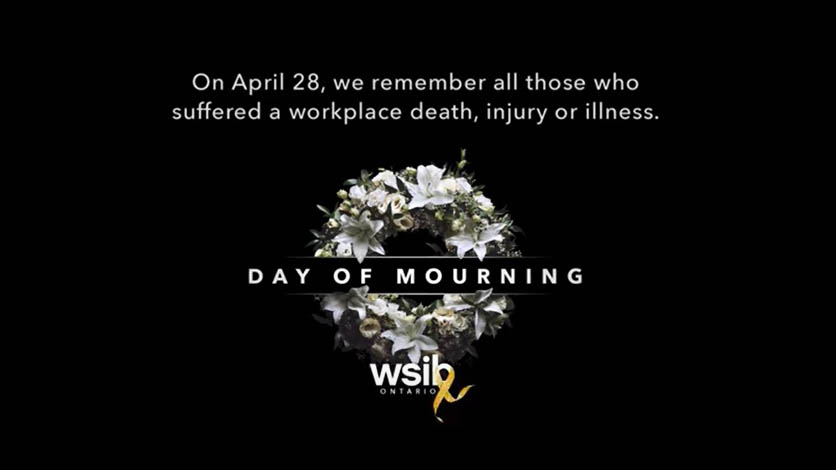 CREDIT: THE WORKPLACE SAFETY AND INSURANCE BOARD VIA YOUTUBE.COM
The National Day of Mourning (April 28) honours those who have died, been injured or suffered illness in the workplace.

April 28 is recognized as the National Day or Mourning, in memory of workers who have been killed, injured or suffered serious illness while on the job. Fanshawe College, which offers courses in various frontline positions including healthcare and construction, acknowledges this day once a year by lowering all flags on its campuses to half mast. Rob Geoghegan-Morphet, a licensed carpenter and teacher at Fanshawe in the School of Building Technology said that most, if not all injuries that occur on the job are preventable.

“I know many people who have been injured,” said Geoghegan-Morphet. “And it’s because they weren’t properly trained. And they weren’t following the rules.”

That’s why he’s grateful that Fanshawe not only recognizes the National Day of Mourning, but infuses a high standard of safety training into its curriculums.

“At Fanshawe, we go above and beyond what the regulations are for workplace safety,” he said. “At the same time, we also recognize that there are many, for me, there are many people who have been injured, and it could have been preventable. And the way to change that is to make people more aware.”

Geoghegan-Morphet said that, sadly, in the industry, things often don’t change until the worst occurs.

“Unfortunately, there are too many unfortunate stories of people,” he said. “And hopefully, from those people, they ended up changing things. I know people that have been severely injured from running monster circular saws, working by themselves on a weekend and something happened that they didn’t expect, or they just made one wrong move. And now, that person has a chronic injury. But now that company has also changed.”

Denise Luksys oversees various construction projects at Fanshawe College as part of the Facilities Planning Department. She believes workplace injury goes beyond the industry and impacts everyone.

“It can have physical, emotional, and mental impacts, not just to the injured person, but to the people around them,” said Luksys. “If you witness something, if you see something or if you’re the actual person injured on a job. [The National Day of Mourning] also validates the importance of why [students] are taught to work safely, before learning a new skill or trade and to prepare them for their new career paths that they’re taking.”

Despite its global reach, Luksys highlighted why it’s so vital that Fanshawe in particular recognizes this day.

For Geoghegan-Morphet, the education that him and his colleagues at Fanshawe impart on young students can help make a real difference in the industry

“What we do in here is to keep all of you safe and us safe,” he said. “What happens in the real world isn’t necessarily correct. But I can’t control that. So if we have students that go out and understand and recognize more of the dangers and recognize that it doesn’t actually take that much longer to wear the appropriate clothing and to wear boots and to wear safety glasses—which so many people don’t understand and don’t do….that’s something that a person changes, and then hopefully, others around them recognize that.”