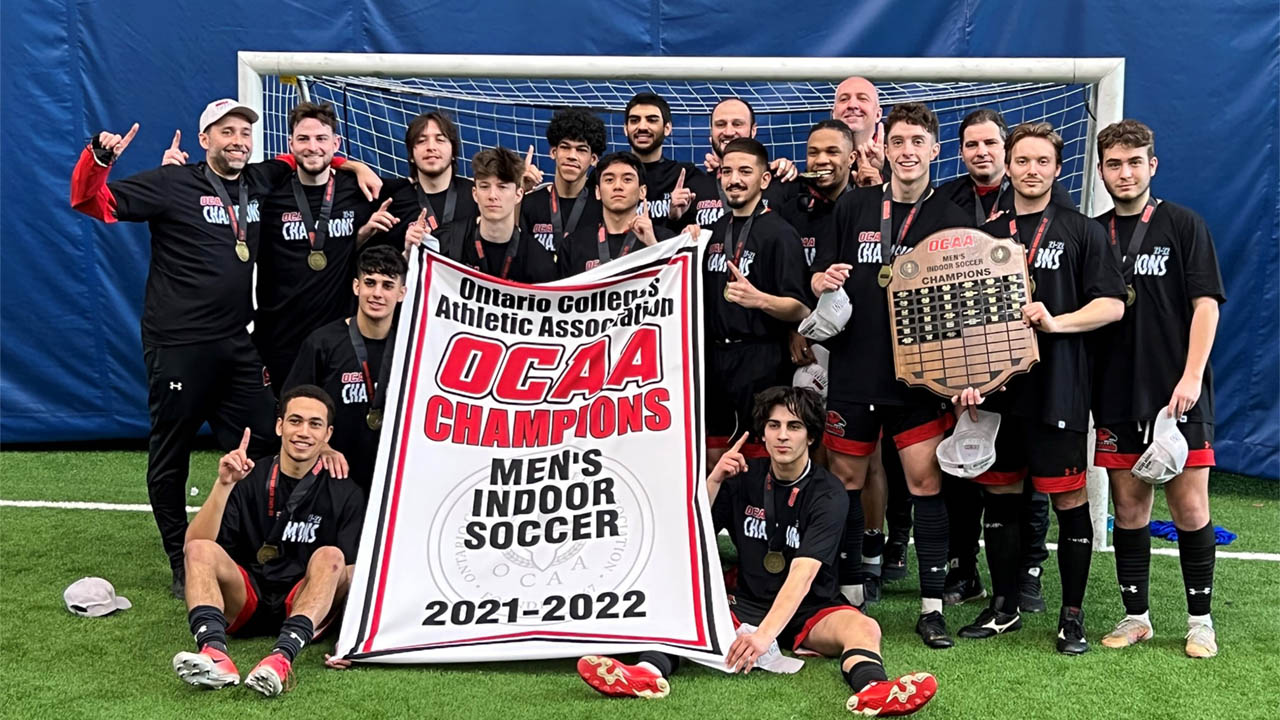 Fanshawe Athletics can add another OCAA title to the record book as the Falcon men won their first indoor soccer title in school history. Indoor soccer has been an official OCAA sport since 1986 and Fanshawe had only medaled thrice before with their best result being silver in 2019. Head coach Rob Pereira said his team was ecstatic to win gold and that it was a true team effort to pull it off.

“We are very happy to have won the first Men’s Indoor Provincial Title in Fanshawe history. The players performed very well and we had many key contributions from several players,” said Pereira.

Three players from Fanshawe’s roster were recognized by the OCAA for their excellence. Ryan Baker was named Tournament MVP for his outstanding play throughout, while Jalen Loague and Justin Wood were named Tournament All-Stars. All three scored huge goals and came through in the clutch when the team needed it the most.

The odds were stacked against the Falcons from the very start when they were blown out 5-0 by the Humber Hawks in game one of the tournament. The team knew then that if they were going to win the gold, they needed to overcome Humber.

The men set out on their mission to do just that and it began with a match against St. Clair. The Falcons scored their first goal of the tournament and that ended up being all they needed, as they focused on defense after an inexcusable five goals against in the previous match. Fanshawe ended pool play by reconnecting with their scoring ability in a dominant 6-1 over St. Lawrence to go 2-1 on the day, punching their ticket to the semi-finals.

The Falcons would again find themselves on the back foot, down 2-0 to George Brown in the second half. These men might have been down, but they were not out. They battled back and tied the game 2-2 with a gorgeous goal from Loague that set up penalty kicks. Four Falcons scored on their attempts while goalkeeper Luis Medici secured the win with monumental saves on George Brown’s first and fourth attempts.

Now the only team that stood in front of Fanshawe’s quest for gold, was of course, the undefeated Humber Hawks. However this time, the Falcons got off to a perfect start, going up 2-0 on the tournament favourites from tallies by Mike Sneddon and Wood. Humber fought back to make it 2-1, but Fanshawe held on with incredible defense and goalkeeping to upset Humber and take the championship.

The 2022 Fanshawe men’s indoor soccer team will forever hold the title of first in school history to win the OCAA tournament. Unfortunately, there will be no CCAA opportunity for these men to prove themselves on a national level due to cancellation, but on the bright side, they achieved the maximum they could this season and can be proud of what they accomplished.
Fanshawe Falcons OCAA Soccer

London gets a new runner's group, just for women