Top 10 shows and movies to watch during the holidays 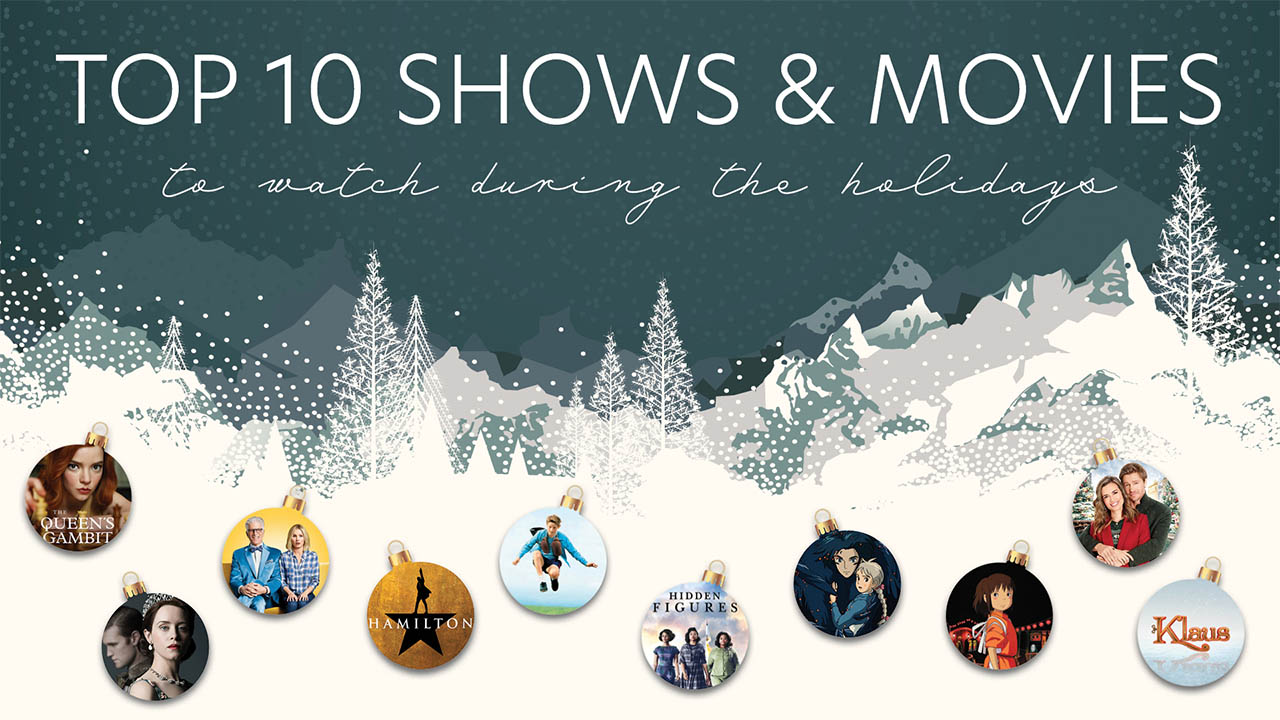 We are just about done our finals, and freedom is only an arm’s length away. No more schoolwork, no more deadlines, and a stress-free break is all that awaits us.

However, since we’re still in a serious pandemic, we get an all-free pass to make ourselves comfortable on the couch, get acquainted with the remote, grab a beverage and a million plus one snacks, and binge watch everything we couldn’t watch because of school. Guess what? You can’t feel guilty because going outside would actually risk others, so it is actually your moral duty as a human being to stay inside and watch TV. Take that, conscience!

To get you started on your movie and TV show list, here are some must-watches for the holiday. Now, the holiday is all about spending time with your family, reflecting on the year, and making resolutions. Curses! We can never get rid of that good old conscience! Anyways, watching some critically acclaimed movies and shows that also feed our moral compass is never a bad way to go, especially when they rock and have amazing actors. Some of these shows and movies can be a good motivator for the mind and soul as we reach the end of a year and begin a new one. Some of them are just fun and cheesy, because we have to have a good mix. So, let’s check them out, and stock up on popcorn!

If you are looking for a story about a heroine who defies all odds and beats a man at his own game, then look no further than The Queen’s Gambit. Enjoy stimulating games of chess (it’s much cooler than it sounds), a young girl battling drug addiction and the temptations of alcohol and beating everyone to get to the top in the sexist world of the 1960s.

There is nothing more entertaining than watching the lives of royals unravel while sneaking a peek of their seemingly lavish and enviable lives. If you enjoy historical dramas as much as I do, this one will be an eye-grabber for sure. Follow from Queen Elizabeth II’s marriage in 1947 to the tumultuous relationship of Princess Diana and Prince Charles. Of course, this will then lead you to watch clips about Diana’s death and other scandals you can find about royalty on YouTube. Oh, the content you will see! Enough to keep you entertained for the holiday break for sure!

Remember that moral compass I was talking about earlier? Prepare to feed your soul with some much needed pondering of the ethical and moral decisions we go through on our time on earth and the disastrous consequences we face because of our choices. This is not a religious thing, it’s a basic human condition thing. This show entertains the theory of change and second chances even in the afterlife. It will definitely keep you attached to the couch and binge the whole thing in a few nights. Who knows, you might even decide to take up some philosophy reading or even a class. This show definitely gave me a wake-up call when they mentioned the name Aristotle (which I recognized) but I didn’t know what he did. I definitely need a dose of philosophy, so I don’t feel so uneducated.

This play has brought even non musical-lovers to watch it and listen to its many cleverly written songs. Now, instead of buying a very expensive ticket to watch this amazing depiction of American history through the eyes of its founders, it is available on Disney+ for a much cheaper value. Rapping and singing is woven into a beautiful display of the challenges America faced to become a free country and create a government. The wives and love interests of the Alexander Hamilton also get to depict their narrative in the unfolding of the events that changed America forever. A dose of love, a lot of envy, and a dash of scandal spice up the play and bring a fresh perspective on the story of the man on the $10 bill. This is a good sing/rap along for the family to enjoy in the winter break.

This is an empowering movie that talks about the detrimental consequences of stereotypes placed upon genders. Billy does after school boxing but doesn’t enjoy the sport and does it because his father and his father before him had played. After his encounter with a teacher instructing a ballet class held in the same gym after his boxing class was over, Billy becomes entranced with the art of ballet. Secretly doing ballet and ditching boxing without telling his father, he finds his passion in dance and uses it to express himself. However, a not-so-happy father finds out, and Billy’s freedom to dance is at risk. This story is empowering and follows the hardships of a boy trying to do what he loves, even if it’s not a “typical” passion for his gender.

This is one of my favourite movies that I have now re-watched about seven times. In preparation for Black History Month this coming February, I would definitely recommend getting to know the story of these heroines of our history. Their strides change the world, and not many knew about it; this award-winning movie changed that for sure. It not only talks about the discrimination women faced in the 1960s, but also about the racial segregation prevalent in this time. Despite all the obstacles the three women in this movie faced, their contributions to NASA were remarkable and even pivotal to the launch of astronaut John Glenn into orbit.

Studio Ghibli movies are Japanese animated movies that are unique and have some the most interestingly animated stories ever made in my opinion, and many viewers anticipate the releases of the studio’s movies every year. Howl’s Moving Castle is a Studio Ghibli classic and available on Netflix among many other Studio Ghibli films. This one is a perfect movie night choice for the New Year as it centres on finding yourself, your confidence, taking leaps of courage, and other magical things. The New Year is all about changes and making goals, and this movie can be a great inspirational pick-me-up.

Another Studio Ghibli classic, Spirited Away takes you on an adventure to the realm of the spirits and the main character struggles to hold on to her human identity as she makes it through her journey. Another story of finding yourself, courage, and of course a dash of goofy and weirdly animated magic. This is another good pre-New Year’s pick that can get you into that resolution making mood in time for 2021.

9. EVERY HALLMARK-ESQUE MOVIE AND TV SHOW

Remember how I said there were some cheesy ones in the mix? Hallmark-y movies are never a bad way to go during the holiday season. The cringe-worthy and cliché plotlines are hard to watch, but you can’t stop once you have started, and you have to do it every year. It’s an unwritten rule that everyone follows this time of year. Some “good” ones are: The Mistletoe Promise, A Heavenly Christmas, The Princess Switch, The Princess Switch 2: Switched Again, A Christmas Prince (and all its sequels) and my personal favourite Hallmark TV show, When Calls The Heart. A fair warning, these are not meant to be great, they are simply meant to be watched because we need to, and we can’t stop. Otherwise, how are we going to get in those extra laughs in the holidays?

A new Netflix release that was probably the best Christmas cartoon movie I have watched in all my, not so many, years. Obviously, that’s just my opinion, but it was also an award-winning film for a reason. The story follows a unique take on the origins of the Santa Claus myth. Ever wonder why you have to write a letter to Santa Claus to get what you want for Christmas? Why he gave gifts? Why people think his reindeer fly, and so on? This movie will answer all your questions while you enjoy the great animations that tell the story of Klaus and Jasper the mail man. This is a good pick for a family movie night for the Christmas season.
Christmas Holidays Movie lists Movies

Mind your mind over the holidays