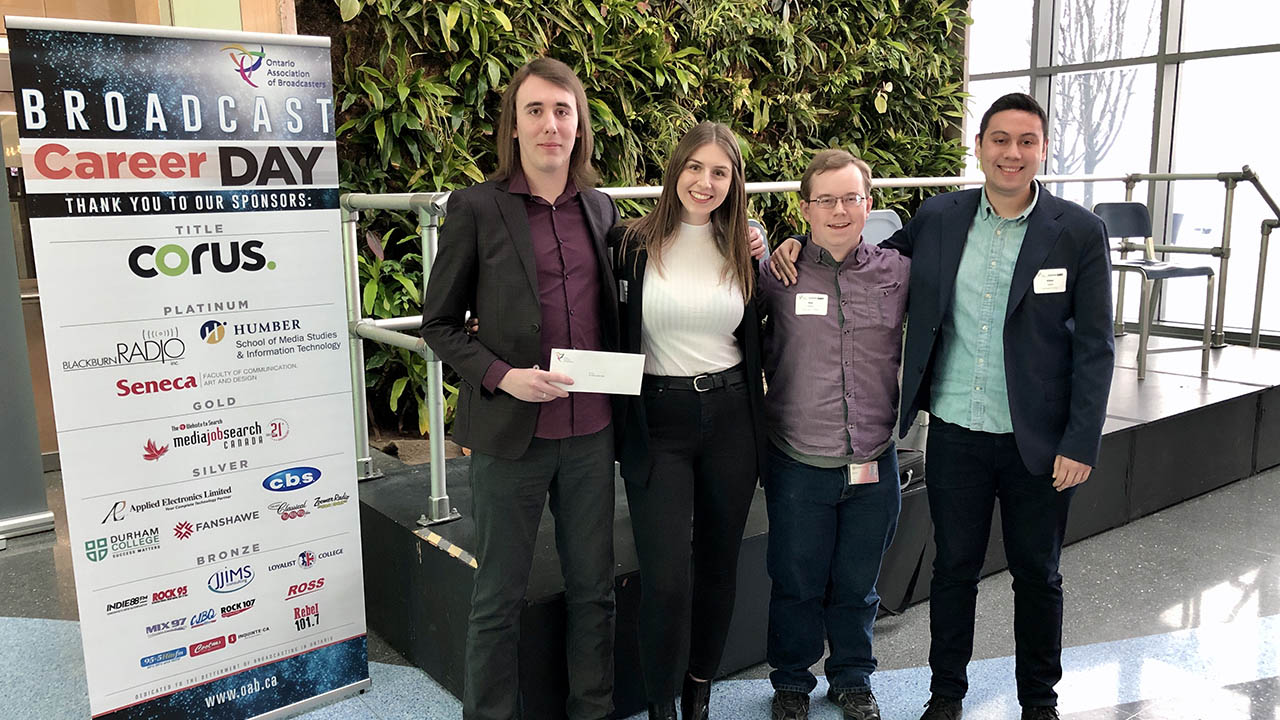 Fanshawe’s team earned gold for the second year in a row at the Ontario Association of Broadcasters (OAB) Career Day. The event ran a contest to promote the power of radio during emergencies, through advertising, and by being local.

RJ Lowe, Ethan Ralph, Vanda Di Michele and Abe Peters earned the $500 prize for their “The Power of Local Radio” story. OAB-affiliated radio stations across Ontario will air it. Other Fanshawe teams placed third and fourth place in the competition.

The groups of students presented their projects to panelists, other educational institutions, and industry partners.

“It’s been definitely an honour to be recognized amongst a huge industry with professionals,” Di Michele said. “The fact that we’re students and got this honour, I think we can all say we’re very proud of ourselves and the team.”

The students competed against all OAB radio stations across the province.

“We weren’t just going against other schools, other colleges in Ontario, we literally went against every radio industry that participated in Ontario and we beat all of them,” Peters said.

The students also spoke to local radio’s strengths. Lowe said local radio can connect listeners to announcers who can tell them about traffic and play requests. Radio staff will appear at events. With more options for personalized and on-demand content, people want content that speaks to them.

“It’s one thing to just put on Spotify or Google Play music and put it on shuffle and then put it on the radio station and have it sit there in auto and just have it playing song after song after song,” Lowe said. “You want that voice.”

Di Michele added that despite critics speaking about the demise of radio for years, the industry still stands.

“The fact that it’s prevailed this long really speaks to the impact of localness, especially that you find within local radio.”

He added that the radio broadcasting faculty encourage their soon-to-be graduates to network with industry members, including local and national radio stations.

“The more people that hear your work, the better opportunities that you have of finding employment,” he said. “If somebody, let’s say in Calgary, doesn’t have an opening for you, their sister station in St. John might, and so they might forward that information on to that radio station and you may end up working out in the East Coast.”

The students noticed that winning the award and accepting it on OAB Career Day put them on the map. Ralph was able to sit at the podcasting table and give his resume to broadcaster Alan Cross and Lowe spoke to a creative writer for Toronto station Indie88 about going beyond creative writing tropes in advertising.

Peters said the people in the industry know the students’ names and that they won the award, and it will give them an edge when connecting with prospective employers.

“They won’t know us as just somebody who graduated from Fanshawe. They’ll know us as the OAB award winners. It’ll add onto it and it’ll really, really help.”

Ralph added that earning the award will be highly regarded in the industry.

“In most media fields, especially radio, you need to work harder than everyone else to get the jobs that you really, really, want,” Ralph said. “To have an award that represents that to people in the industry is very valuable.”
Awards Fanshawe students Radio