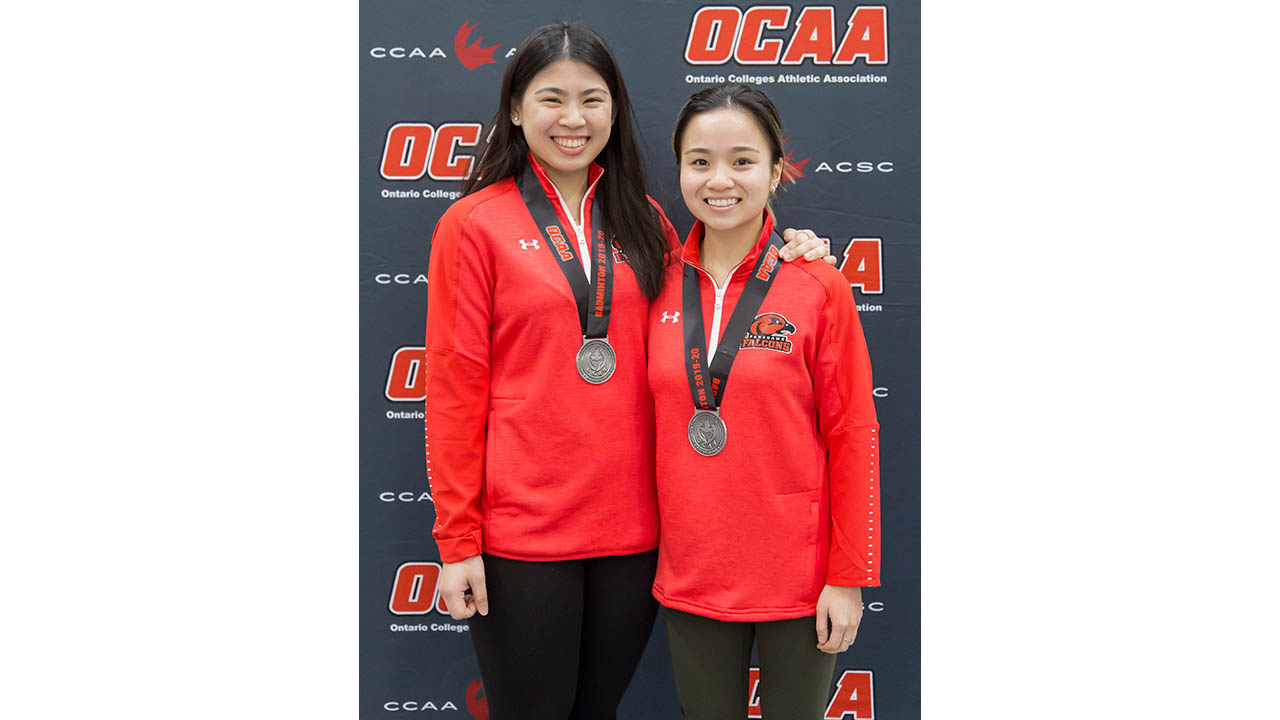 Both athletes were pleasantly surprised by the result.

“To be honest, I did not expect to make it this far,” Chua said. “I never thought that I would actually make it to Nationals after a few short months into my stay here in Canada so it's pretty cool.”

Ngu, who also earned the OCAA Women’s Double Silver Medal with Han Pham (culinary management) in 2019, said Pham was supposed to be her partner this year, but it didn’t work out due to injuries. The coaches paired Chua and Ngu.

“It feels really good,” Ngu said. “It was overwhelming because I didn't know that I could do it again.”

Badminton head coach Steve Ruddach said he “couldn’t be happier” with the back-to-back Provincial championship results and felt they’re the best he’s seen since he started taking on coaching roles in 2014.

“We have probably one of the top girls for women's singles and we've had a top women's doubles team for the last two years,” Ruddach said. “We've had good teams before, but not teams like in the past two years that have changed and adapted on the fly like I've never seen before.”

Although it’s the first season Ngu and Chua worked together, both share similar stories of becoming interested in badminton at a young age.

Ngu began playing badminton in elementary school. Her dad took her to London’s open recreation centres like Carling Heights Optimist Community Centre on Sundays. It became her passion over the years and her whole family also got involved. Her sister, Trina Ngu, used to play on Fanshawe’s badminton team.

“We played together for the first year and then she graduated after that but then I stayed on the team,” Ngu explained.

Chua, who is from the Philippines, was 12 years old when she first played badminton and then played in her city’s tournaments, both provincial and open, with her brother and their family. She took a break when studying at De La Salle-College of Saint Benilde in the Philippines before returning to badminton at Fanshawe.

Both enjoy playing together.

“With Helen, I really like her teamwork because her defence is pretty good so she can cover me well,” Chua said. “There are times where she can't cover, but then both of us can compensate each other and we both talk a lot during the play, so our rotation is good, our play is good, and we're good friends, too.”

Ngu said she likes that she and her badminton partner can have fun and enjoy the game.

“That was a major thing from last year [during Provincials], that we weren't so hard on ourselves and we tried to be as positive and just smile a lot and laugh and it happened again this year, and we got the same result.”

For Nationals, Chua will be focusing on her control and her offence and Ngu will keep the communication going between them. She noticed communicating made a huge difference in their performance.

“A lot of teams have noticed we play differently and it's mainly because of our communication,” she said “We never spoke before on the court and then once we were comfortable with each other, we found out that communication was the key.”

Ruddach said they are also getting as much court time as possible in London’s parks and recreation facilities.

“We've been playing on Sundays, on days outside of our allotted practice times and training and going to the gym and whatnot, so it's been constant pretty much since two weeks probably before the OCAA that we're getting practices almost every day of the week."

Ngu and Chua will compete in the CCAA Badminton National Championship from March 4 to 7. The tournament will be hosted by the University of Toronto Mississauga.
Badminton CCAA Fanshawe Falcons OCAA