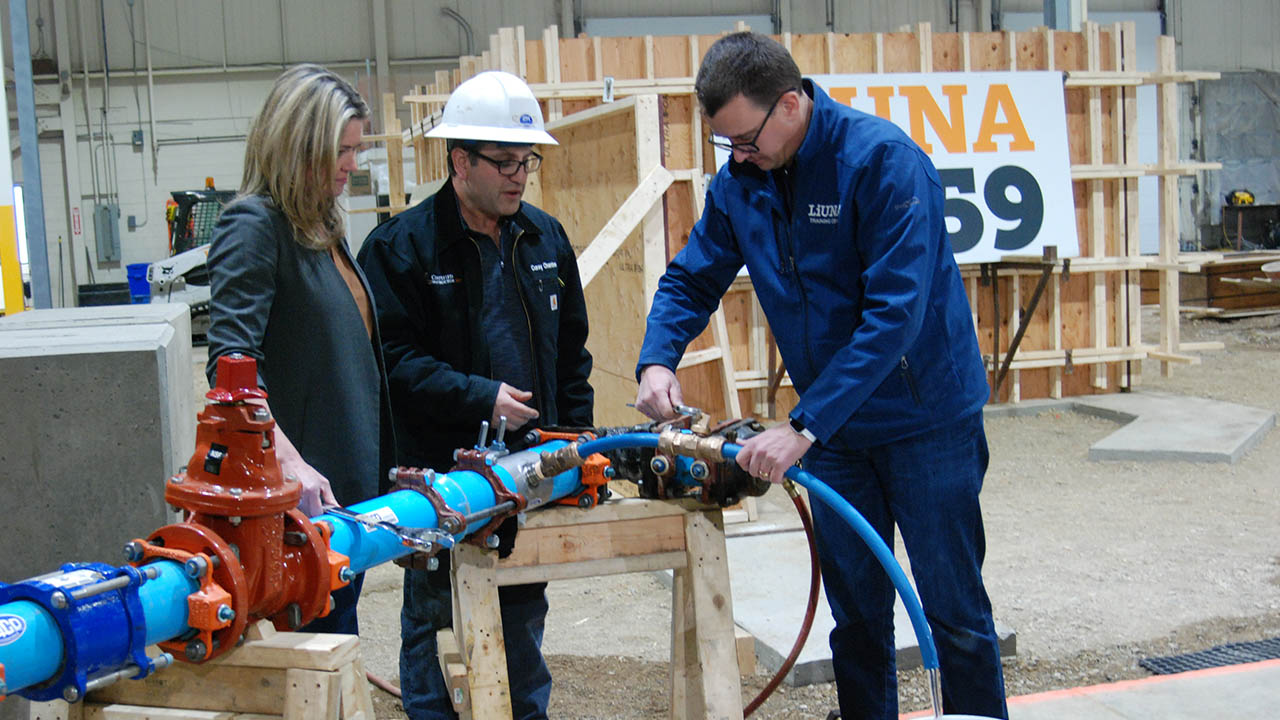 As part of the Find A Career You Wouldn’t Trade campaign, the Ontario government will provide funding towards pre-apprenticeship programs to fill a skilled trades shortage.

Monte McNaughton, Minister of Labour, Training and Skills Development, stopped by London’s LiUNA Local 1059 on Jan. 24 to announce the government will be investing $924,000 for four pre-apprenticeship programs in the Forest City. LiUNA Local 1059, the Brick and Allied Craft Union of Canada Local 5, the London Training Centre, and Collège Boréal all received funding. An Ontario government press release outlined how the money will benefit London’s pre-apprenticeships.

The Brick and Allied Craft Union of Canada’s Local 5 will train 12 people to work in construction and brick and stone masonry thanks to a $144,000 investment. LiUNA Local 1059’s $549,580 boost will train 72 future construction and cement finisher workers. The London Training Centre will receive a $99,888 investment to teach 12 aspiring chefs, cooks and bakers. Collège Boréal’s $131,135 investment will train 11 people to prepare them for work as educational assistants and child development practitioners.

“Pre-apprenticeship training helps people with an interest in the trades learn more and gain the skills they need to enter the apprenticeship system,” McNaughton said at the announcement.

He added that there is a skilled trades shortage, as businesses in that sector struggle to find people eager to work. There are 23,600 unfilled skilled trades positions in Southwestern Ontario, with 9,600 in London. About one in five jobs will be in the skilled trades by 2021.

During a media Q&A period at the announcement, Jill Dunlop, the associate minister for Children and Women’s Issues, said that skilled trades will be incorporated into the school curriculum from Kindergarten on as a way to introduce the sector to young people and get them excited — particularly young women.

“Specifically looking at women, I know from my own daughters, you’re not going to typically entice a 17-year-old girl to become an electrician if she hasn’t been exposed to it growing up,” she said, adding that there were few women pre-apprentices present at the announcement. “We have an opportunity to expose young women to that and to help fill that void.”

Aliesha Powless, a pre-apprentice studying in the sewer and water main sector at LiUNA, has always been involved with the skilled trades and loves the hands-on aspect of it. She began working in the automotive sector after completing an apprenticeship with Fanshawe College and then worked in roofing before starting her pre-apprenticeship program and her placement with J-AAR Excavating.

Powless said that women can get involved in trades and she wants to see more of that to dissolve stereotypes for younger girls.

“My daughters, they see me in construction, before in automotive, and they know a woman can do anything,” she said. “You can do anything you set your mind to, right? It doesn’t matter what gender you are.”

She also tells her daughters there are different ways of learning, as some people are more hands-on and others learn by reading books and sitting in classrooms. She and another classmate worked on a project with grades seven and eight students who came to visit and taught them how to tap a water main and put in a service.

Kevin Parker, a third year construction craft worker (CCW) apprentice student said he spent lots of time in arts and science programs in post-secondary before becoming involved in the trades. He didn’t think he’d end up in skilled trades growing up, but enjoys building things and working outdoors.

“There’s a lot of interest here that encompasses a lot of things you’d never think of so it’s worth checking it out just to see,” he said. “I’m pretty sure most people would be into it if they gave it a shot.”

1
I wish Fanshawe actually had a fall reading week
2
Workers in the trades slowly breaking silence on mental health
3
End of restrictions: Student Wellness Centre opens for all students
4
A note from the Fanshawe College Director of Equity, Diversity and Inclusion
5
Get involved with Fanshawe Athletics