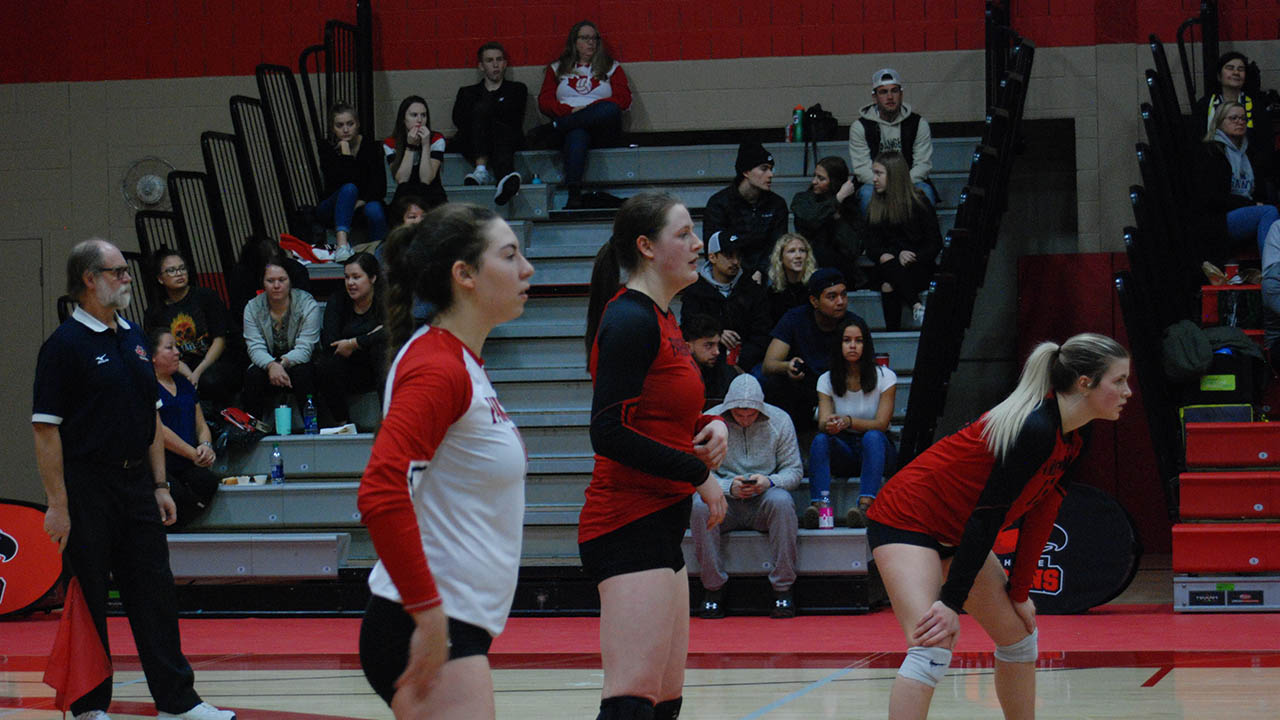 Fans of the Fanshawe Falcons witnessed some milestones during the volleyball and basketball quadruple- header against the Humber Hawks. Press releases from Fanshawe Athletics outlined the Jan. 25 games and their results.

The Falcons’ women’s volleyball (13-0) team kicked off the event with a 3-1 win over the Humber Hawks (10-3). The team, top in the OCAA (Ontario Colleges Athletic Association) West Division, extended their win streak to 36 games and nabbed a playoff spot in Provincials.

Captain Janelle Albert (business- marketing) opened the first set of the match. The Hawks’ strong hitting gave them a 14-10 lead before a stuffed block from Mattea Deleary (bachelor of early childhood leadership) and back-to-back hits from Albert and Katie Stewart (fitness and health promotion) led them to a 26-24 win in the first set.

The Hawks snatched a second set win 25-17, despite a right side hit from Skylar Johnston (nursing) and a service ace from Ashley Rafferty (business). The Falcons bounced back in the third set 25- 17, which included a block from Lauren Vahrmeyer (business) and three straight points from Albert.

After the Falcons and the Hawks traded points in the fourth and final set, the Falcons snatched a 29- 27 win to claim victory. Albert’s game-high 24 points led the Falcons.

The men’s volleyball squad (6- 7) lost 3-0 to the top team in the CCAA (Canadian Collegiate Athletic Association), the Humber Hawks (13-0).

While Daniel Ridings (construction engineering technology) and Mike Liscumb (general arts and science) delivered kills, the Hawks won the first match 25-16. The Falcons had an edge in the second set with a 12-11 lead after a dig from Justin Rulli-Levere (police foundations), a kill from Ewan Mason (recreation and leisure services) and a left side hit from Luke Blissett (bachelor of commerce), but the Hawks took over and won the second set 25-18.

Sydney Kendellen (autism and behavioural science) brought the game into overtime with an 84- 84 tie. Kendellen then scored two 3-pointers and Jessica Jordan (bachelor of commerce) gave the Falcons a lead. Wright’s free throws closed out the game and the Falcons won.

Falcons Fest concluded with the Falcons’ men’s basketball team (9- 5) falling to the Hawks (11-4) in a 93-80 final score. After a 19-19 tie in the first quarter, a few 3-pointers from Adrian Stevens (business) and 11 points from first-year shooting guard Marko Maletic (business) gave the Falcons a 42-37 lead. D’Andre Austin (business) kept the Falcons’ at advantage in the third quarter. However, Humber bounced back in the fourth quarter and won the final match of the evening. Hanani Ujullu (carpentry and renovation techniques) scored 19 rebounds and became the new record holder for most rebounds in a single game for Fanshawe men’s basketball.

The Falcons’ volleyball and basketball teams will next face the Niagara Knights on Feb. 1.