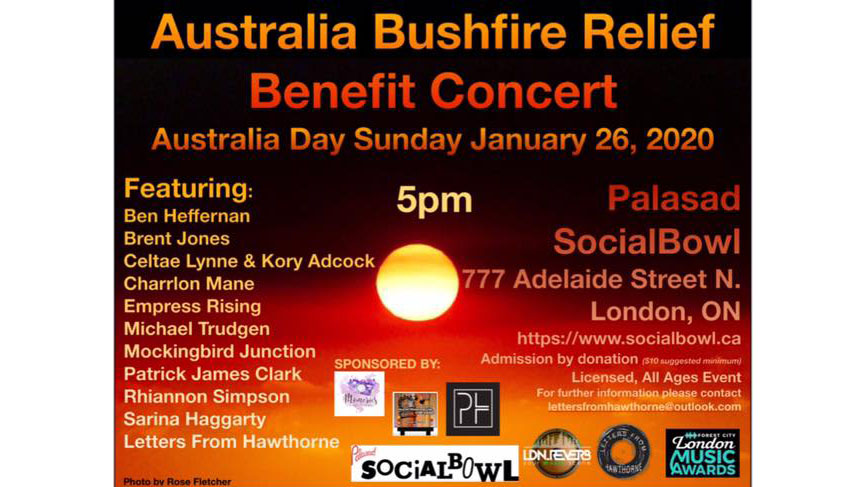 A charity concert is hoping to contribute to Australia's recovery after more than three months of continuous out-of-control wildfires.

This has been the worst fire season the continent has seen. Air quality in the country has been likened to smoking two packs of cigarettes a day in some places. Some estimates put wildlife losses at nearly one billion animal deaths. The Australian army is attempting to bury hundreds of thousands of corpses on Kangaroo Island as a pre-emptive measure to avoid what they are calling a bio security threat.

Organizer Jade bennett said she hopes that through this charity event she can make an impact on the recovery process in a special way. The night is set for a full lineup of local music at the Palasad Socialbowl location on 777 Adelaide St. N.

The idea to do something came to Bennett when in contact with a friend who lives in the country.

“He was sending me pics and updates as he was watching his country [burn] he asked me if there was any way we could raise money…. he asked if there was a way to raise money somehow and I said we can try to hold a benefit concert to help,” Bennett said.

Bennett felt compelled to do something to help her friend and put out a call to enlist the help of as many musicians as she could to attend the Palasad Socialbowl event. Within the first few hours of the call being put out Bennett says that she was able to fill her lineup and had to put a decline other artists willing to work the night.

“I think I learned so much from being a DSW and definitely wouldn’t be doing the things I am today otherwise.”

Her own career as a musician especially enabled her to pull together a big group and her duo called Letters from Hawthorne will be playing in musical lineup.

Bennett is looking forward to the night and hopes to draw as many students and locals in as possible to make the event successful. Alongside the music prize, draws donated by the Palasad Socialbowl venue will be given out to encourage participation and hopefully draw in a larger crowd.

While the event aims to be fun and to create a celebratory atmosphere Bennett wants people to remember the seriousness of what they are raising funds for.

“The environmental and ecological impact of this will be irreversible, not to mention the long term effects on the people of Australia. Also, 100 per cent of the proceeds will go to help the devastating damage caused by the bushfires.”

The event starts at 5 p.m. on Sunday Jan. 26. Admission is done on a donation basis, and no gate fee has been fixed.
Australia Charity Concerts Fundraiser London events

1
London's scene has changed, but the music lives on
2
Downtown for the Holidays gets revamped
3
London Music Venues: Wolf Performance Hall
4
FCLMA honours the local music scene with free concerts
5
Police and Pride