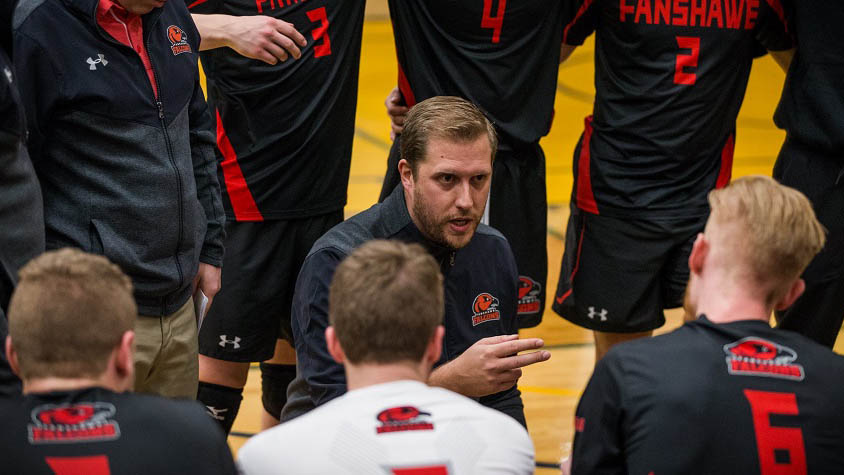 Patrick Johnston has been the coach of the Fanshawe Falcons’ men’s volleyball for seven years. Before that, he was part of the National Team Canada volleyball roster for the 2004 Boy’s Youth North, Central America and Caribbean Volleyball Confederation (NORCECA) U-19 championships and winning sliver with Team Canada. He also played for Team Ontario in the 2005 Canada Games in Regina, Sask..

In an interview with Interrobang, Johnston recalls his final season playing for the Western Mustangs volleyball team in 2013, when things took a turn for the worst when his playing career came to an abrupt end. He tore and ruptured his hamstring. This is when he decided to coach.

“I started coaching the junior girls’ volleyball team, and my coaches told me after I had gotten my rupture to go get my coaching certificate,” Johnston said. “[Returning to Fanshawe] felt weird for me being back in the city that I went to school for, but I knew I wanted to build the program up from scratch.”

“It was a challenge for me, trying to build the program back up, and having to recruit talent to come to Fanshawe was hard, but we made it happen,” Johnston said.

“Winning the National Championship last year will always be in my memory,” said Johnston of his career. “Some of these kids, I was coaching them since they were in high school and coaching them through the London Volleyball Club and to see us all win together was an amazing experience.”

This season has been a challenge for Johnston so far.

“This year, we lost 13 graduates, and four of our athletes are playing for Team Canada,” he said. “This year we have six out of our seven starters are freshmen, so this year will be a developing curve for most of our guys, then when next year when we get our Team Canada guys back for next year, we can be in a competitive situation.”

The men’s volleyball team will face off next on Jan. 25 against the Humber Hawks at 3 p.m. during Falcons Fest.
Fanshawe Falcons OCAA Patrick Johnston Volleyball

Job hunting while living with a mental illness