London mourns with Western over loss of four students 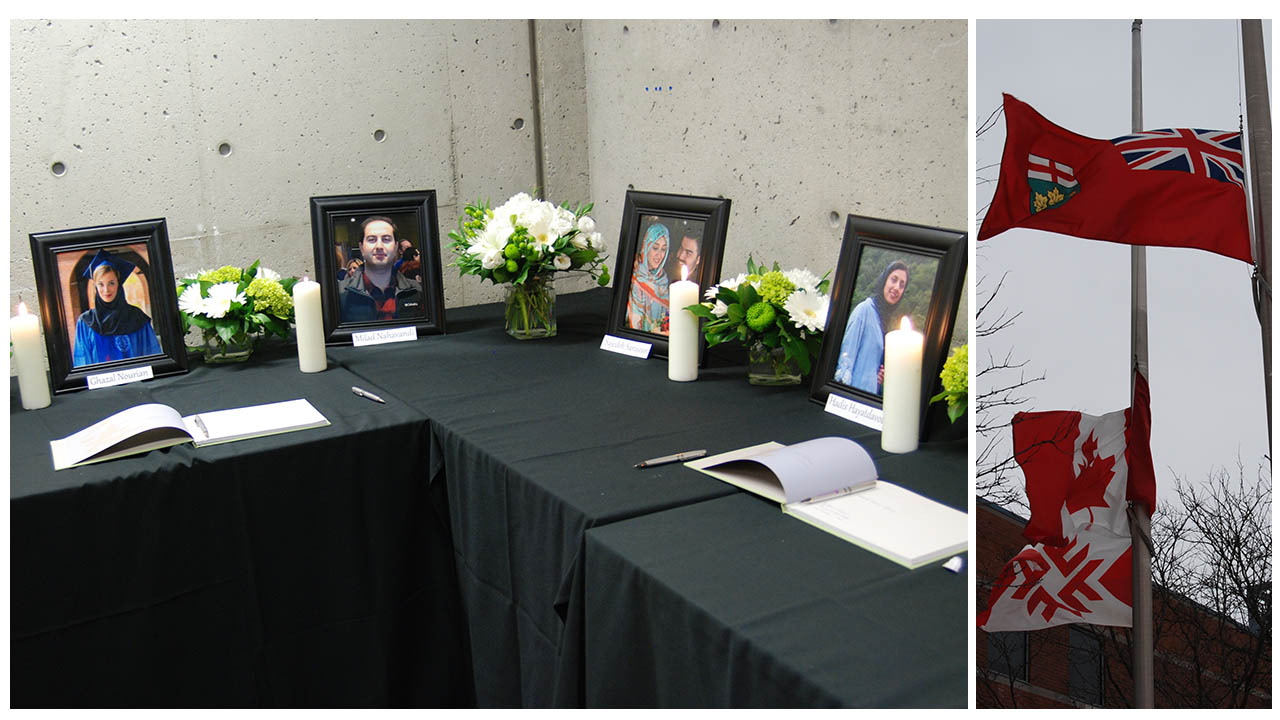 CREDIT: EMILY STEWART
(Left photo) [Left to right] Photos of Ghazal Nourian, Milad Nahavandi, Sajedeh Saraeian, Hadis Hayatdavoudi nearby condolence books and surrounded by candles and flowers. The display at the vigil honoured the four Western University students who died in the crash of Ukraine International Airlines Flight PS752. (Right photo) Fanshawe College stood in solidarity with those who died during the crash of Ukrainian International Airlines Flight PS752 by lowering their flags to half mast from Jan. 9 to 13.

All 176 people on board, including 57 Canadians, died in the crash. The Government of Canada website said the flight was shot down by an Iranian missile.

Western held a vigil in the International and Graduate Services Building’s atrium just hours after the news broke that the four students died. Ghazal Nourian, Milad Nahavandi, and Hadis Hayatdavoudi were all PhD candidates and Sajedeh Saraeian was getting ready to study for her master’s in chemical engineering and biochemical engineering.

Both levels of the atrium were filled with people mourning the loss as they shed tears and embraced their friends and colleagues. Candles and tissue boxes were scattered across tables. A slide show featuring the students smiling in happier times, flowers next to portraits, and books filled with condolences honoured the students.

Farnaz Michalski, a master’s of nursing student, knew Hayatdavoudi because she stayed at her friend’s house. Before the student moved out, her friend treated the student like her own daughter by helping her get settled into London’s community.

Her friend was unable to attend the vigil, but planned to hold her own service at home about a week after. Michalski remembers the student’s friendliness and noted they greeted each other on campus.

“She was so warm and kind and then when we would gather at my friend’s house, she would listen to my senior mom’s old tales,” she said. “I’d say ‘I’m sorry, don’t trouble yourself’ she said ‘No, no I like to hear senior people’s stories.”

Michalski tearfully said she was proud of Hayatdavoudi for pursuing higher education while being new to Canada.

“It’s not easy to go through a PhD program, I know what they go through. Being away from home,” she said. “Like any other student, I’m sure. It’s just very heartbreaking when I found out she had to die [from] this unfortunate accident and I feel bad for everybody else who is in the same predicament.”

She came to the vigil to mourn with the Western community and was moved by the service.

“I’m just happy that we’re united in supporting one another in hard times and I hope there will be more outreach for those people who need it — especially closer friends,” Michalski said. “I hope that international students never feel like they’re isolated or feel alone when they are here.”

Alan Sheppard, president of the University, addressed the mourners by sending his condolences to the families and the members of the campus community who knew the students.

“It is difficult to find the words this evening that will console us at such a time of shock and loss, but please know you’re surrounded by a community who care and want to support you in your grieving.”

Jina Kum, president of the Society of Graduate Students (SOGS), tearfully talked about how graduate school is unifying.

“Graduate school connects us. We share the dream of contributing our expertise and skills to the creation of both knowledge and culture. The loss of these graduate students is significant not only to the fields in which they actively contributed, but also the Western community who will feel their absence in the days and years to come.”

The flags at City Hall were lowered to half mast until Jan. 12. London Mayor Ed Holder told a media scrum after the ceremony that it was the least they could do and that he invites Western to let the city know how else they can offer support.

“These are early moments in this huge tragedy and I just want Western students to know that the citizens and the community of London stand fully with them and we put our arms around them in love and prayers.”

Fanshawe College lowered all on-campus flags at half mast until the morning of Jan. 13 to honour those who died in the crash.

1
Beyond the blonde: Playoff hair, beards and superstitions in sport
2
Lament for the Russian Orthodox Church
3
Local resources available for Indigenous peoples
4
Blindsided by evil
5
Students talk staying creative during the pandemic