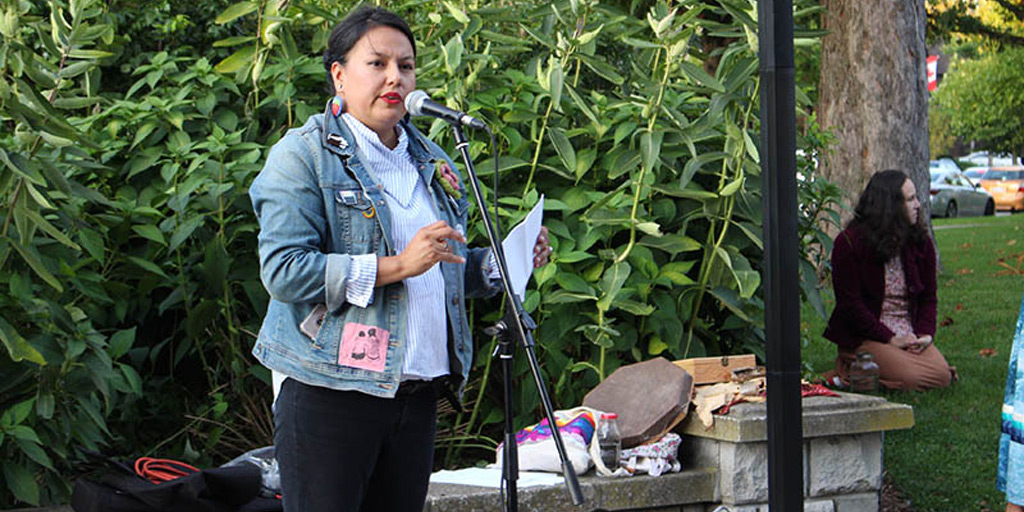 Advocates for ending gender-based violence, including Jenna Rose Sands (top left), took part in the annual Take Back the Night march in Victoria Park on Sept. 26. The focus of the evening addressed issues surrounding murdered and missing Indigenous women and girls.


On Sept. 26, those opposing violence against women gathered in Victoria Park as part of the annual international Take Back the Night march.

The historical march originally began in the U.S. in the ’70s, and now takes place in hundreds of cities across the world. In London Ont., Take Back the Night is organized by the Women’s Events Committee (WEC). This year, the WEC focused on raising awareness for missing and murdered Indigenous women and girls and Two-Spirited people.

The event occurred on the same day London’s police chief responded to a London Free Press series examining a police sergeant’s violence towards an intoxicated woman in 2016.

“Take Back the Night is always focused on eradicating gender-based violence and addressing systematic oppression and racism. We wanted to highlight the specific issues that plague Indigenous women, and the particular set of difficulties that Indigenous women encounter,” Jenna Rose Sands, Indigenous artist and WEC member, told Interrobang as participants met in the park. “I think that’s really important right now, especially in our city. We’re finding out things about police officers, and the relationship between Indigenous people and police is problematic and difficult, and I think this is such a timely event.”

The event featured drummers from the +Positive Voice program at Nokee Kwe, as well as Indigenous speakers such as Elyssa Rose from Athlosa Family Healing Services. In her speech, Rose noted that while 4 per cent of the female population in Canada is Indigenous, they make up 50 per cent of females who are trafficked.

By the time darkness fell, over 200 people had joined the crowd to drum, chant, and hold up signs advocating for an end to gender-based violence. The group marched through Downtown London on the perimeter of Victoria Park. A volunteer from the Amalgamated Transit Union drove a bus behind the marchers to accommodate those who could not walk along.

Male-identified attendees were welcomed at the rally and asked to assemble at the corner of Wellington Street and Queens Avenue to cheer on the female-identified marchers.

Once the march finished at the corner of Richmond Street and Central Avenue, participants paused to mingle, embrace, or continue to drum to catch the attention of passersby.

“Unfortunately, it’s still important to have this event every year,” WEC member Julie McDonald said. “Men are still perpetrating violence against women and gender minorities and we continue to gather in protest.”

McDonald added that organizing Take Back the Night provided survivors of violence, and those affected by it, with a way to feel validated and heard.

“There really is a unique feeling to an event when you come together with women. It’s a very empowering, emotional event,” she said. “Some people come together to remember women that they’ve lost to violence that are no longer with us, so it’s also a way to memorialize women and keep raising awareness about the issue, that it’s not going away.”
Click on the thumbnails below to view a larger version of each image. 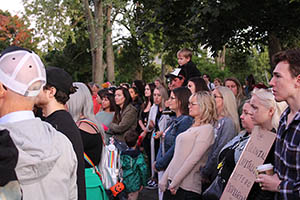 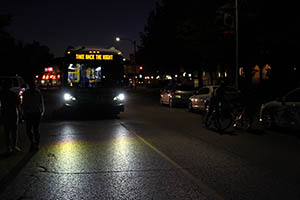 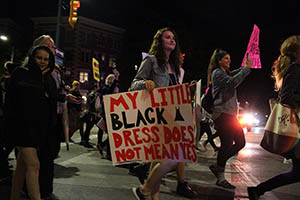