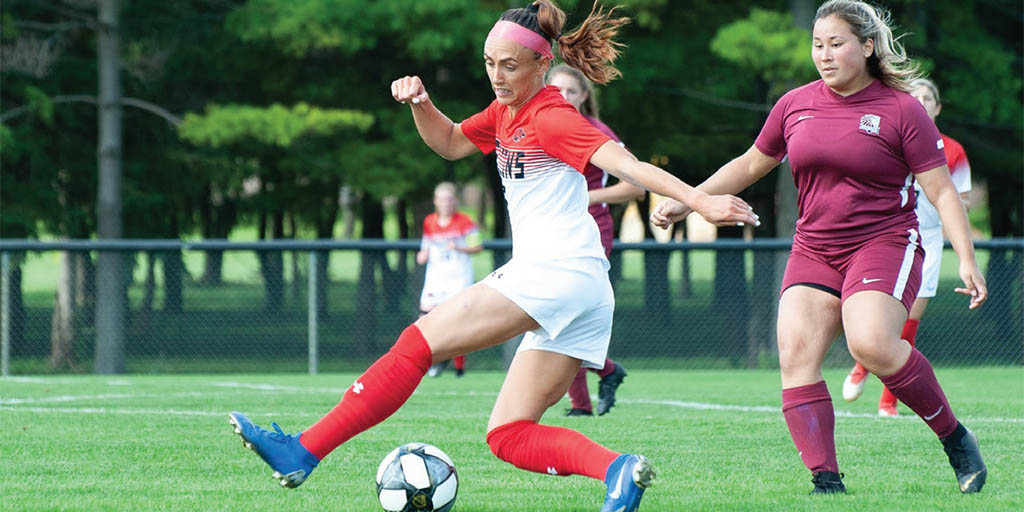 Fanshawe Athletics announced on Sept. 21 that Falcons’ soccer star Jade Kovacevic now holds the OCAA record for most career goals in women’s soccer. During the Falcons match with the Mohawk Mountaineers on Sept. 21, where the Falcons won 5-0, Kovacevic scored four goals. The game brought her total career goals to 84. Nicole Nielsen also scored a goal during that match.

A few days later, on Sept. 24, Fanshawe Athletics announced on behalf of the OCAA that Kovacevic is one of the OCAA Athletes of the Week for the week ending on Sept. 15.

As said in a Fanshawe Athletics media release published Sept. 14, Tiffany Johnson, who played on the Cambrian Golden Shields’ women’s soccer team between 2014 and 2017, previously held the record after she scored 83 goals during her athletic career.

Along with her new record, Kovacevic is also a three-time OCAA Player of the Year, still carrying that honour, and reigning Canada Collegiate Athletic Association (CCAA) Player of the Year, and was the 2018/2019 OCAA and Fanshawe Female Athlete of the Year. Her other Provincial and Fanshawe Athletics records in the 2018/2019 season include most goals in a season with 30 goals, most goals in a playoff game with five goals, and most goals in a regular season game with nine goals. During her first three years with Fanshawe Athletics, Kovacevic scored an average of 26 goals per season.

In a Fanshawe Athletics press release, published on Sept. 21, the soccer star expressed her enthusiasm.

“Setting the OCAA record for most career goals is an achievement I have been striving for throughout my career with Fanshawe,” said Kovacevic. “I am proud to have added this to my accolades but the highest priority is still for our team to finish with a clean season, winning provincials and hopefully nationals as well.”

Kovacevic’s new record is just part of the Fanshawe women’s soccer team’s success in the 2019/2020 season. Fanshawe Athletics announced on Sept. 24 the women’s soccer team is currently the top second team in the CCAA, one spot higher from the previous National third place title.

Looking at statistics and results on the Fanshawe Athletics website, the Falcons also most of their games, including kicking off the season with a 2-1 win over the Sheridan Bruins during Falcons Fest on Sept. 7. Standing at 3-0-1 overall in the 2019/2020 season, the women’s soccer team’s only non-win was a 1-1 tie with the Humber Hawks on Sept. 11.

After the Falcons face the Niagara Knights on Sept. 27, Fanshawe’s women’s soccer team faces the Lambton College Lions on Oct. 2.

Visit fanshawefalcons.ca for your latest updates on all of the Fanshawe Falcons teams.