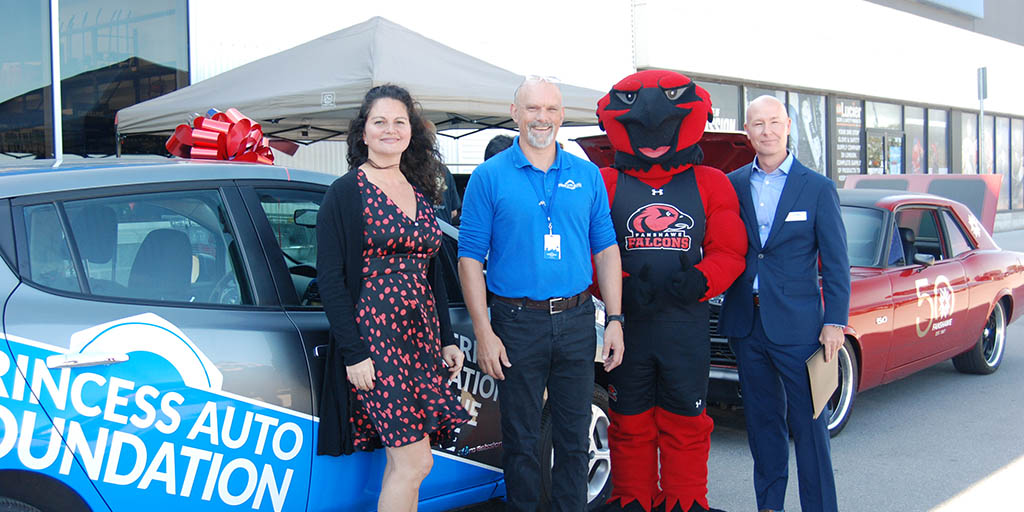 CREDIT: EMILY STEWART
(Left to right): Program manager for the Faculty of Science, Trades and Technology Tracey Davies, Princess Auto London store leader Jamie Vanderweyst, Fanshawe Falcons mascot Freddie the Falcon, and dean of the Faculty of Technology Stephen Patterson in front the Nissan Leaf, which is a token of appreciation for the Princess Auto Foundation's support over time.

Fanshawe College honoured one of its long-time supporters.

The Princess Auto Foundation donated over $1 million to the College with annual gifts and an endowment to support over 200 bursaries for students in the trades, technology, and science programs every year.

Staff at the auto shop were presented with a Nissan Leaf vehicle featuring the Princess Auto logos and the statement “Powering education into the future”. The electric vehicle, wrapped in a red ribbon at the time of the event, will be used in the labs for the School of Transportation Technology and Apprenticeship students.

“Our students are indeed the future in our community, in our economy,” Tracey Davies, the program manager for the Faculty of Science, Trades and Technology said during a media scrum. “And as much support and just positivity I think goes a long way for students to know they are supported in a variety of ways.”

“We’re really trying to teach the students all the technologies,” she said. “Not only in the current mode of power, but also emerging technologies. This is a good chance to really kick start that.”

Davies added the car will be beneficial for the future automotive service management program, which is expected to welcome its first cohort in fall 2020. The first year of the program will focus on managerial duties in automotive service, with the second year emphasizing emerging technologies.

Jamie Vanderweyst, the Princess Auto London store leader, said in a speech that he read thank you cards sent from students over the years, and a couple of the messages touched his heart.

“Some of them are like ‘OK, I’m going to need a minute after I read that,’” he said.

He also said in a media scrum the Princess Auto Foundation’s office is in Winnipeg, Man., and the foundation provides financial support to students in skilled trade programs across the country.

“I think we look at our customer and we realize that a lot of our business comes from the trades and students are the future of that business,” Vanderweyst said.

In a follow-up email with Interrobang, Vanderweyst said that the foundation donated over $4 million to students in skilled trades programs across Canada.

Stephen Patterson, the dean for the Faculty of Technology, said the Princess Auto Foundation bursaries fill in the gaps in the skilled trades, which need more workers.

“There is such an amazing deficit still in within the skilled trades industries and sectors that these kind of donations and this kind of awareness raising and promotion is very key,” he said.

“We talked a lot about women in trades. We talked about youth in trades and non-traditional folks that, demographically, haven’t always been involved,” he said. “And try to break down the stigmas of what trades are and how to be associated because it’s for everyone and traditionally, not everybody’s always felt that way.”
Fanshawe College Skilled Trades The Princess Auto Foundation