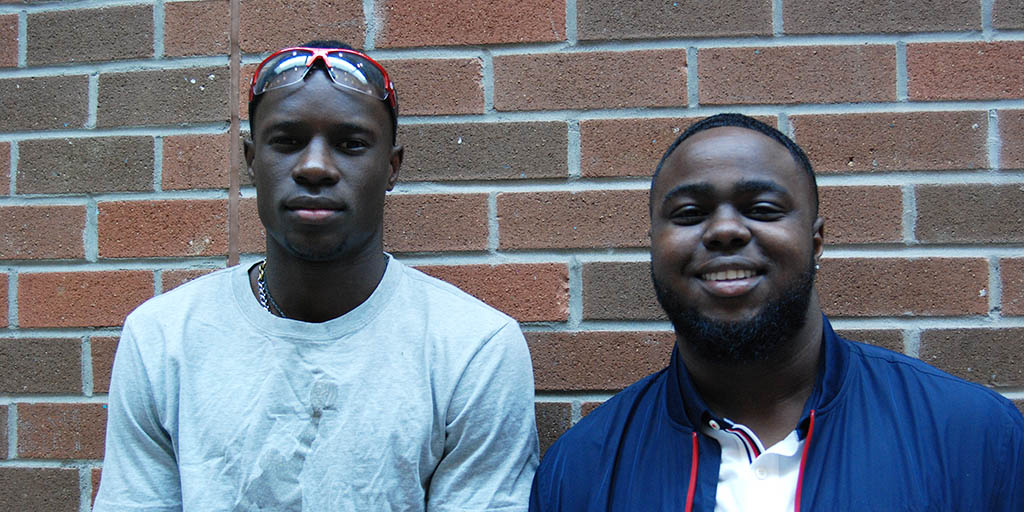 CREDIT: EMILY STEWART
Campbell Walker (left) and Leslie Knowles (right) are two students from the Bahamas looking to give back to their country after Hurricane Dorian.

You can help those affected by the devastation caused by Hurricane Dorian in the Bahamas by donating food, hygiene products, and clothing donations.

The UN said that the Category 5 hurricane, which hit the Abaco Islands and Grand Bahama Island on Sept. 1, left 50 people dead and 1,300 others reported missing as of Sept. 14. The UN, as mentioned in previous Interrobang articles, published Sept. 13 and Sept. 17, estimated about 76,000 people lost their homes. A CNN article published on Sept. 13 said 3,900 people left the Bahamas and arrived in South Florida.

“We had a number of students from the Bahamas come up to us and say that they wanted to fundraise for this and how they can do that,” she said. “So we’re very happy to support them in that, but I really do think it’s important to highlight the importance of these people coming forward.”

Brown also said that the FSU told the students of available services they can use for support. Fanshawe’s International Centre is offering support services, and the Sharing Shop is considering making an exception on the item limit for students from the Bahamas.

Brown also said that there are some students from the Bahamas who are directly affected by the hurricane.

Campbell Walker, a carpentry and renovation techniques student, said in an email to Interrobang that the hurricane damaged his childhood home, which “was literally filled with water up to the ceiling”. He acknowledged that, however, the house still stands, which is not the case for many of his relatives and neighbours. He’s been in touch with his friends and family back home about the hurricane.

“My mother constantly tells me to stay strong and not to worry so much on them because she doesn’t want it to affect my work here at Fanshawe,” Walker said. “But as far as from friends that I’ve talked to [they’re] just grateful to be alive because we all lost a lot of family and friends in this storm.”

His friend Leslie Knowles, a fourth-year digital marketing student from the Bahamas, said that knowing the devastation caused by the Hurricane, including his friends have losing their homes and some families with missing relatives, he wanted to give back to his community.

“Even though I’m over here, I still want to help my country,” he said.

Knowles said that since his family is from a different island, he wasn’t directly affected, but he knows several who were, including Walker. He encourages students to also share updates on the situation to spread awareness, and to imagine themselves in that situation.

“My family wasn’t really affected. I could just say ‘Oh, it isn’t about me,’” Knowles said. “But if you think about it, that’s innocent people who just lost their homes. One day they had it, and the next day they didn’t.”

Spaces to breastfeed available on campus