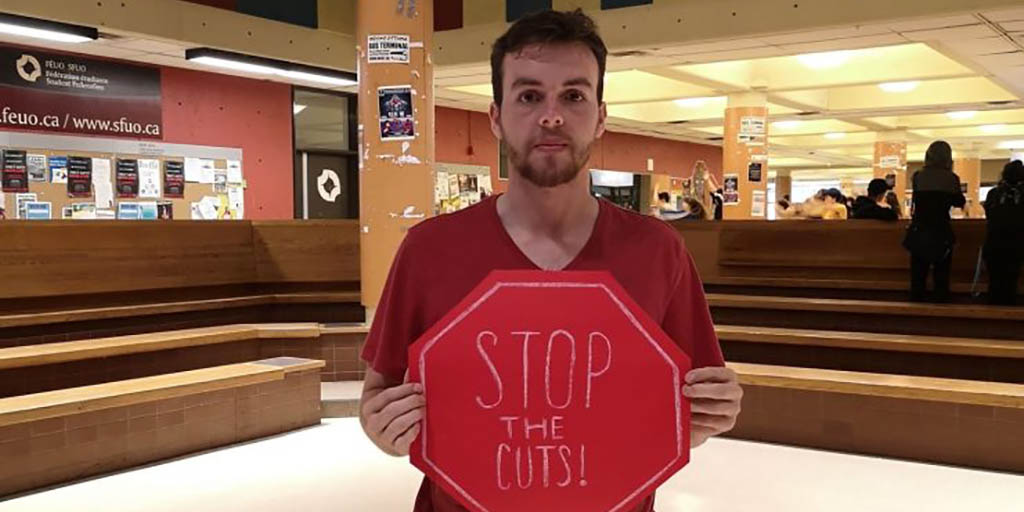 CREDIT: THE FULCRUM
James Casey is a third-year political science and economics student at the University of Ottawa.

OTTAWA (CUP) — Growing up in a single- parent household opened me up to some of the hardships I would have to endure later in life. But I didn’t fully realize just how independent I would have to be in university until my mother sat me down and told me she wouldn’t be able to financially support me at all.

I started preparing early. Before my first year of university, I took a victory lap and worked full-time in a factory to save up the money to pay for school. As a university student, I’ve always had to work full-time to be able to afford my education, but I still had to take time off from school last year to make enough money to get by.

With the cost of education and housing going up every year, it’s becoming more inconvenient and unaffordable for students, especially in Ontario, to go to university. When the previous provincial government made it more affordable for low-income students to pursue post-secondary education, it was a game-changer. It didn’t relieve a lot of the hardships for young people like myself, but it made the burden of affording an education easier to shoulder.

When the current provincial government made the announcement that they would eliminate subsidized tuition for low-income students, I knew immediately I would be affected. Like many students this year, I looked at my Ontario Student Assistance Program (OSAP) estimator and saw thousands of dollars less in grants. These changes to OSAP have forced me to take the entire year off school due to a lack of funding.

To say I feel frustrated and stressed about these cuts to OSAP is an understatement. As a student with anxiety and depression, the pain this policy has caused me is incomprehensible. Ford’s cuts to OSAP don’t only affect students already enrolled in school, but also students trying to get back into school and others wanting to go to university in the first place.

Students and young people should not have to worry about whether they will be able to go to school because of the family they were born into. We should be worried about doing well in class, not any of the problems the Ford government is causing young people in this province. These cuts are dangerous for so many vulnerable people.

For a government that says it wants to tackle provincial debt, it seems student debt doesn’t count. In a province as wealthy as Ontario, we should not be working multiple jobs and still face an inaccessible post-secondary education system.

Coming from a working-class family has helped me cope with the stigma of being a low-income student. I am proud of my background. For many students and young people in my position, it is hard to speak openly about finances and economic status. But with the courage of so many voices across our province being publicly brought forward, we can make a difference.
Editorial opinions or comments expressed in this online edition of Interrobang newspaper reflect the views of the writer and are not those of the Interrobang or the Fanshawe Student Union. The Interrobang is published weekly by the Fanshawe Student Union at 1001 Fanshawe College Blvd., P.O. Box 7005, London, Ontario, N5Y 5R6 and distributed through the Fanshawe College community. Letters to the editor are welcome. All letters are subject to editing and should be emailed. All letters must be accompanied by contact information. Letters can also be submitted online by clicking here.
Doug Ford Ontario OSAP Tuition

1
Ont. freezes tuition for another year, but I'm still feeling icy
2
Why is international tuition so expensive in Canada?
3
Get wander-lost in Ontario
4
Online learning could be the key to educational accessability
5
A mini guide to financial aid