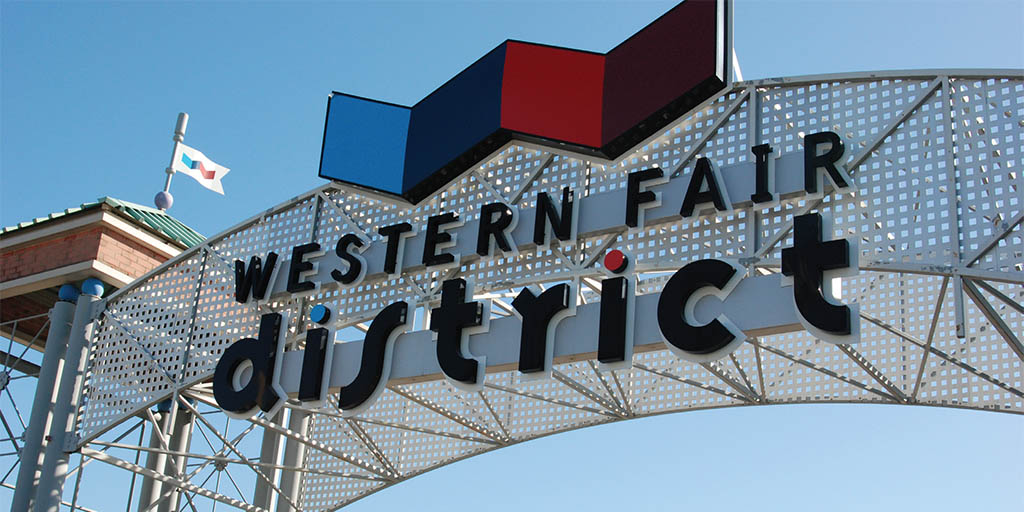 Greg Blanchard, the Western Fair District's director of marketing and communications, said the district and its events like the Western Fair provide a "unique and different" local music venue for artists like Saveria, Texas King's Jordan MacDonald and Sarina Haggarty.


When visiting the Western Fair, be sure to catch musicians from Fanshawe College’s music industry arts (MIA) program perform at the I Love Local showcase.

Greg Blanchard, director of marketing and communications at the Western Fair District, said that I Love Local features performances with local musicians and dishes with regionally sourced ingredients. He said the 10-day music series became a “favourite” part of London’s tradition and that it’s rooted in two aspects integral to the Western Fair community and music.

“To support the local music community just makes sense for us,” he said.

Blanchard sent a press release to Interrobang announcing the performers for the I Love Local tent at the Western Fair and other details about the long-running Forest City tradition. Second year MIA student Sarina Haggarty and MIA alumni Saveria and Jordan MacDonald of Texas King are slated to perform.

Blanchard said the Western Fair District and its events throughout the year provide a “unique and different” local music venue that can boost the local musicians’ careers. Haggarty, for instance, previously performed at the district’s Camluck Classic event, which Blanchard said is the closing night at the racetrack.

“These are performers that we’re helping to nurture and develop with this,” he said. “And they’ll be entertainers that we’ll lean on hopefully for years to come as part of the fair.”

Haggarty, who grew up in London, said she enjoys attending the annual fair, especially riding the Niagara Falls ride and eating ice cream and cotton candy. She’s looking forward to returning to the Western Fair as an I Love Local performer.

“Everyone loves live music so it’s cool that they have lots at the Western Fair every day,” she said.

Haggarty has plenty of shows and new music coming up, and said she’s looking forward to “work hard, pull all-nighters, and get stuff done” when she returns to school and balances her performances. Although she already established herself in the local music scene before Fanshawe, she enjoyed meeting new musicians in her first year and became interested in the program after fellow MIA alumni talked about the program positively.

“London is very fortunate to have [the MIA program] and there’s incredible profs as well.”

MacDonald also said she enjoys the rides and cotton candy, but the Arkells concert at the fair was likely his “favourite experience”. After playing at I Love Local and the Parkjam Music Festival, where the festival’s Facebook page said Texas King will play on Sept. 5, the band will embark on a North American tour with Big Wreck between Sept. 18 to late December. MacDonald spoke highly of the MIA program, noting it’s where he “learned a lot about performing and stage presence” and how Texas King met and came together as a band.

“You can see from all of the bands that have come out of MIA and all the artists and stuff, that it’s mostly good stuff,” he said. “If London wants to continue seeing good stuff, and listening to good stuff, then they should keep supporting people coming out of the program that produces good stuff.”

Saveria, known for her win on CTV’s The Launch, grew up attending the Western Fair annually, and is looking forward to playing at the event.

“My first concert was Down with Webster at the Western Fair and I remember being so fanatic about it and so excited to see people perform,” she said. “And I’ve always dreamt of being on that stage too.”

After The Launch, Saveria performed at major local music events like JunoFest and the Forest City London Music Awards. She was also announced as a performer for the Parkjam Music Festival Pop Night on Sept. 8.

“I’ve always wanted to do bigger stages and for bigger audiences and now it really makes me feel like I’m professionally immersed in the industries that Canada has.”

The MIA alumna, who graduated in 2018, said Fanshawe’s program developed her “sound as an artist” and taught her how to work with other musicians. Along with performing, she’s interested in producing music for other artists and is also “very passionate about songwriting”.

She encourages Londoners, whether they are fellow musicians or simply enjoy music, to check out local artists. She added being an emerging artist can be difficult with working “extra jobs” and dealing with “so many loopholes on how you can be successful”.

“We’re all aiming for that same goal to be in those positions where we can perform on bigger stages and have our songs explode on Spotify or on iTunes,” Saveria said. “I think it’s so important because we’re such a small community that we really need to rise all of us to the top and be as supportive as we can.”

Other MIA-related acts scheduled to perform on the website include Delta Stone and the Wardogs (Ryan McNevin,) and Averages (Taylor Holden).

The 144th Annual Western Fair runs until Sept. 15. General admission is $15 at the gates. Visit westernfairdistrict.com/western-fair to find out more information, including the full I Love Local schedule.