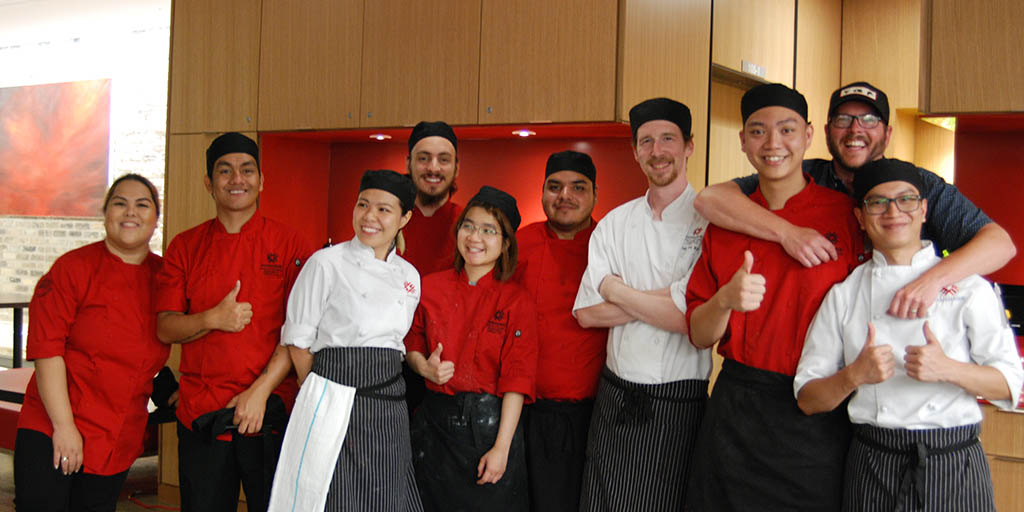 
You’ll have a chance to taste original dishes created by Fanshawe’s School of Tourism, Hospitality, and Culinary Arts students.

The Chef’s Table Restaurant and Café held a student competition on Aug. 21 that offered students a chance to be featured on the fall menu. Emma Rankin, the restaurant manager, said one each from the pasta, salad, and dessert entries would be featured on the menu. She also said the restaurant would declare winners from the Judges’ Choice and People’s Choice categories. The judges’ choice was announced later that evening.

She added the event is similar to another competition held during Juno Week in March 2019, where students prepared appetizers.

“We thought that instead of just having it canapé sized, why wouldn’t we try and include the students with the permanent menu?” Rankin said. “Hopefully each semester, moving forward, the students will have a chance to compete and actually have their dish featured on the menu.”

Rankin said that although the menus change with the semesters, there are some items that stick around with each menu change because of “popularity and demand,” like the burger, the crème brûlée and the carrot cake.

“Here we’re showing them and teaching them all different techniques and showing them what to do,” he said. “They’re taking all that training and putting it into something that they’re passionate about.”

Less than half an hour before the competition began, the Chef’s Table was full of diners chatting and ordering items from their summer menu. There were three salads, three pastas, and two desserts to pick. Along with the small sample plates for the guests, the students prepared a full meal sized plate for the judges to try.

Lots of people came to the competition to support the students, including local restaurateurs. Donna Arroyas, co-owner of Archie’s Seafood Restaurants, attended the event with her husband Alain Arroyas, who also owns Archie’s. She said they love to support Fanshawe whenever possible, especially when it’s time to recruit.

“We’re always looking for people to work and this is one of the prime places to get candidates,” she said. “In fact, we’ve had a few come.”

The Judge’s Choice dishes were announced after the food was served, most of the dining crowd left, and clean up began.

The following dishes won the Judge’s Choice, as announced at the event and confirmed by Rankin in a follow-up email with Interrobang:

Rankin also said in the email that she and Fee were two of the judges on the panel, along with hospitality technician Bridget Fee, Chef Patrick Hersey, and Professor Pascal Chambon.

The students, whether they won that night or not, collectively said the experience motivated them to become better chefs and make their mark in the culinary industry.

“We got to interact with the public a little bit more than just back of the kitchen,” Rivas Artega said. “It gives the opportunity to see both sides, seeing the customers’ appreciation and giving you feedback.”

Yen Thi Hong Nguyen, a baking and pastry arts management student who made sweet potato coffee cake, felt like her cake didn’t turn out how she wanted. However, the experience taught her a lot more about what she’s studying and her future goals.

“Now I see my mistake when I made this cake,” she said. “And I think I need to learn more with some amazing chefs here, and they can help me to pursue my dreams.”