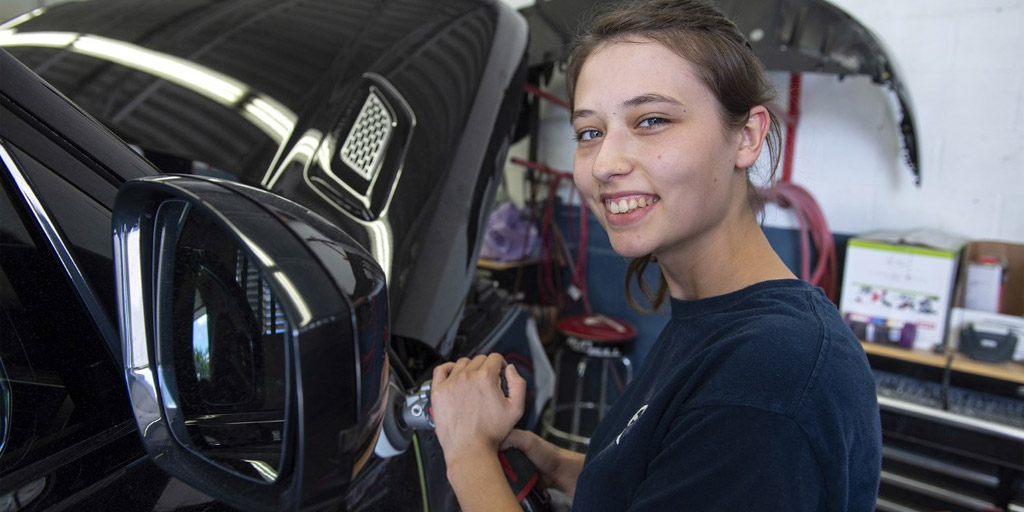 WorldSkills takes place every two years, where competitors in 56 skilled trades from over 60 countries compete for a prestigious medal in their chosen skill. In 2018, Friesen won gold and bronze medals in the car painting category at Skills Ontario and Skills Canada.

She competed again in May’s Skills Canada competition in Halifax, and learned soon after she had been chosen to go on to compete at WorldSkills.

“At the time it was about 12 a.m. because we had been waiting up to hear the results and I was pretty groggy. But after a while it started to sink in and it was just so exciting,” said Friesen of learning that she had qualified. “It still actually seems a little surreal.”

Friesen had been preparing for the competition with her trainer, a refinishing instructor at Fanshawe. They had been working together in his workshop two to three times a week.

Friesen, who works at Fix Auto London North West as a painter, said she decided to go into a skilled trade because she knew she didn’t want a desk job.

“I wanted a job where I could work with my hands. It’s kind of ironic though because now when it’s super hot out I sometimes think of how nice an air conditioned office would be,” she said. “I also had an interest in cars and knew I wanted to work on them” she added.

The skilled trades tend to be a male-dominated workplace. However, Friesen thinks that it shouldn’t stop women from entering the field.

“Don’t let the fact that you’re a female hold you back,” she said. “When I was in high school thinking about a career in a trade, I worried about not being strong enough, not being smart enough, or not being accepted…to paint cars doesn’t actually require me to be super strong…just focus on learning to do a good job, and that’ll prove your worth as an employee in the long run, and maybe even a competitor.”

After WorldSkills, Friesen has a few other goals she hopes to achieve.

“I can see my life going in so many directions, but I know that I definitely want to complete my certification. I haven’t been able to do so because you can’t be licensed in the trade if you want to compete,” she said. “Another goal of mine is to do some custom painting this fall with my trainer, but my ultimate goal with my refinishing skills is to somehow use them to benefit people who haven’t had the amazing opportunities and blessings that I have had. I just don’t know how that looks yet.”

Friesen will be competing Aug. 22 to 27.
Automobiles Fanshawe alumni WorldSkills