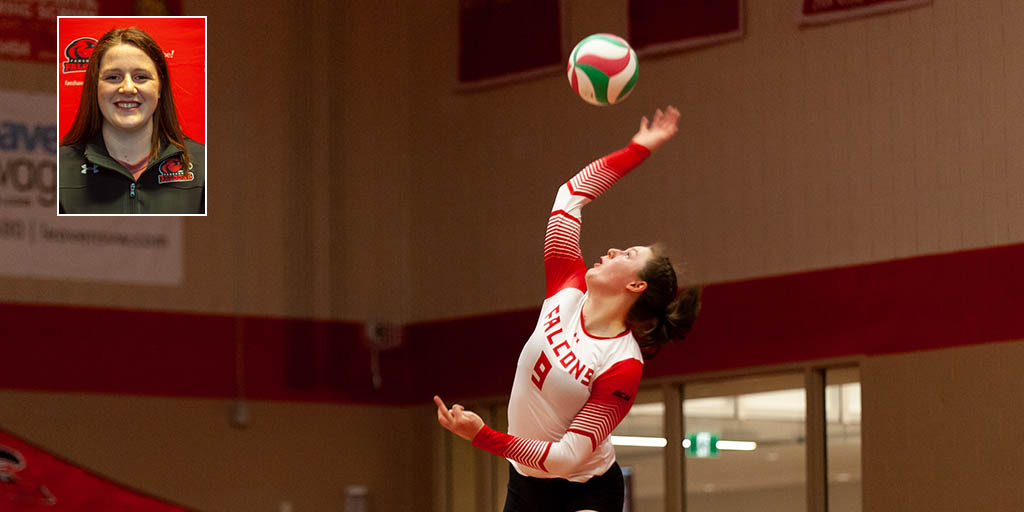 CREDIT: PROVIDED BY FANSHAWE ATHLETICS
Janelle Albert, outside hitter for Fanshawe Falcons, was named Ontario Colleges Athletic Association (OCAA) Player of the Year at the 2019 OCAA women's volleyball Championships and banquet in Sudbury on Feb.22.

The award was presented at a ceremony preceding the matches on Feb.22 marking the first time in Fanshawe Women’s Volleyball history that a Falcon has received the award.

Following the Falcons’ OCAA Championships gold medal win on Feb.24, Albert was named Championship MVP, in addition to Player of the Match in the Championships game. She is also a Canadian Collegiate Athletic Association (CCAA) All-Canadian, as well as an OCAA West Division First- Team All-Star.

As the leading scorer on the Fanshawe team, Albert led the Falcons through an undefeated 18-match regular season, the first in Fanshawe Women’s Volleyball history. She averaged 4.6 points per set and a .355 offensive kill percentage in the 18-match season, contributing 170 total kills and 18 blocks. For service aces, Albert led the league with 1.02 per set and a combined total of 54 through the season.

Sean Pellow, head coach of the Fanshawe women’s volleyball team, had nothing but positive things to say about Albert and her contributions to the team.

“Obviously she’s a super talented player, but she’s the calming factor to the team,” Pellow said. “When things get panicky on the court, she calms everybody down, and says ‘hey we’ve got this’ or ‘it’s not a big deal’”.

Albert is not only a great player, but a great teammate and a great leader as well.

Albert has since been nominated by the OCAA for the CCAA Player of the Year award. The recipient of the national award will be named on March 6, preceding the Falcons’ first match in the 2019 CCAA Women’s Volleyball National Championship in Welland on March 7.
Athletics Awards Fanshawe Falcons OCAA Volleyball

1
Beyond the blonde: Playoff hair, beards and superstitions in sport
2
Get involved with Fanshawe Athletics
3
What to expect from sports in 2021
4
Interrobang's top fall season Falcons
5
Falcons' regular season baseball ends on a high note despite two blowout losses