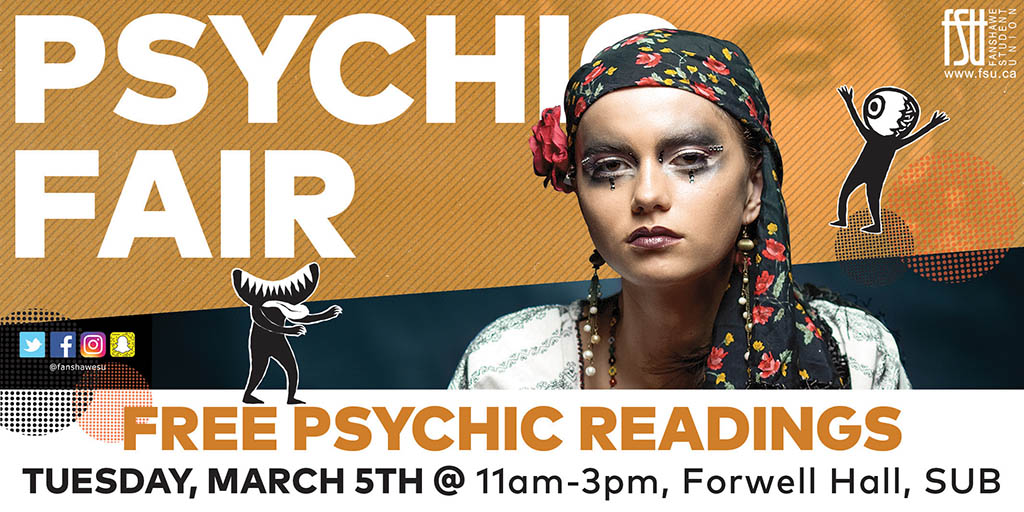 CREDIT: FSU PUBLICATIONS & COMMUNICATIONS DEPT.
The psychic fair is back at Fanshawe's main and downtown campuses.

The second of the semi-annual Fanshawe Student Union (FSU) psychic fair is coming back to Fanshawe.

The event will happen at Fanshawe’s main campus in Forwell Hall on March 5 and at the downtown campus (130 Dundas St.) on March 6. Both fairs will run from 11 a.m. to 3 p.m. on their appropriate days.

Kevin Masterson, FSU events and activities manager, said that the fair has been quite the hit with students in the past.

“The psychic fair is something we have been doing for the past few years,” Masterson said. “It really is a popular program with the students. We bring in a bunch of different psychics or tarot card readers and students just line up [and] get their fortune read for free.”

According to Masterson, many students go to the fair to seek answers about different aspects of their lives.

“People often question the future, obviously and to have someone tell you what is going to happen is always exciting,” Masterson said.

“She (the psychic) knew that both of my real grandmothers died. She knew one of my grandmother’s names. She then told me I was going on a vacation after school was over and I was. I planned to go to Dominican in May. So definitely after that experience I believe in psychics and that they truly know how to tell what’s going on in your life,” Van Overloop said.

Another Fanshawe Student Sarah McCarthy, said that she is a little skeptical when it comes to validity of psychics.

“I think psychics do have intuition about people, however it’s hard to tell the fakes a part from what could be considered actually real. So in my opinion, it’s hard to tell or know if there are true psychics,” McCarthy said.

Masterson said that overall, the programming has been taken in positively by the students and continues to be a success.

“It’s easy programming that just puts a smile on peoples face,” Masterson said. “It reminds you that you’re going to be okay. Generally, I would say, the psychics tell you something positive about your future. [Whether] it’s about your relationship, career, or whatever.”

Masterson went on to say that the FSU is continuing to grow the event.

“We have expanded the amount of psychics we have brought in, they are all local. Every time we do it we just get a great response from the students and they seem to really like it,” he said.