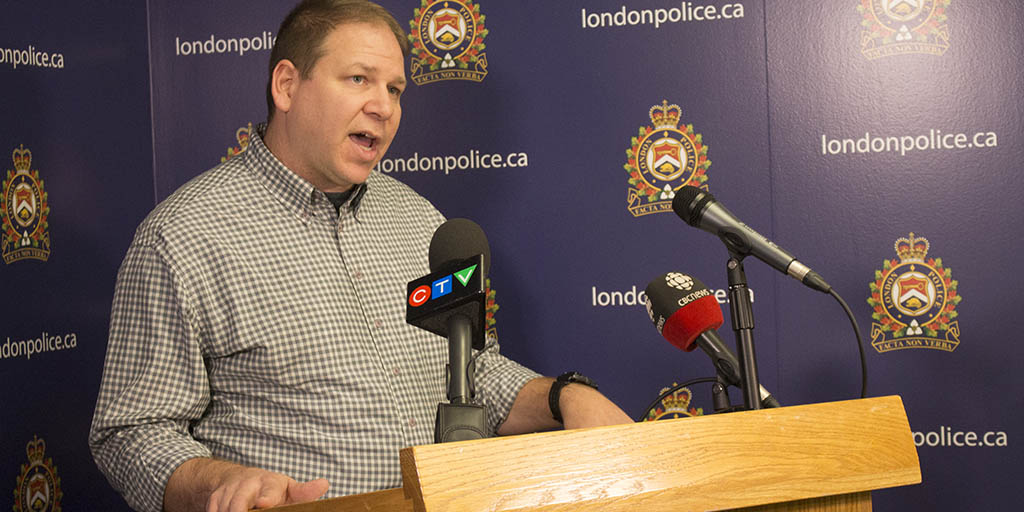 More than two dozen men were charged with obtaining sexual services and contact was made with more than 50 women and girls involved in the sex trade during a sex-week project targeting human trafficking in London, Woodstock, St. Thomas and Strathroy.

According to a Dec. 7, London Police Service (LPS) press release, the ages of those contacted were between 16 and 41 years and included high school and post-secondary students. The majority were from London, while others were from the Greater Toronto Area (GTA), Quebec, Hong Kong and smaller Ontario cities.

The initiative, called Project Circuit, was a joint-force operation led by the LPS that included officers from Strathroy-Cardadoc, St. Thomas and Woodstock police services and the Ontario Provincial Police (OPP), a LPS crime analyst and a representative from the Ministry of the Attorney General.

Several ‘john stings' were conducted as part of the project, wherein an ad was posted on line for six days.

“I was shocked at the number of texts we received to our advertisement that was posted. It was viewed over 9,000 times over the course of this project, and we continue to receive text messages to the number that we used in this particular probe. This speaks to the volume and the demand that is fueling the exploitation of women in our community,” Det. David Ellyatt, head of the Human Trafficking Unit in the LPS, said in the press release.

“The primary focus of Project Circuit was to make personal contact with women involved in the sex trade and to offer assistance so it was really an overwhelming success,” Ellyat said. “We made contact with 56 women and girls and were able to help two victims of human trafficking get out and get help.”

During a Dec. 7 press conference, Ellyat explained that officers posed undercover as johns and used investigative techniques to meet with the women and girls to hear their stories and discuss a safety plan.

The women and girls were offered assistance through police victim services and local women's support groups. They were also offered backpacks that contained clothing, toiletries, and gift cards to assist in getting them home.

The LPS Human Trafficking Unit was created in January 2007, in response to the ongoing issue of human trafficking in the community. Ellyat said that the name “Project Circuit” refers to how the region belongs to a circuit widely used by human traffickers.

“London sits on the 401, and we're a medium size city in southwestern Ontario,” he said. “The circuit reality is really the 401 highway.”

He later added his thoughts about the state of human trafficking in London.

“Absolutely I believe London is a hub for human trafficking,” Ellyat said.

Ellyat said that there are common themes when it comes to recruiting human trafficking victims, such as pimps manipulating women by pretending to have a romantic interest in them. Younger women are particularly susceptible to recruitment over social media.

Ellyat said the LPS will launch a program in conjunction with school boards to educate students on how the recruitment process works. There will also be new trafficking hotline coming out in the near future.

Anyone who suspects they or their friends are vulnerable to human traffickers can reach out to the LPS, or alternatively community partners such as the London Abused Women's Center or ANOVA. Fanshawe students can reach out to the College's sexual violence prevention advisor, Leah Marshall at lkmarshall@nullFanshaweC.ca
Human Trafficking London News Sexual Violence Social Media Student Safety