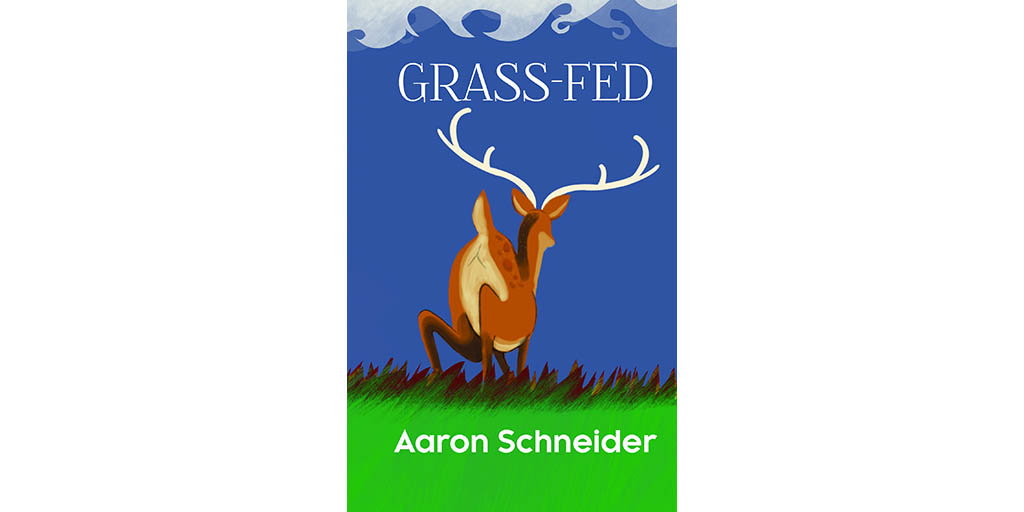 CREDIT: COVER ART FROM QUATTRO FICTION
Venison isn't the only thing on the menu in Aaron Schneider's debut book, Grass-Fed.

The main characters in Aaron Schneider's book, Grass-Fed, are just like any other academic, artist, businessman, talk show host, and retired hockey player you may know.

However, it's their collective taste for human flesh that earns Schneider's work a “horror” classification on Amazon.ca.

“Grass-Fed involves a bunch of lightly fictionalized Canadian cultural figures killing and eating some people,” Schneider told Interrobang before reading an excerpt as part of the final instalment of this year's Letters and Arts Society reading series earlier in November.

Told in multiple storylines, Grass-Fed is the story of what happens when these characters meet at a hunting lodge and resort in Northern Ontario. It explores the lengths they will go to justify indulging their specific tastes.

Beyond the gore of it all lies Schneider's scorching satirical wit.

“I'm an angry person who has shockingly left wing politics, so I like to write about the hypocrisy of Canadian culture,” Schneider said.

He added that his current workin- progress revolves around London's armoured-vehicle industry.

The critical take on London's economy is a concept that Schneider said he owes to the process of writing Grass-Fed.

“It helped me really solidify the sense of the way in which I want my writing to be political,” Schneider said.

Schneider's interest in writing began while growing up in an isolated restored log house amid remote farmland north of Owen Sound. His “hippy” parents read him J.R.R. Tolkien's Lord of the Rings at a young age and sent him to school wearing handmade clothing — an experience that inherently gave Schneider a unique perspective on the mainstream world.

“I have a very odd background. I was raised sideways to most Canadians,” he said. “It certainly informed my politics and my take on any number of things.”

After a phase of what Schneider called “writing terrible teenage poetry”, he went on to study English in university. He eventually earned a PhD and is now an assistant professor in the department of English and writing studies at Western University.

He is also co-founder of the London- based literary journal, The/ tƐmz/Review, as well as its publishing arm, 845 Press. The/tƐmz/Review publishes submitted pieces of fiction, poetry and reviews in four issues per year, and puts out chapbooks. Before Grass-Fed, Schneider published shorter pieces in the Danforth Review, Filling Station, The Puritan and Hamilton Arts and Letters, among others.

Schneider said he juggles his life as an academic instructor, literary editor and writer by maintaining a rigorous routine he began in the summer, rising early each morning to write at least 150 words before beginning his day. It's a lifestyle that he admits might not work for everybody, but enables him to look at writing from multiple perspectives.

“From a teacher's perspective, I think something that makes a good story is something the person who's writing it is invested in and interested in,” he said. “I'm always leery about saying what stories should be — one of the things I do is edit — I want other people to show me the possibilities. But at least for me, I think good stories engage the world on some way, and tell us something about our lives. Sometimes that's critical, and sometimes that's the simple work of reflecting who we are back to us and how meaningful that is for some people — especially people who don't see themselves.”