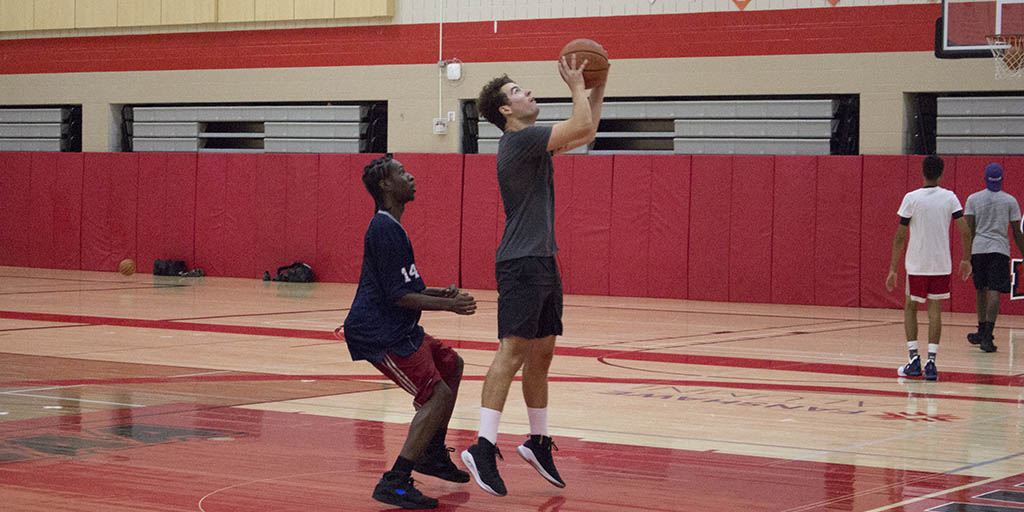 A number of intramural sports, including basketball, are open for Fanshawe staff and students to play throughout the school year.


A new fall term means another year of intramural sports with Fanshawe Athletics, the largest college recreation program in Ontario.

Unlike varsity, intramural sports are played non-competitively. Anyone from the Fanshawe campus community – students and staff – can join in the sport of their choice and play for fun, or to let out some pent-up steam.

“When you’re sitting in class and you’re overwhelmed with work or home-life or whatever, sometimes it’s nice to get out of your head and into your body and move around,” Jackie Corby, Fanshawe’s campus recreation athletics officer, said. “We all know it’s mentally healthy to stay active.”

Corby added that Fanshawe’s intramural program is unique from other colleges since it arranges game times according to student members’ schedules. Most teams are arranged based off of who is available and when.

“It is labour intensive for sure,” Corby said of putting the times together. “But it’s for the benefit of the students.”

Those who can’t make the daily times or prefer to wind down with some exercise at the end of the day are free to take advantage of the program’s late night recreation times, operating most Sundays, Mondays, Tuesdays, Wednesdays and Thursdays from 10 p.m. to midnight.

Over the past five years, cricket has become one of the most popular sports in the program, said Corby, thanks to international students bringing their passion for the sport to the College.

To meet high interest, a drop-in timeslot for cricket has been added to the regular roster of drop-in sports, designed to accommodate students who still want to play even though their agendas aren’t flexible enough to allow for a steady commitment.

While intramural teams are open to all players at a variety of levels, some can be more competitive than others. Players who are relatively new to the sport of their choice are recommended to learn at a more relaxed pace through the program’s drop-in sessions.

After becoming a regular, the first-year marketing student soon found himself in charge of setting up the nets and recruiting his friends, along with his friends’ friends, into games.

“It’s competitive but not so much to the point where you can’t have fun,” Almoro said. “There’s a lot of people who come who actually know how to play and they’ll teach you how to play instead of telling you, you can’t join. That’s why people like it so much, and that’s why people’s friends can come and join and it’s not a big deal.”

In addition to playing at scheduled games throughout the year, intramural team members will have the chance to participate in tournaments. Registration deadlines and fees all for intramural activities can be found at fanshawefalcons.ca