VICTORIA (CUP) — Outside the needle exchange on Cormorant Street in Victoria, a body lies curled up on the pavement under a white sheet. The sign says “open,” but the door is locked and it rattles when I try to open it. The figure under the sheet stirs. When a social worker finally opens the door, she says, “Sorry. Maybe you can come back tomorrow — this isn't a good time.”

The person on the pavement moves and the sheet falls away from his face, revealing red, raw lesions on his cheeks. Crystal meth users sometimes experience paranoia and the sensation that insects are crawling under their skin, leading to incessant scratching and picking. He looks like he's in his 20s, but he might be younger.

“You could interview him,” the social worker says. “But you might have to wait a few hours.” 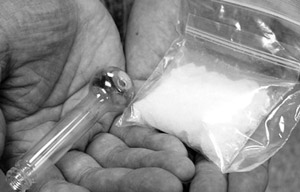 Crystal meth is infamous for its toxic ingredients: it may contain Drano, battery acid and bleach. It can cause psychotic episodes and violent, unpredictable behaviour. Users can swallow, inject, smoke and snort the typically white, odourless powder. Unlike plant-based cocaine and cannabis, crystal meth can be made with a handful of over-the-counter chemicals, a few beakers, Bunsen burners and a bathtub.

Users of crystal meth cross all socio-economic boundaries, but the provincial government considers youth at a high risk of addiction because the drug is cheap and readily available.

Over the last 10 years, crystal meth has become more common in Victoria, and the Youth Empowerment Society, which runs the specialized youth detox program, has seen a greater demand for services. YES has five beds and is the only youth detox centre on Vancouver Island. Currently there are about 18 names on the waitlist, which means some will have to wait up to 40 days for treatment.

At first, crystal meth improves focus and reduces the need to sleep. Users can go to school, study all night and function well, but Chris Goble, the specialized youth detox co-ordinator at YES, estimates that users have about a month and a half before they crash and lose the ability to perform even basic tasks.

Crystal meth is an appetite suppressant, and users can lose between 20 and 30 pounds a month, one of the main reasons why girls use the drug more than boys. Goble estimates that before crystal meth was on the scene, 80 per cent of YES's clients were male, but as the number of crystal meth referrals increased, so did the number of girls. Now about 70 per cent of clients are female.

“If you look at young girls, there's huge media pressure, social pressure and peer pressure to look a certain way,” says Goble. “Someone says, ‘Here, you can take this drug and lose 30 pounds.' I know a lot of adults who would jump at that.”

In August 2004, the government of British Columbia released a report called Crystal Meth and Other Amphetamines: An Integrated B.C. Strategy to identify the problems and outline a solution to deal with crystal meth. The report identified five goals: to inform the public, to build safer communities, to identify high-risk populations, to increase the skills of service providers and to reduce harm to individuals.

However, many people who work with crystal meth users feel that more resources are needed to help addicts.
Todd Wellman is head of the targeted policing division of the Victoria police department. His division works with street issues such as panhandling, drug trafficking and prostitution.

“Without treatment and education, we're just the big bad cops doing enforcement without the ability to even make a referral and help somebody out in the interview room when they're at rock bottom,” he says. “They're still people, and if they were asking for help we'd love to be able to help them — but where do you send them?”

According to the 2004 annual YES specialized detox report, the number of youth referred to detox programs for crystal meth addiction rose to 61 per cent from 11 per cent between 2000-2001 and 2003-2004. People referred for heroin use dropped to five per cent from 41 per cent during the same period, while cocaine use went to 20 per cent from 19 per cent.

People can become addicted to crystal meth quickly. Because it's so cheap, it's often mixed into cocaine or ecstasy and sold to unknowing customers. The integrated strategy said that 65 per cent of ecstasy sold at raves contains varying amounts of crystal meth.

“Right now we're fighting the symptoms. We're battling the addicts and the consequences of their addictions,” he says. “And you can't solve anything simply by enforcement.”
- Todd Wellman, Victoria Police Department

“It's very rare that a kid starts with heroin. They smoke pot. They drink alcohol. It's kind of a gradual thing and a fairly long process,” says Goble. “But I'll get 13-, 14-, 15-year-old girls saying, ‘(Crystal meth is) the first drug I've ever tried.'”

Acute physical withdrawal — not psychological withdrawal — from heroin and cocaine produces flu-like symptoms and is usually over in five to seven days. Goble says there's a lot of discussion in the medical community about how long it takes to physically withdraw from crystal meth, with estimates between 10 days and two to three weeks. Crystal meth withdrawal typically causes a rapid swing in emotions, from extremely happy to despairing, from calm to irate.

“By day four and five, the analogy I use is their emotions are like a big storm — the waves are really big and really close together,” says Goble. “This is almost identical to bipolar disease. They've done damage that makes them much more susceptible to things like schizophrenia.”

According to the B.C. Ministry of Health Services, the number of deaths related to crystal meth rose from two in the year 2000 to six in 2004. While deaths from the drug are relatively rare, psychosis is not.

A person suffering from crystal meth psychosis exhibits symptoms similar to schizophrenia, such as extreme anxiety, paranoia and delusions. Doug McGhee, a Victoria physician, says that MRI scans show that brain activity and anatomy are abnormal in crystal meth users, which correlates to difficulties with language, motor skills and memorization. While scans also show that brain anatomy can return to normal over time, the behaviours can remain, suggesting long-term or permanent brain damage.

“If we look at the long term, 18 months down the road, their scans look better, but they still have problems with language, motor, shifting tasks and abstract thinking,” says McGhee.

McGhee also says that users can become sensitive to the drug and quickly become psychotic again even if they have stopped using the drug for an extended period.

“Some people can quit using the drug and use a small amount down the road, and immediately re-experience psychiatric side effects,” he says.

Crystal meth can make some people violent. Goble, however, says he has experienced very few problems with violence at YES.

“We've had probably 750 kids referred to us, and I can maybe count five where violence has been an issue. Some of that is the model we're using. We're not in a confrontational role with them,” he says. “If they're put in a situation where someone is saying no, they don't necessarily have the ability at that point to function. So, you have to use a lot of counselling skills, de-escalation. Which is easy for me to say: I'm not a police officer.”

Sgt. Lance Philip from the Targeted Policing Division estimates that last year there were about a dozen cases of people caught carrying or trafficking crystal meth, but this year there are far more. The police have noticed a definite increase in the number of street youth nd high school students using the drug.

Current procedure dictates that the police try to contact the parents or guardians of youth high on crystal meth. If the parents can't handle the youth, they're kept in a holding cell until they calm down. If there are repeated offences, the youth may be arrested.

“Think how much time it would save if we were able to get some kid strung out on crystal meth and take him to a resource centre,” says Philip, “as opposed to putting him through the court system, where he gets nothing, and arrest him again the next week and the next week.”

Wellman agrees. “Right now we're fighting the symptoms. We're battling the addicts and the consequences of their addictions,” he says. “And you can't solve anything simply by enforcement.”

Police, social workers and the integrated strategy agree that education is paramount. The government has proposed programs in schools and the provision of pamphlets and brochures in needle exchanges, methadone clinics and other community service centres. But they haven't increased funding to withdrawal services.

“There has to be resources out there for people who are considering using it or are addicted to it,” says Wellman. “And there just isn't.” Despite the lack of resources, McGhee feels that the community of Victoria has done a good job of bringing attention to the problems of crystal meth.

“We've had dozens of community events about crystal meth. All the media have gotten on it. The street kids are making a magazine called Flail. There's a video that's been done locally. The minister of mental health and addiction created a document for the province. It's on websites.” He concludes, “Yes, we have this problem, but people know about crystal meth.”

According to YES, the number of youth who completed their individual withdrawal program rose from 71 per cent to 76 per cent between 2000-2001 and 2003-2004. Chris Goble believes that completion, even if there is a relapse, is a success because at least they're getting treatment — which is why he feels it's so important that beds are made available to youth who want them.

“No one sets out at 14 to say, ‘I want to be a crystal meth addict.' But whether they've become involved in the sex trade or breaking and entering or the justice system, they lose family connections, they lose housing, they lose school and employment,” says Goble. “They've lost enough of their soul, and we need to try and help them get it back.”

If you or someone you know is looking for information or local help with addictions or other drug related probelms, visit the Counselling and Student Life Centre at Fanshawe in room F2010.