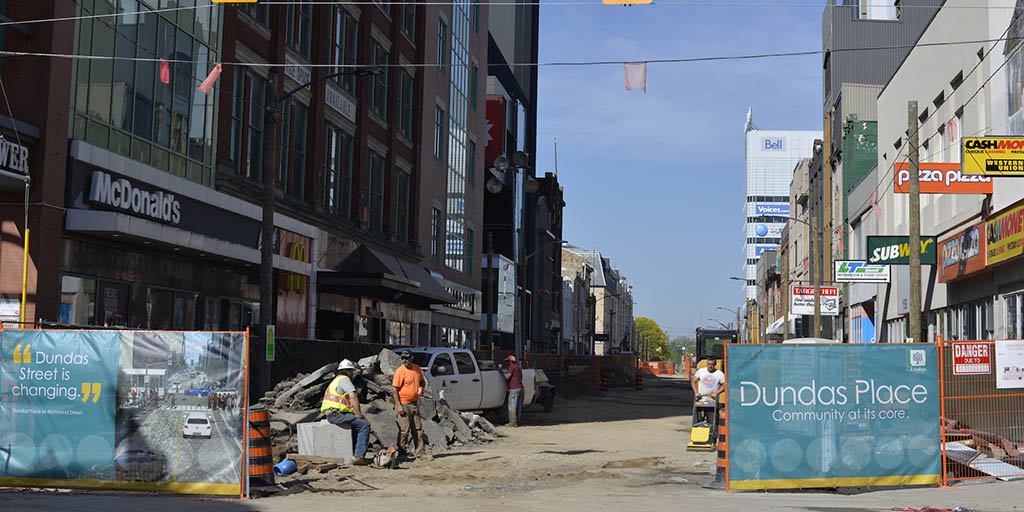 CREDIT: LLIAM BUCKLEY
City of London is getting a makeover of its downtown core, but how that impacts businesses in the area is something to consider.

The City of London is seeing some major changes in its downtown core, with the construction of Dundas Place, a project that will see conversion of Dundas Street from Wellington to Ridout, into London’s first flex street.

According to DundasPlace.ca the design will create a space that can be shared between pedestrians, cyclists and motorists. It will be a curbless street with large sidewalks and midblock cross overs to create a more open and inviting and enjoyable environment. Two-way traffic will continue to run through the downtown core except in the case of street festivals, in which case can be closed off for a fully pedestrian friendly space.

It will be some time until Dundas Street is fully converted however, as this two-phase construction project is expected to last over two years, with the bulk of phase one culminating in early September of this year. The construction means that a large part of Dundas Street is currently closed off from traffic with only the sidewalks open to pedestrians.

Interrobang spoke with local businesses as well as Jim Yanchula the downtown projects and business relations manager, to find out the effects this has had on business, what steps are being taken to assist businesses, as well as the positive impacts Dundas Place will have on the community once complete.

Brahm Wiseman, owner and operator of Heroes Comics was worried when the project was initially announced but has found the change of environment to not have a huge effect on his business. “Obviously, there was some concerns or scares that it might slow down business… with the street not being as accessible and traffic having a harder time getting down here. [But] so far it’s been fine, business is great,” Wiseman said.

Jeff Harvey the owner of Billy’s Downtown Deli, had a similar experience with no unexpected drops in business sharing that “business isn’t down, it’s where it usually is… because summertime restaurants tend to slow down a bit anyways”. Harvey was quite pleased with the support that he had received from the City during this time.

“They keep us informed every day, you hardly hear any construction,” Harvey said.

Not every business in the downtown core has had as positive an experience during the time of construction, however. Suzie March, an employee at Good Value Thrift Store has some “not so great” thoughts about the construction.

“Whenever the buses are rerouted our business goes way down so we knew that that was coming. But then the noise and the dust and everything else that came with it has been most unpleasant,” March said.

The Interrobang also asked March When asked about support from the City, during this time.

“I guess you could say they tried, but really I think there should have been something in place for the loss of business. We’re still having to pay the exorbitant rent and the bills with no business,” March said.

[Jim] Yanchula understood that some businesses faired better than others during this time and told how The City was doing everything possible to assist those that struggled.

“During the construction period there’s dislocation, like there is in every construction project…It’s just different for different businesses… the City can only do certain things under the law and The Municipal Act doesn’t allow a city to offer businesses money directly. So, what we try to do is make sure the navigation around the site is okay… [and] to let people know that businesses are open during construction,” Yanchula said.

Aside from the new look of the flex street, Yanchula shared that major construction has been due for quite some time when it comes to replacing the infrastructure that runs under the roads.

Considering this, the construction of Dundas Place became a great way to deal with more pressing issues while creating many additional benefits in the process.

When asked about considerations for Fanshawe students at the downtown campus, Yanchula had some words to say.

“We decided to go west to east not east to west. Which means…we should be up and running between the two Fanshawe’s by Sept 8,” Yanchula said. He cautioned however, that this date of completion was “barring any surprises. Especially in an older part of town where you can have the best drawings for what people say they installed a hundred years ago…But until you open it up you don’t know”.

Regardless of the positive and negative affects it’s had, most are excited for the completion of Dundas Place and the benefits of having a flexible communal space in the downtown core.

“We’re all looking forward to a nice beautiful clean street that will be used for events and continue to be used for business and traffic,” Wiseman said.

Overall, Yanchula has high hopes for the project.

“Of all of the people who can benefit from a reimagined Dundas Place, it’s certainly 2000 Fanshawe students who are going to be there for a long time to come.”

For more information and updated go to dundasplace.ca.