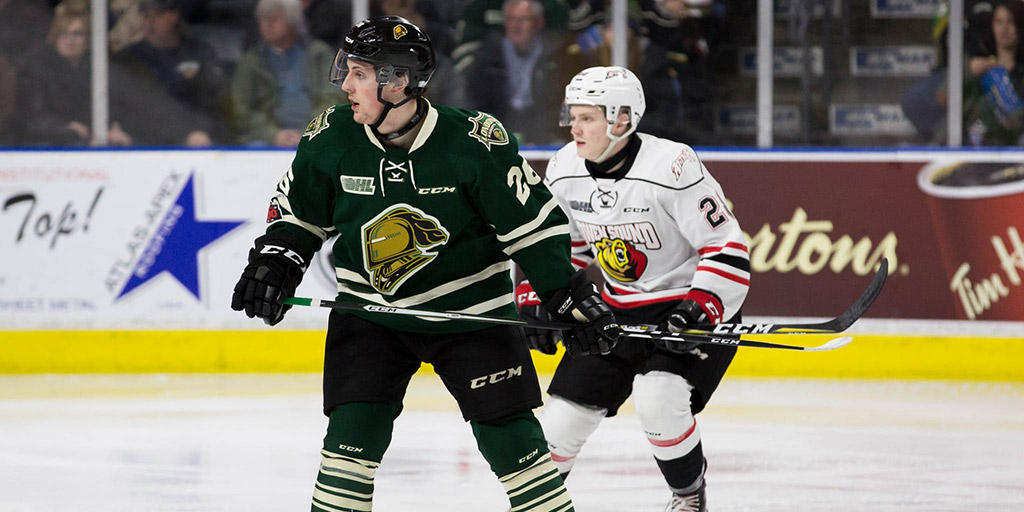 CREDIT: ANDREW STEPHENSON OF SHAKE MEDIA AND THE LONDON KNIGHTS
The London Knights did not make it past the first round of playoffs this year.

Tears, heartbreak and disappointment filled Budweiser Gardens, as the London Knights were forced to hang up their skates for the remainder of the postseason after being swept by the Owen Sound Attack in just four quick games.

Already faced with two overtime losses, no home-ice advantage and only losing by one goal a game in the series, the Knights eventually fell to Owen Sound's older and more mature unit this past Thursday, March 29, losing 2-1 in regulation.

With the Knights behind two goals to zero halfway through the third period of play, it appeared as though their season was a mere 10 short minutes from being over. And despite their best effort to cut the deficit to one goal late into the third courtesy of Knights #18 Liam Foudy off an assist by #80 Alex Forementon, the final buzzer eventually sounded signifying the end of a hard-fought season.

This first-round sweep courtesy of Owen Sound marks the first time that the Knights haven't proceeded to the second round of the playoffs since 2011 when they also fell short to Owen Sound in a 4-2 first-round series loss.

Recognized as a rebuilding year after losing players such as Victor Mete, and more recently trading away players such as Robert Thomas, Sam Miletic, Max Jones and Cliff Pu, the Knights found themselves without some of their top producing players as they embarked on their playoff run.

With a noticeable lack of veteran presence and maturity, Knights captain and a top NHL 2018 prospect, Evan Bouchard, couldn't help but accredit their post-season hiccups to the newer, younger, and less experienced London unit, that he is nonetheless proud to be a part of.

As stated in a post-game interview in reference to Owen Sound, “they are an older group. They know what it takes to win. That's something that we may not have had, but I think coming into next year [this season's playoff experience] will be really good for us,” Bouchard said.

Speaking of next year, what might it look like for the Knights? In terms of Bouchard himself, he is widely recognized as a top-10 pick in NHL draft that takes place this June 2018.

But in the chance that he ends up in a Knights uniform next season, he will be instrumental in getting the Knights back on track, demonstrating his leadership ability by earning the role of captain this past season while tying the club's 27-year-oldsingle-season scoring record for a defenceman - not bad for a guy who started out as a 4th-line defender at the beginning of the season.

As the Knights prepared for the 2018 OHL draft that took place on April 7, they have landed three of the top 25 picks, which they can plan to use to their advantage in what will surely prove to be yet another exciting and vengeful season, chasing that Memorial Cup title they once had just two short years ago.