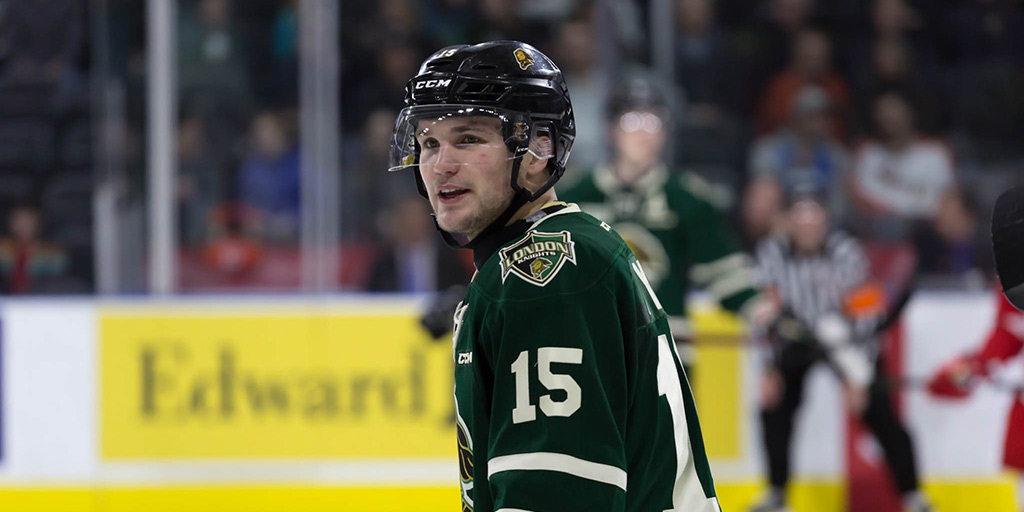 CREDIT: ANDREW STEPHENSON OF SHAKE MEDIA AND THE LONDON KNIGHTS
With time not on their hands, the London Knights need to quickly work together to try and move on up in the playoffs

Think about the best possible start the London Knights could have had in the 2017-18 post-season.

The exact opposite happened.

After a heartbreaking game three loss on March 26, the Knights find themselves down 3-0 in their Western Conference quarter-final series with the Owen Sound Attack. If they want to move on, they'll have to win four straight games against the Attack that boasts seven NHL draft picks.

If it's any consolation for Knights' fans, all three games were decided by a single goal.

In game one, Owen Sound squeaked out a 5-4 victory in front of their home fans. If London had won their last regular season game, the match would have been at Budweiser Gardens instead. Regardless, the Knights' best players played like their best players in the game.

Alex Formenton scored two goals, while Evan Bouchard picked up assists on both, but it wasn't enough.

Philadelphia Flyers' fourth-rounder Maksim Sushko scored the winner for the Attack early in the third.

Richard Whittaker and Jacob Golden also scored for London in the loss.

This is a game that London should have, and needed to win.

The Knights led 3-2 heading into the third, thanks to another excellent performance from Formenton.

He scored a hat-trick in the first 21 minutes of the game, giving London a 3-2 lead heading into the third.

They managed to hold that lead for 19:11 of the frame. With just 49 seconds remaining in the game, Alan Lyszczarczyk scored on Joseph Raaymakers to tie it up.

Vancouver Canucks' pick Brett McKenzie did the rest, scoring the game winner just under five minutes into the extra frame.

It was a dagger for the Knights, who were poised to return home with the series tied 1-1.

Instead, they welcomed the Attack to Budweiser Gardens for the first post-season game of the year in London down 2-0.

They needed a win. And they didn't get it. Despite being outshot 42-26, the Knights managed to get this one to overtime.

But Lyszczarczyk was the hero again, scoring just 33 seconds into the extra frame to give Owen Sound a 4-3 win.

Bouchard tied it up 3-3 on a power play late in the third, but it wasn't enough.

“We're playing well,” Bouchard said after the game. “We just have to start capitalizing on our chances and we'll be fine.”

Bouchard added that the home crowd will be a huge boost on March 29, as the Knights hope to stave off elimination.

“I think we deserve better,” Tyler Rollo, who assisted on Bouchard's game tying goal, said. “You have to keep fighting, you can't look at it like you're down 3-0, you have to look at it like it's a brand new start.”

With no more room for error in the first round, it'll take four straight wins for London to knock off their Western rivals.

“It's going to be a tough battle, but I think we can do it,” Rollo said. Crazier things have happened.

Motoring: The differences between hybrid, plug-in hybrid and electric

Motoring: The differences between hybrid, plug-in hybrid and electric