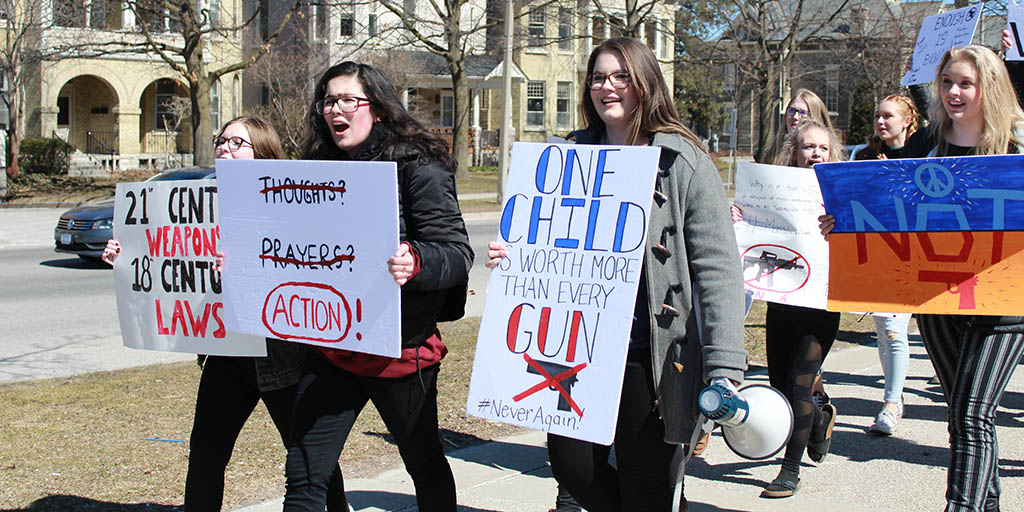 CREDIT: AMY SCOTT
Londoners took part in one of many March for Our Lives protests held worldwide on March 24, 2018.

On Feb. 14, 2018, 17 students of Marjory Stoneman Douglas High School in Parkland, Fla,. were brutality murdered after an expelled student entered the school with an AR- 15 assault rifle and started firing.

Since then, the survivors of the Parkland shooting have been challenging the U.S. government on gun control laws within the country.

As part of this movement, the surviving students organized a protest in Washington D.C., called “March for Our Lives” which took place on March 24, 2018. Key students involved included Emma Gonzalez, David Hogg, Delaney Tarr, Cameron Kasky and Sarah Chadwick among others. Gonzalez gained notoriety after giving a powerful 11 minute speech at a rally just days after the shooting.

In an interview on The Ellen De- Generes Show on Feb. 23, 2018, which discussed the upcoming March, Kasky said the following about this event.

After the initial announcement of the March for Our Lives protest in Washington, cities all over the world held their own Marches to protest gun laws in the United States, including our very own London, Ont.

“As soon as I knew there wasn’t (a March) in London yet, I said to Teigan, we have to do this,” Seaton explained to Interrobang.

The students started the protest by hosting a rally at the northwest corner of Victoria Park. In front of an audience of over 100 people of all ages, the students made speeches and read poetry which honoured the victims of the Parkland shooting. The audience cheered in agreement after each speech and poem was read.

Following the speeches and poems, a group of Londoners performed “For What It’s Worth” by Buffalo Springfield. This song is viewed as one of the most wellknown protests songs of all time.

The March then commenced and protestors proceeded to walk the parameter of Victoria Park three times carrying a variety of different signs, displaying phrases such as “Silence Equals Violence” and “#NeverAgain”, a hashtag which has defined this movement.

One protester was sixth grader, Yuki MacDougall. Holding a sign that stated “Today: Sixth Grade. Tomorrow: The Future”, MacDougall was passionate about the issue at hand.

“This is important because we want to be able to grow up, we want to do things. We don’t want to be afraid,” MacDougall said. She then added that this wasn’t a widely discussed topic at school. “Most of my friends didn’t know about this, which was a bit upsetting. That is part of the reason I am here today.”

While walking the parameter of Victoria Park, Seaton and Elliott lead chants such as “Hey hey, ho ho, the NRA has got to go” and “Never Again”. The protesters received support from passing cars honking and nearby pedestrians applauding them. Some drivers even stopped on a green light to allow protestors to cross first.

“It’s really cool that in the London community we can all come together and speak up for ourselves too,” Western University student Chantal Hermetz, said. “We are saying that it’s not going to happen here, we can’t let it happen here or anywhere else ever again.”

Seaton and Elliott were incredibly happy with the turnout of the event.

“I am so grateful and appreciative to everyone that came out today. We had a really great turnout, more than I could have ever imagined in my wildest dreams,” Seaton said. “I think that goes for all over the world as well. We are one of 828 marches worldwide. We are making our opinions known; things are going to change.”