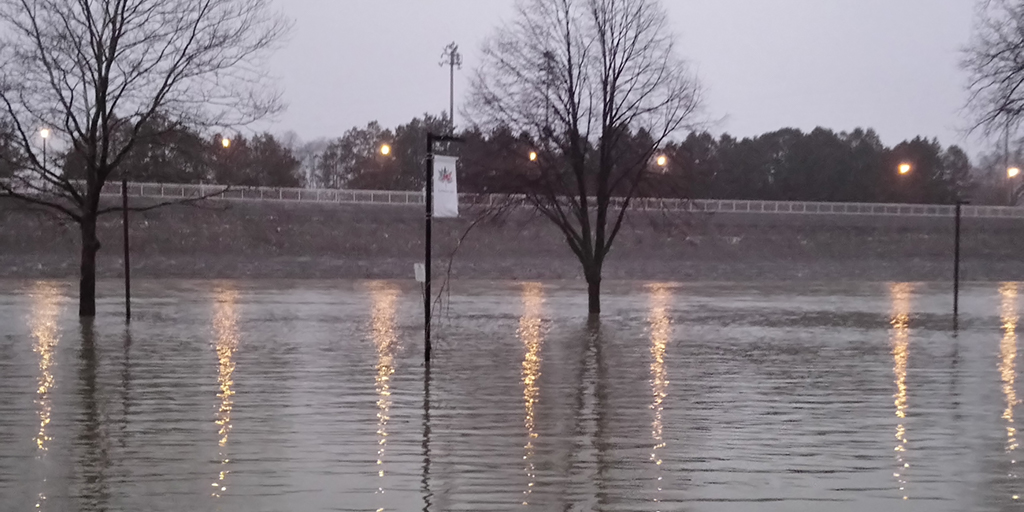 CREDIT: GEORGE MARAGOS
London, Ont., along with other nearby towns and cities had a mix of heavy rain and warm temperatures that caused flooding in certain areas, such as London's Harris Park and Springbank Park.

Torrential downpours, compounded by warm weather which melted ice and snow created quite the soggy situation for many Londoners at the end of February.

The Upper Thames Conservation Authority (UTRCA) reported the rising river was due to rain and melting snow. Theweathernetwork. com indicated precipitation Feb. 19 to 20, was 35.9 millimetres and that the temperature had increased from -1.7 to 15 degrees Celsius. Historically the average rainfall for February has been about 30 millimetres; London got a month's worth of wet in a matter of days.

Water not absorbed into the frozen ground spilled into the Thames River causing it to swell and spill out. Preventative measures were put in place to minimize the effects of the flood utilizing reservoirs and dams. Residents were cautioned to keep children and pets away from waterways.

About 40 unlucky Western University students whose cars were left at residence buildings on Richmond Street were flooded up to the windows; fortunately no one was reported to be inside any vehicles.

Rick Pedlow, Division Manager of Sewer Operations with the City if London, explained that Dingman Road would be closed until further notice; work must be done on both sides of the road as well as on a potential cave-in, and that this work cannot begin until the water recedes.

To make matters worse, Harris Park was completely flooded and people cleared out sandbags from stores to prepare, as some had water pouring in through their basement windows.

The City of London offers homeowners, whose property qualifies subsidies to help water proof their homes through the Basement Flooding Grant Program. Eligible homeowners can apply to have weeping tiles removed, have a pump installed, and back water valves installed. To find out more info about this program or report flooding visit london.ca/residents/Sewers-Flooding/Basement-Flooding-Prevention/Pages/Sump-Pump-Grant-Program.aspx.

Hufflepuff is the greatest house at Hogwarts

Hufflepuff is the greatest house at Hogwarts