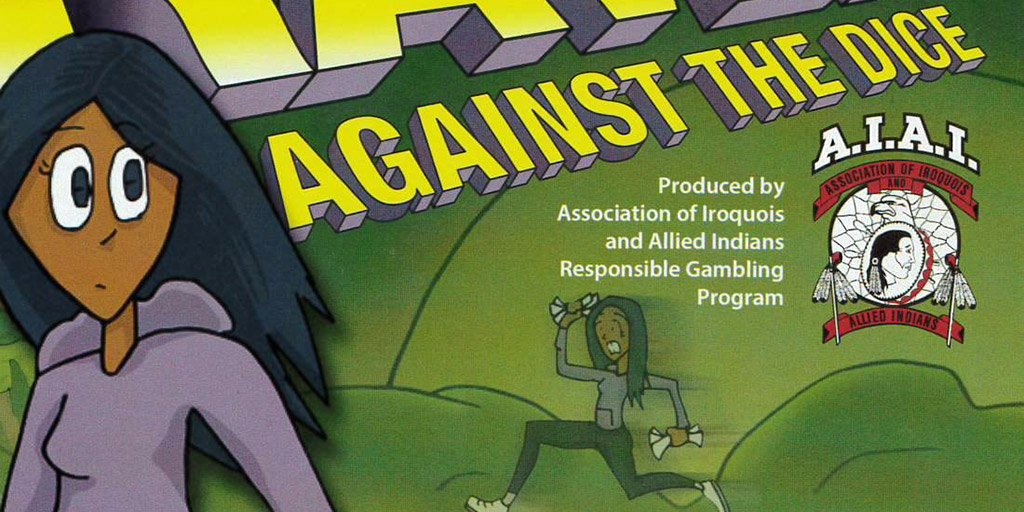 Credit: SAMANTHA KACZALA AND AIAI
Raven Against the Dice and Nurse Hope to the Rescue tell the tale of the troubles of drugs and gambling that plague the youth of the Indigenous community.

On Sept. 23, the Association of Iroquois and Allied Indians (AIAI) debuted the group’s educational indigenous comic book outside indigenous communities and organizations for the first time at London’s Forest City Comicon.

AIAI is a provincial organization which represents its member Nations in the government to protect the values, traditions, laws and lands of indigenous people. The association works politically in areas such as health, education, treaty rights and social development in the indigenous community.

According to Lisa Jackson, Responsible Gambling Educator for the Responsible Gaming Program of AIAI, her and her co-worker, Elly Antone, wanted a way to reach out to indigenous youth about making healthy choices and how they can go about making these choices.

The comic, which Jackson said has been in the works since 2014, published late 2016 and was only available among First Nation communities and other native organizations until Forest City Comicon. With connections to the convention, the organization found it was a perfect opportunity to get their comic, but more importantly, their message out to the public.

Drawn by Sonawahes Antone, the comic features two back-toback stories focusing on problems frequent in the indigenous communities, gambling addiction and undisposed needles used for drugs. Each tale gives a plethora of advice and facts on where to go for help for addiction and what to do when finding a used needle. The underlining theme in each story, Jackson said, is “to reach out and ask for help” when you need to.

Antone explained that the stories may be simple and have mundane solutions, but that the comic will be interesting to read because of its simplicity.

“With those kinds of solutions in this story, you think they might sound like mundane solutions or endings to a story, but I don’t think that’s true. I think it’s possible to build a very interesting story simplest of solutions because sometimes the most complex problems do have the simplest solutions. It’s still possible to tell an interesting story if that’s what you want to do or this is the kind of thing you want to say.” Antone said.

According to Ira Timothy, communications co-ordinator for AIAI, the comic works greatly in bringing to light prevalent issues plaguing a lot of First Nation communities.

“For HIV-AIDS, the scary part is there are some needles that are found around the communities. And it’s not just because of drugs or diabetes, but it also leads to the bigger problem [that] we don’t have any facilities to help properly dispose of needles. We don’t have anyone that has the knowledge or expertise to be able to organize and or take in something like that. And when it comes to gambling, that’s another terrible issue that goes on in the reserves. It stems from other drug abuse. It stems from boredom and from depression, and they need something to do. Unfortunately, gambling is one of the vices they go to. We’re hoping that with this kind of awareness we can bring forward to them that there are different programs for help that they can get.” The message has already hit home for some, as Jackson explained about one parent who has told her about their son’s caution to touching unknown objects on the playground without first consulting them since reading the comic. Max Devries, graphic designer for the comic and professor at Fanshawe College, explained that the medium may be a big factor in successfully getting the comic’s message across.

“Being that it is a comic book that we all kind of grew up with that use that kind of medium, I think the kids and teenagers are a little more intrigued about looking at it and actually reading it, instead of listening to a speech or do something they don’t have the patience for. This type of medium certainly attracts kids and actually maybe they will understand better given the type of media.”

The comic is indeed interesting and a relatable way for AIAI to show that they will have open arms for “others to come and ask questions” about the problems a person may face in their community.
First Nations Forest City Comicon