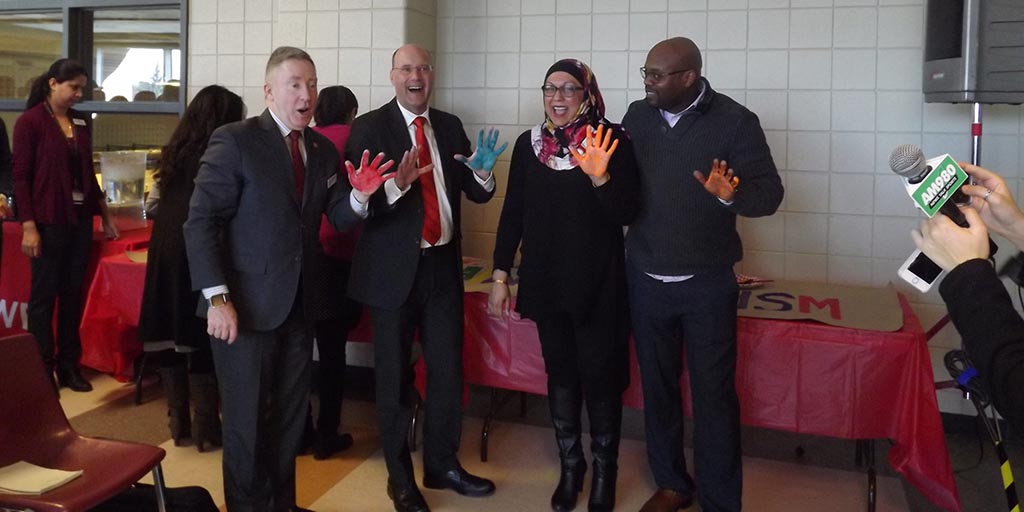 CREDIT: FACUNDO RODRIGUEZ
London community leaders dipped their hands in paint in support of the Hands up Against Racism campaign.

Tuesday, March 21 marked the International Day for the Elimi­nation of Racial Discrimination, which it aims to support actions in the lives of everyday people to stand up, encourage and defend the rights of others.

Dozens of Fanshawe students and London leaders gathered at Fanshawe to raise and dip their hands against racism.

Participants in the demonstra­tion dipped their hands into co­loured paints and helped to deco­rate a banner in a physical support of the intolerance of racism.

London’s Diversity, Inclu­sion and Anti-Oppression Ad­visory Committee launched the demonstration in honour of the International Day for the Elimi­nation of Racial Discrimination. Among the students were many London community leaders includ­ing Mayor Matt Brown, first-gen­eration Lebanese Londoner Waje­ha Chams, chair of the Advisory Committee Rifat Hussain and Fan­shawe president Peter Devlin, who all spoke openly regarding London’s participation in ending racism.

Brown said recognition is the first step to admitting there’s a rac­ism problem in London.

“I challenge you to take a stand and put your hands up against rac­ism, whenever and wherever you see it,” Brown said.

The initiative known as the #HandsAgainstRacism encourag­es people to post photos of them­selves to social media with the hashtag in honour of the day.

Hussain also suggested the campaign of “Make it Awkward”, which originated in Calgary.

“Whenever you hear something completely inappropriate you make it awkward, you make it un­comfortable for the person that’s actually saying [racist] things. That way you become an ally to those that are indirectly victimized. You can voice your concerns, you can address the concerns but don’t re­main silent on the concerns,” Hus­sain said in an article by Blackburn News.

First-generation Lebanese Lon­doner Chams stated that a shifting North American political climate is to blame for rising racial issues across the city.

“It’s always important to rec­ognize and see how the colours of culture can really bring together a sense of hope in the city and a live­ly atmosphere,” Chams said in an article by Global News.

Brown stated that proposals from community members on an anti-racism strategy for London would be going to council in the coming weeks.

“It’s everyday racism that has me most concerned, systemic rac­ism. Each of us as a community member has a responsibility that if we see racism occurring on any given day, that we need to stand up, address it head on and say ‘that is not okay’,” Brown said in an ar­ticle by Blackburn News.

The International Day for the Elimination of Racial Discrim­ination aims to encourage and support actions in our daily lives to defend the rights of others. The encouragement to start mak­ing a difference has began, but as a city, London still has many mile­stones ahead to make the big dif­ference for all of its citizens.
Diversity Racism

1
A note from the Fanshawe College Director of Equity, Diversity and Inclusion
2
Breaking racial barriers in sports
3
Considering racism in London by a Pakistani Muslim
4
Why we need more diversity for women in politics
5
The loss of language and culture in Indigenous communities