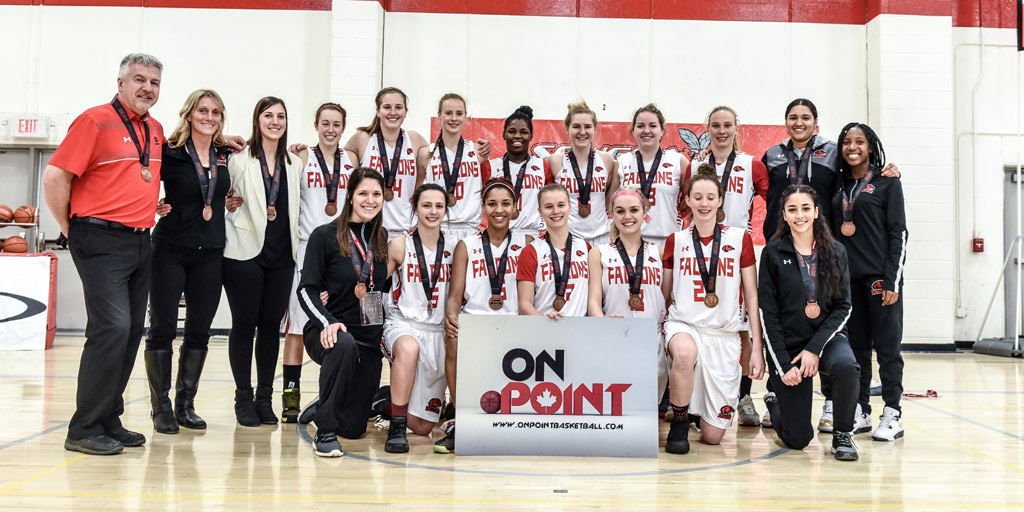 After three difficult games, the team took home a bronze medal in a 72-56 win against the Seneca Sting.

“Unfortunately, we didn’t get [the gold], but I am extremely proud of my team for handling adversity the way we did that weekend and all in all we are happy we got to head home with an OCAA bronze medal, said Mikhaila Wright, a second year player.

The provincials had the Falcons start out strong in a game against the Algonquin Thunder. Pulling ahead early in he first quarter, the Falcons managed to keep their lead taking the game 74-66.

On March 3, the Falcons took on the Humber Hawks, ranked first in the Canadian Collegiate Athletic Association (CCAA), in the semi-finals. The Falcons managed to keep the score close, but the Hawks, who jumped ahead in the first quarter, kept their lead throughout the game and beat the Falcons 70-51.

Vlasman was once again named Player of the Game.

“It was unfortunate,” Carriere said. “They played better than we did, they’re more experience in games in that situation, they were national champions last year so they had a lot of difficult games and had a lot of girls back from last year, I would chalk it up to experience.”

The Falcons managed to wipe the previous night’s loss off their shoulders and come out strong against the Sting in the bronze medal final.

They dominated the game, despite the Sting’s aggressive play, and took home a win and a medal.

“I think our team knew that we were the better team, and had they not overcome the defeat from the day before, it would have been even tougher had they not come out playing so well and working so hard,” Carriere said. “We out played them and we out worked them.”

According to Carriere, he has nothing but positive things to say about his team this season.

“[I’m] very proud of our squad, we accomplished a lot this year despite losing our point guard Laura Vere in the last month of the season and her not being 100 per cent at the provincial championships, we overcame a lot and had a very successful year,” Carriere said. “I’m very proud of them.”
Athletics Basketball Fanshawe Falcons OCAA

Morganna Sampson crushes the competition and becomes the next FSU president

Logan is a bold, mature and heartfelt take on a superhero film