Fear For Thought: The Love Witch casts a spell of dark feminism 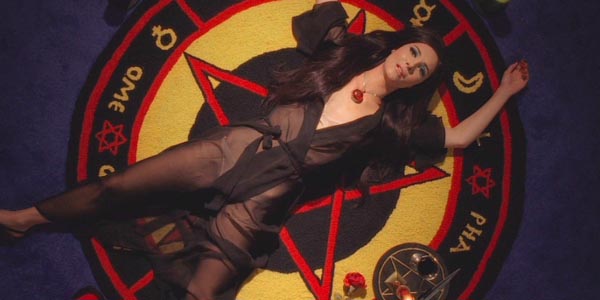 
She may not ride on a broomstick, but Elaine, the eponymous main character of director Anna Biller’s The Love Witch, epitomizes everything it means to be a witch. She is entirely self-serving, independent and most dangerously of all, shamelessly dripping with sexual liberty.

At two solid hours, The Love Witch’s plot tends to run a bit thin. However, the crux of the story remains clear as Elaine flaunts her firm body while casting out love spells like parade confetti to droves of flustered men: in the battle of the sexes, who holds the winning hand?

Gloriously filmed with a now rare 35-millimetre camera, every cinematographic detail of The Love Witch has been painstakingly designed by Biller to emulate visual cues such as trance-like editing and eye-popping technicolours from the sexploitation genre of yore. Spanning from the ‘60s to late ‘80s, these B-class movies depended on promises of deviant sexuality to get audiences’ attention. The degree to which they delivered varies, but The Love Witch pays homage to those few films, which actually managed to sneak in a frank examination of cultural attitudes towards gender and sexuality.

Played by Samantha Robinson in her debut performance, Elaine is determined to start a new Californian life after the abrupt death of her husband. Her modus operandi: to find “true love”.

According to her coven, the key to a man’s heart is through hot, steamy sex. Elaine, wanting the instant gratification of a man’s emotional devotion instead, takes to speeding up the process by casting love spells, but then finds that her own brand of magic is fatally potent.

Elaine’s turmoil stems from her inability to accept that a man would ever see the person she is beyond her Elvira-style wig and makeup, and suddenly after an hour of meandering, The Love Witch demands that we mull over why so many women are taught to use their sexuality as a means to gain power. Moreover, from where does this lesson originate? Even the clueless Elaine unconsciously rolls her eyes when the male leader of her coven preaches it.

Driven to near madness by her inane fantasies of a prince on a white horse, Elaine’s viewpoint directly subverts the male gaze historically embodied by sexploitation titles. As a female looking out into the patriarchy, she faintly senses she deserves better than objectification, but is unequipped to articulate her suspicion. She continues on, confined to parameters that inform her she has a choice between being a witch and being nothing at all, leaving us to hold our heads in our hands and wonder if there is any truth at all to the rumours we hear today of sexual female empowerment. The Love Witch is a visual pleasure to watch, but it is certainly one of bleakest, most innovative horror movies to come out in quite some time.