Trudeau still has work ahead of him 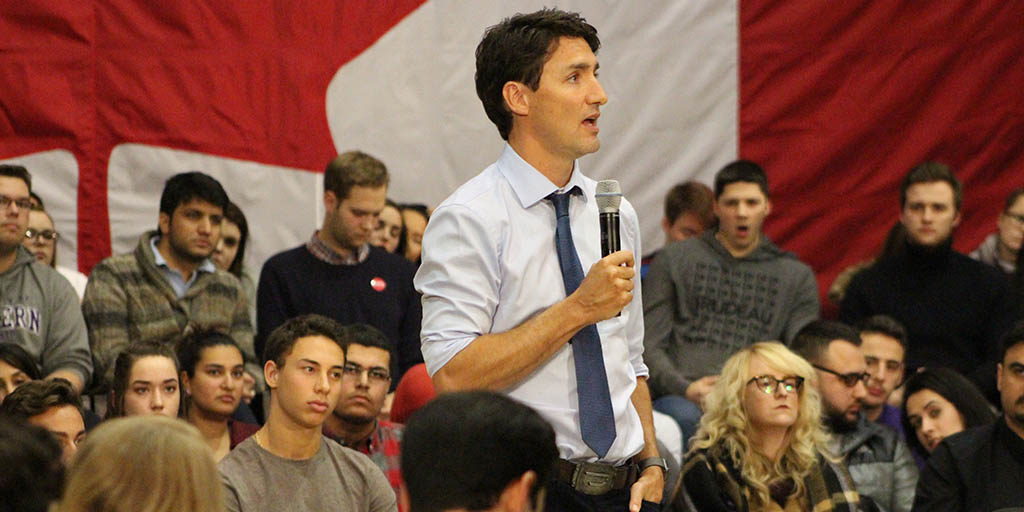 Credit: MELISSA NOVACASKA
Prime Minister Justin Trudeau has been in power for well over a year, so it makes sense why some Canadians could be questioning his work so far.

As Prime Minister Justin Trudeau continues his town hall talks, his liberal cabinet retreat in tow and with a new American president now in the office, Canadians are continuing to see how Trudeau is able to handle everything that’s been coming his way.

With the recent cabinet shuffle and the scrutiny of his stay at the home of Aga Khan, a billionaire Ismaili Muslim, while on vacation, it’s time to take a look at what Trudeau has been promising and actually doing in his time as Prime Minister, which started almost a year and a half ago.

“Trudeau made a lot of campaign promises, but he hasn’t fulfilled a lot of them so far,” said Paul Hallihan, professor from Fanshawe’s School of Language and Liberal Studies and a swing voter.

In Hallihan’s opinion, Trudeau’s recent town hall meetings appears to be a public relations way of showing Canadians he’s still busy, but there are still many promises he hasn’t quite gotten to yet, including legalizing marijuana, backing away from electoral reform and though he has approved some pipeline issues like the Trans Mountain pipeline, and the Northern Gateway pipeline, he still hasn’t dealt with all pipeline issues.

In terms of a budget, Hallihan said the liberals have come up with one and are spending money on infrastructure, which is a positive.

“But I think it’s partially a public relations exercise, and all politicians do this,” Hallihan said.

Hallihan also pointed out that although this is not a big deal, there has been a sense of “chattering classes” in Ottawa of the opposition parties and some journalists over Trudeau’s “secret vacation” and staying at the home of Aga Khan.

“That was a blunder in my opinion by the prime minister’s office,” Hallihan said. “They should have just come out and said this is where he’s going, but they tried to hide it [instead], and they got caught.”

Hallihan thinks most Canadians didn’t care too much on this topic, but it became more of an issue than it needed to be.

Hallihan also stated that though promises such as marijuana legalization are on Trudeau’s unfulfilled list, there are still other issues, such as economic issues that are higher up on the agenda.

“I suspect more people, including students [are asking] ‘Can I get a job? How much is school going to cost me? Can I get better loans?’ I think [the] bread and butter issues are much more important in this climate,” Hallihan said.

However, Hallihan isn’t too sure what Trudeau and his government are doing in terms of policies, if any, to help more students out with education, loans and possibly interest rates.

Hallihan said the relation with indigenous people is a big issue, that’s an ongoing one with previous governments, as well as Trudeau’s, stating that there are many systemic issues like the environment and poverty that still needs to be done.

“It’s kind of a two way street, in the sense that there are federal government things that need to be done, but at the local band area too, amongst the various tribes of the first nation’s people, there’s internal politics there as well, which is separate from Ottawa. It’s a very complicated process and it’s not going to be solved any time soon,” Hallihan said.

In terms of the cabinet shuffle, Hallihan is not surprised by it, and thinks the main thing that shifted the cabinet has to do with issues happening south of the border, including newly elected President Trump.

Hallihan said the shift that made the most sense to him was that of Stéphane Dion for Chrystia Freeland.

“She is a tough negotiator, she’s been the lead negotiator for the trade deal Canada did with the European Union last year,” Hallihan said. “They need a top trade negotiator, which is why I think they shuffled her into that portfolio. They need a hard bargainer, and that’s why that happened.”

Hallihan thinks this particular shuffle was a good move, but that the federal government appears worried on the front which they should be, since they have no idea what Trump will do now that he is in power.

Hallihan believes Trudeau’s recent cabinet meeting in Calgary is a way for the government to strategize what to do next with whatever Trump does.

Overall, Hallihan said that the honeymoon phase with Trudeau is over and now Canadians might be asking what Trudeau has done thus far.

Aside from the cash for access and “secret vacation” scrutiny, Hallihan said Trudeau’s public relations has been fairly good, but he thinks it’s starting to slip a bit.

Any government is stuck in the middle of dealing with environmental and climate change concerns as well as pipeline, which he says the Liberals are trying to “tight walk” through, which will play itself out in time.

“I think voters are now waiting to see if there’s more stuff they can get passed in parliament, to have an effect, particularly economic issues,” Hallihan said.

With the majority of seats in parliament, Hallihan said all anyone can do now is wait and see the what the Liberals do next.
Federal politics Justin Trudeau

1
Canada vs. Brazil: How they choose their representatives
2
Should voting be mandatory?
3
Justin Trudeau calls snap election: What to know
4
Mary Simon: Canada’s first Indigenous Governor General
5
How each major party would stack up as a sexual partner