The truth about suncreen: Is it worth the risk? 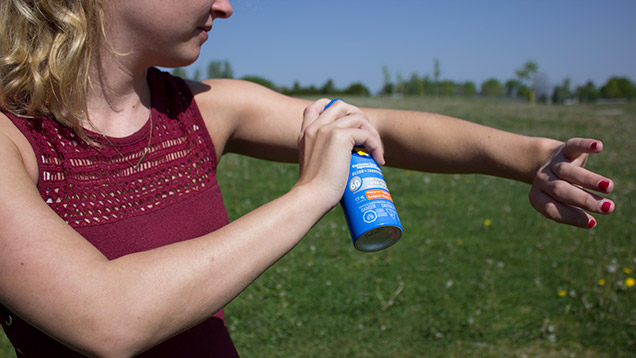 Is putting sunscreen on truly a protective measure against skin cancer?


One in four Canadians will die of cancer and two in five Canadians will develop cancer in their lifetime, according to the 2014 Canadian Cancer Statistics published by the Government of Canada. This is staggering, but true.

Cancer is the deadliest disease in Canada with about a 30 per cent mortality rate. The Canadian Cancer Society estimated around 275,200 new cases of cancer were reported and around 78,000 people died from cancer in 2015.

Skin cancer alone accounts for about one third of all new cancer cases in Canada making it the most common cancer type in Canada, with the rate rising significantly. Nonetheless, skin cancer is one of the most preventable types of cancer.

Kevin Jordan, a medical physicist at the London Health Sciences Centre, said that lack of melanin, suppressed immunity during organ transplant and prolonged exposure to sunlight are major predisposing factors to skin cancer. This makes absolutely all fair-skinned (Caucasians) and red-skinned (Mongoloid) populations more susceptible to cancer than the black-skinned (Negroid) people.

“Fair-skinned people are highly more sensitive to sunlight than dark-skinned individuals. It is therefore important that they wear protective clothing and cover their heads when out in the sun,” Jordan said.

Jordan also stated that the exposed parts of the body can be protected using sunscreen, while laying emphasis on the top of the head, the forehead, the nose, ears and the back of the neck as the most vulnerable parts. According to Jordan, this is why skin cancer rates are prevalent among farmers in Canada due to over-exposure of these body parts to the sun.

“Wear a hat with brims rather than a baseball cap when out or working in the sun. Farmers have this knowledge and wore big hats to protect themselves on the farm.”

Jordan expressed concern that skin cancer is much more of a problem to students than older persons. He therefore called for caution in lifestyle choices and advised that tanning booths be avoided completely.

“It takes about 20 years for sunburns to be converted to any form of skin cancer. It is therefore important for students to protect their skin now to prevent the consequences of living or battling with skin damage for the rest of their lives. It is even more important for children to be protected.”

Jordan explained that sunscreen ointments are not completely protective. Apart from their inability to completely block ultraviolet rays from the sun, the skin can also absorb these substances with the effect of causing other damages to the body.

“The controversy surrounding Sunscreen Protecting Factors (SPF) is a marketing scam. SPF has now been banned in Australia, which is the worst for skin cancer incidence due to its sunny weather and high tourist activity,” Jordan said.

Jordan explained further that skin cancer is caused by ultraviolet radiation (UV) in sunlight and that the ozone layer greatly reduces the concentration of these cosmic rays except for UVA, which has a longer wavelength. So, any sunscreen can block UVB, UVC and infrared rays, but not UVA, which can only be blocked by white opaque substances.

Jordan described UVA as the chief cause of melanoma, which is more dangerous than the other skin cancer types: squamous and basal cell carcinoma. He stated further that having melanin is not enough to prevent UVA radiation, hence, the need to protect the skin adequately.

“Merely blocking sunlight is not enough to protect the skin from radiation and inflammation. White (opaque) sunscreens are the best blockers because they do not absorb white light or radiation and block UVA completely.

“Few people however use the white ointment because of its low cosmetic value. In the same vein, wearing white clothes during summer produces the same protective effect against UVA, which is significant enough. “

Sunlight is ironically beneficial for synthesizing vitamin D in the body. Jordan however stressed that, whether we are getting vitamin D from the summer sunshine or supplements in winter, adopting a moderate lifestyle is equally as important as extensive research, early diagnosis and treatment.

“Education is always the best measure for ensuring that the best decisions are made concerning personal health,” Jordan said. “Healthcare providers should therefore endeavour to teach their patients to protect themselves and their families.”