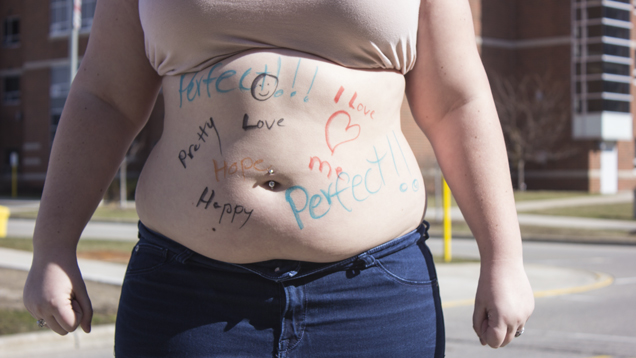 CREDIT: KERRA SEAY
Fanshawe student Shelby McCartney Rundle can now write words of love on her body, but that wasn't always the case.

With yet another trending topic promoting an unhealthy obsession with being skinny, the issues surrounding eating disorders and the fixation with being thin at any cost becomes apparent.

Known as the A4 Skinny Waist Challenge or the #A4waist challenge, this fad encourages people to post pictures of themselves on social media holding a standard A4 piece of paper in front of their waist.

The point of the challenge is to prove that your waist is smaller than the width of the paper, which is only 21 centimeters wide.

According to a 2011 report from the Public Health Agency of Canada, eating disorders such as anorexia and bulimia are characterized by “an obsessive preoccupation with food and weight resulting in a serious disturbance in eating behaviour”.

According to StatsCan, the causes of developing an eating disorder are unknown, though society’s obsession with being thin paired with media reinforcing this idea are considered to be partially responsible.

Shelby McCartney Rundle, a Fanshawe student in the Personal Support Worker program, was 17 when she first began struggling with an eating disorder.

She said her behaviour began when she left a mental hospital to treat her mental illnesses. She would starve herself during the day at school and then come home and eat as much as she could, then purge it all.

McCartney Rundle said she was bulimic for about 18 months before she snapped out of it.

“I was so skinny you could put your hands around my waist and they would almost touch. I had doctors telling me I was going to kill myself,” she said. “People would say, ‘Oh my god you’re so skinny,’ and I would think, you don’t know what I’m doing.”

StatsCan reports that self-directedness, or having a clear sense of one’s self and goals, is associated with better outcomes in overcoming this mental illness. McCartney Rundle said it was her little brother who inspired her to get healthy because she didn’t want him to have to go to her funeral.

“One day something clicked and I was like, you know what? I’m done. I wanted to be healthy again, I wanted to do all the stuff I used to do,” McCartney Rundle said.

She said she did it by herself, and though she explicitly said she does not recommend others do this without guidance, she said she stopped taking her medication and stopped seeing her doctor. Instead she began eating healthy and worked out with her parents.

“I was just trying to do stuff that made me happy again, I wanted to be myself again.”

The A4 challenge is just another fad in the line of trends known as Thinspiration, or thinspo. Thinspo is a popular tag on social media sites like Tumblr and Instagram that showcase skinny models accompanied with messages like, “Nothing tastes as good as skinny feels”, “Waking up thinner is worth going to bed hungry”, and “Nobody wants a fatty”.

Tumblr, a blogging website owned by Yahoo, banned the use of #thinspo and made links to mental health services available to those suspected of needing help. Yahoo stated that thinspo blogs promoted self-harm, which violates its terms of service agreement.

Pro-ana and pro-mia are other terms used in the thinspiration community; ana is short for anorexia and mia is short for bulimia. Young women on social media sites use the names Ana or Mia as codes to other users to let them know they are thinspo supporters.

McCartney Rundle said blogs and photos like these are triggering for someone who has dealt with an eating disorder, but all she can do is scroll past them with the hopes that they learn the same lessons she learned.

“I need to be healthy for my family, my relationship, my career and my future. It’s a lot of hard work but you just push through it,” she said.

Anyone dealing with an eating disorder or another mental illness should contact Counselling and Accessibility Services in F2010 or contact the National Eating Disorder Information Centre toll free at 1-866-633-4220.

Interrobang Walks off the Earth to see Marianas Trench

Fanshawe Fashion Design graduates take over the runway on April 9