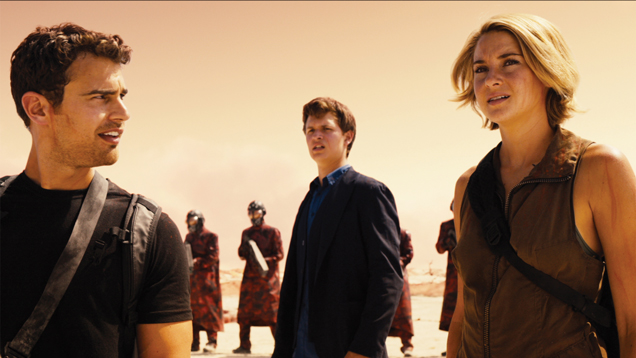 Credit: LIONSGATE (2016)
If you like little action, clichéd writing and racist undertones, this is the movie for you.

Everything has changed. The wall is open for the first time in 200 years, the Factions have been destroyed, Jeanine and the Erudite are no longer in power and a new council have taken over. Tris Prior, still recovering from her brother’s betrayal, takes a back seat, finally resting after her long struggle.

Except not really. From the first moment of Allegiant, where the walls close on the hopeful citizens, we see that nothing has changed. An old dictator has simply been replaced with a new one, who is just as ruthless but much less intelligent. The Factions are far from gone, as some still cling to the old system and old lines of hate remain. Any character growth from the last film is undone, with everyone going back to square one.

This is a film full of terrible writing and plot holes. From magically having enough equipment to get an extra, unexpected person over the wall to yet another big secret reveal about Tris’ mom, Natalie, little in the movie makes any type of sense. The mom reveal is especially annoying as it seems like every movie they have to show something new about the woman, even if it contradicts the last big reveal and completely destroys the idea behind the big experiment.

Which brings up yet another problem Allegiant has, an inescapable thread of anti-intellectualism. Of course the Institute is evil because every corporation or scientific venture is. It invades privacy, practices eugenics (a practice that is linked to the forced-sterilization of minorities particularly favoured by the Nazis and bigots everywhere), kidnaps children for literally no reason and is overtly racist.

This isn’t the first film in the series to play to the “smart people are inherently compassionless robots” cliché, but it certainly takes the idea a few steps further. Meanwhile, Tris gets the pleasure of finger waving and telling people off for not learning from their mistakes while seeming to almost go out of her way to not learn from her mistakes.

Some of the terrible writing might be forgivable if the film was at least shot well, but it doesn’t even have that going for it. From awkward close-ups to painfully obvious green screens, it seems as though Allegiant lost its budget halfway through production and decided to hire some random dude off the street for all its editing and filming needs.

It would be a stretch to attach anything positive to the movie at all. For the most part, it feels as though they simply took the terrible ending of Insurgent, completely ignored the rest of the series and added in some poorly handled race issues for good measure. Every character, no matter how smart they’re supposed to be, repeatedly makes stupid decisions that serve no purpose other than to drive the terrible plot.

Overall, Allegiant is the worst movie (so far) in a series that has been getting worse with each installment. At this rate, the next film will have all the quality and logic of Troll 2.

LARP: Pick up your sword and hit the ground swingin'

The vital question on where to live