What the frack does that mean?: Terms you need to know for roleplaying games 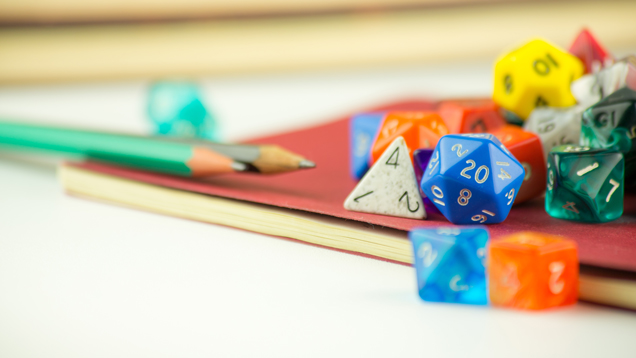 Credit: LANTERNWORKS / THINKSTOCK
Before rolling the dice to play Dungeons & Dragons, try learning some of the terms first.

Playing a pen-and-paper tabletop roleplaying game (RPG) can bring worlds and characters alive while also giving you a reason to drink and be silly with friends. Whether wandering dark and twisting alleys or fighting a dragon to save a village, there are some basic terms everyone needs to know.

More often referred to simply as D&D, this is actually a collection of multiple similar games with variations of rules, races and classes. D&D 3.5 is the most commonly played edition, although there are two newer editions, both of which were made simpler in different ways. The easiest to access is fifth edition, which has free base classes and races up to level 20 available online.

This both refers to a die with 20 sides and a system that bases success or failure of actions on this type of die. Usually rolling a one is considered an automatic fail or botch, occasionally with hilarious consequences. Rolling a 20 is an automatic success, with some great additional benefits like extra damage, depending on the game you’re playing. There are numerous systems with many of different types of dice used, but D20s are the most common.

The Dungeon Master or Game Master (GM) are in charge of the story, creates the enemies and holds your life in their hands. While most GMs try not to kill the players, a guiding rule is to never antagonize the GM, unless you’re fine with the possibility of a meteor crushing your carefully built character.

This is basically your job in the group. You could be a fighter, hacking and slashing your way through hordes of goblins, or a wizard, flinging fireballs from a distance, or a cleric, healing and protecting your friends while keeping an eye out for evil. With tons of available classes, you can choose pretty much anything you want to be, and most games have expansions to give you even more options.

This doesn’t refer to ethnicity or skin colour, but species. Often included are elves, dwarves, humans, halflings and gnomes. Each game will have slightly different description, with specific benefits and disadvantages for each race. Certain games, like Shadowrun, which is set in a dark future full of evil corporations, limit your race options and include racism as a game mechanic to make the world feel more depressingly realistic. Other games let you choose from pretty much anything you can imagine, on this world or any other. Rifts, which lets you explore every world from the old west to a post-apocalyptic cyber future, is a great example of this.

Don’t do this. Metagaming is when a player uses knowledge that their character has no way of realistically knowing in the game. This can ruin the experience for everyone, exacerbating the GM and other players. After all, the chances of the dumb barbarian dwarf knowing how to solve a complex riddle are pretty slim.

Total party kill. The dragon has eaten you all.

Gamer: The toxicity of fanboyism

Jump into the weird, weird world of Anime