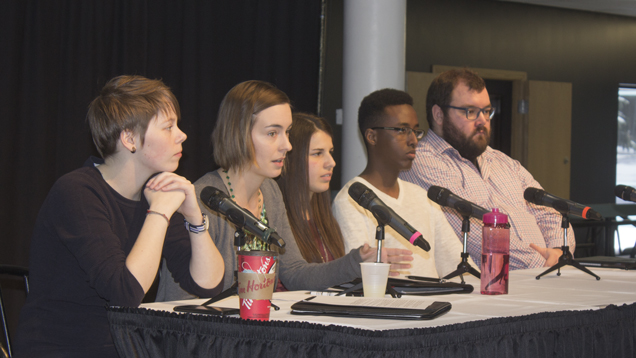 In an unprecedented turn of events there are five candidates running for Fanshawe Student Union president. The five spoke at a Q&A on March 2 to discuss student issues.


With five students running for the position of Fanshawe Student Union (FSU) president, it looks like it’s going to be an interesting election.

In a typical year, the FSU expects a small number of potential candidates, with usually only two candidates running for the top spot. The fact that there are so many this year was a shock to most.

The two students running for VP entertainment are Cameron Pocock and Morganna Sampson.

Four current FSU electives are running for a different position this year.

Speeches from all candidates and a presidential Q&A forum were held on March 2 to give students an opportunity to hear from the candidates, to ask the presidential candidates questions about their platforms and what they plan to do should they be elected president.

Unfortunately, even the allure of free pizza was not enough to bring out a large crowd to the event, but the good news is that the entire forum was live streamed through Periscope and the entire event will be available online on the FSU Facebook page so students who missed the event can make their own impressions of the candidates.

The Q&A featured all five presidential candidates. It began with opening speeches from each one followed by questions supplied by host Jason Kerr as well as one from an audience member.

The questions featured important topics such as the Ontario budget changes around free tuition, parking services, how to increase attendance and safety at events and how to improve satellite campuses, food services and residence experiences.

A common theme amongst all candidates was to communicate in a better manner with the student population.

Bailey did not have a traditional journey to Fanshawe and credits the fact that she has not been involved with clubs on campus as one of the things that will make her a good FSU president, while using knowledge and empowerment as the foundation for her campaign.

“I’m not running for FSU president because I think it’s easy. In fact, rarely do I get nervous and I am shaking right now. But that’s because I care and I really, really think this is important,” Bailey said.

Yousuf said that his experiences as someone who comes from a large family as well as the fact that he attends a satellite campus gives him a good perspective about student issues. He said his program teaches troubleshooting and problem solving, two things that he would bring to his presidency.

“In my program we look at the problem, look at the functions and where the problem arises, then we assess the proper steps to fix or resolve this problem. These problem solving skills that I have learned have been applied to my position on the Student Administrative Council (SAC) for the School of Transportation Technology and Aviation Technology,” Yousuf said.

The following three candidates are all current FSU executives and all cited their previous experiences working in the FSU as why they would make a great president.

Forsythe said she has attended Fanshawe for many years and has three different diplomas under her belt already, and that she has organized successful events for the FSU including the launch of Enriched Academy with former Dragon Bruce Croxon from Dragons’ Den. She added that her platform is based on four pillars: advocacy, culture and diversity, transparency and communication.

“I feel that I’ve been able to make a significant contribution to student life,” she said. “I believe in accountability as an organization and will continue to push for sustainable initiatives and financial accountability of all FSU operations.”

Nikides said she’s been known as “the girl with the smile who goes the extra mile” and even wrote an acrostic poem-style campaign motto to accompany it. “S” for smart, “M” for management, “I” for inspires, “L” for leading, “E” for edge and “S” for services.

“Smart management inspires leading edge services,” she said. “As your president I will make your voice heard, providing the services you didn’t even know you had. The services are valuable but only if you know you have them.”

Borneman said he’s the best candidate for the position because he has a lot of experience in such positions and said that he will be the leader that the FSU needs to get through the next year, something that he was vague about.

“The FSU is in the midst of a huge change and they really need a strong leader to bring us through that,” Borneman said. “I’m committed to spending my time here at Fanshawe, spending my time with all of you students and spending my time in the hallways learning from each and every one of you.”

Jason Kerr, chief returning officer at Fanshawe and host of the speeches and Q&A panel, is a former FSU president from 1999-2000 and said student apathy is a problem, but hopes the high number of presidential candidates means more students will get involved, adding that five contenders is unprecedented.

“I don’t think people realize how involved in the college that the student union is… or how much they represent student interests,” Kerr said.

Current FSU president Alan Bushell had some advice for all candidates running in this election. “Go all in. They need to be fully dedicated to running for this position, especially with a five person race,” Bushell said. “Whoever works the hardest, whoever shows the most passion and whoever has the best platform is going to be the victor.”

Campaigning will run from March 2 to 10, with voting taking place from March 7 until March 10 at 2 p.m.