Rumours of Grace: How Charles Darwin and the Big Bang prove that God exists 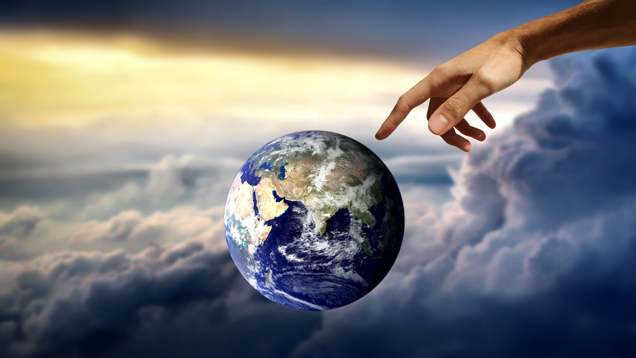 CREDIT: MICHELE PIACQUADIO / HEMERA / THINKSTOCK
Taking all theories and hypotheses into mind it becomes clear that the existence of God is just as viable as the Big Bang theory.

If there is no God, would there be anything? Many physicists, biologists, philosophers and theologians are saying probably not.

One of the people who is saying this is Antony Flew. Dr. Flew has taught at Oxford University and has been a professor of philosophy at the University of Keele for 20 years.

Several years ago, he wrote a book called There Is a God (2007). He is one of many people writing in favour of God these days. But what makes Flew’s book interesting is that he spent most of his career as a philosopher dismissing belief in God.

People like myself, who as students went to divinity schools or seminaries, institutions where people prepare to become priests, pastors or ministers, studied the thought of Antony Flew. He was one of the most famous atheists on the planet. His hugely famous essay, “Theology and Falsification”, claimed that statements about God were not provable; they were not open to being proved either true or false and therefore were not worth our attention.

Some of the other evidence is philosophical. One bit of it surfaces in Flew’s analysis of the discussion of the origins of the universe. By the universe Flew means the whole shooting match: the expanding universe of 100 billion, 200 billion or even 500 billion galaxies, depending on which source you are using.

Flew also means all of life including all those reproducing creatures. Plus he means the ability of human beings to experience pleasure and pain, beauty and degradation, truth and falsehood, wonder and cynicism.

Billions of people around the planet believe that a creator, powerful and possessing a mind, created the universe. We naturally, innocently and quite justifiably feel that the patterns we see in the biological world, in physics, in music and in the mathematics that help us understand just about everything, are evidence that the universe is not a random item, but that it is designed and created by a god.

He is more than a mind. His mindedness might not even be his most prominent quality. But he is at least a being with a mind.

Flew shows how the greats in physics and other disciplines saw in their fields of study the mind of God. These scientists include Albert Einstein, Max Planck, Werner Heisenberg, Charles Darwin and many others.

Still, atheism appeals to some of us. That means that we put on the table explanations for the existence of the universe that do not include a god.

Atheist theories about the cause and source of everything are it turns out, few in number. There are really just three. The first recognizes that the chances of a universe arising that could generate the exquisite patterns that we see and that could give birth to life are staggeringly tiny. The way around this difficulty is to theorize that our universe is one of millions, ours being one of those that by chance is highly patterned and that generates living organisms.

Such theorizing however, is purely a work of the imagination. By definition we could never discover another universe because there the laws of physics would be different from ours making it impossible to have any contact.

Flew considers the notion of multiple universes “a truly desperate alternative” to avoid the idea of God. He compares it to a schoolboy whose teacher does not believe a dog ate his homework. So the schoolboy changes the story to include a pack of dogs, too many to count, one of which snacked on his homework.

The second alternative is to theorize that the universe has always existed on the basis of its own laws. And that’s it. We can’t explain it. We just accept it. However, this is an incredibly unsatisfying view. That is because everything we see in the universe is caused by something else. It is not possible to conceive of one thing that does not have multiple causes. It is even more difficult to conceive an entire universe that is completely obedient to the laws of causality but remains itself, somehow, as a whole, uncaused.

It says in the video series, Cosmos: A Spacetime Odyssey, that our universe started as a big bang from something like one atom. That must have been one butt-kicking impressive atom. For it contained the genetic material for the patterned web of galaxies we see and all the wonders therein.

And what caused it to exist? No matter how far you push backwards into the history of the universe that question remains. As well, the question of apparent design never fades.

Flew writes, “The ‘nothing’ is in certain instances a chaotic space-time foam with fantastically high energy density. The nothing they speculate about always has some energy, some entity. So, this is a theory that isn’t what it appears to be.” Nothing can come from nothing. Unbelievable as that may sound to some, it is apparently true.

The universe doesn’t prove that God exists. In the end, the claim we can make is little more modest. But it’s still a pretty good claim. We can claim that the best explanation – not the only but the best explanation – for why our universe exists is God. If that is true, we are possibly in the middle of a ride that is more amazing than we usually think.
Editorial opinions or comments expressed in this online edition of Interrobang newspaper reflect the views of the writer and are not those of the Interrobang or the Fanshawe Student Union. The Interrobang is published weekly by the Fanshawe Student Union at 1001 Fanshawe College Blvd., P.O. Box 7005, London, Ontario, N5Y 5R6 and distributed through the Fanshawe College community. Letters to the editor are welcome. All letters are subject to editing and should be emailed. All letters must be accompanied by contact information. Letters can also be submitted online by clicking here.

Reyno Ramblings: Everything wrong with The Cat in The Hat