Calls for investigations into funding for Fanshawe's new facility 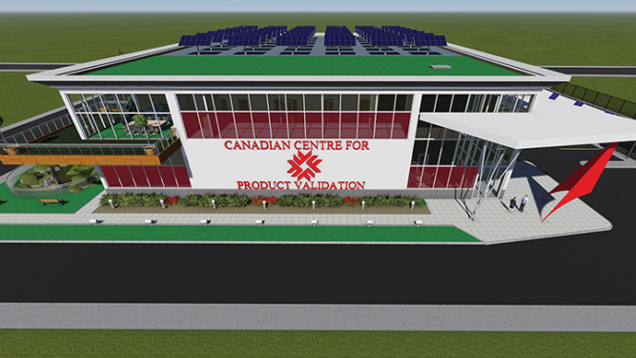 CREDIT: FANSHAWE COLLEGE
An illustration of the new building that is set to open this spring.0

The Canadian Council of Independent Laboratories is calling for an investigation into the federal funding of Fanshawe College’s new national product testing facility.

The federal government has funded $8.1 million of the $16.2-million needed for the Canadian Centre for Product Validation testing facility that’s set to open this spring on land donated by London.

Ben Cecil, associate vice-president, academic excellence and innovation at Fanshawe College, said CCPV will provide multi-modal testing, which he describes as “the ability to test across a number of separate platforms whether its mechanical, electrical, environmental, chemical and so on.”

According to Cecil, there are no comprehensive multi-modal and developmental labs in Southern Ontario.

He believes that rather than providing direct competition to the private labs, their work should complement the private sector labs.

However, owners of private labs believe this facility to be detrimental to their business.

Tony Araujo, vice-president testing at Paragon Systems at Concord Ont. and a member of the CCIL, said that Fanshawe College and FedDev consider his lab to be a direct competitor.

Derwyn Reuber, executive director of CCIL, said the private sector is concerned about the financial arrangements the federal government has made for CCPV, putting the facility in a position to compete unfairly with the private sector to the point where the labs could be forced out of business.

“This can only be described as an attack on the private sector and a misuse of taxpayers’ money,” Reuber said in a press release.

As of now, CCIL has not received a formal response from Navdeep Singh Bains, Minister of Innovation, Science and Economic Development to investigate.

CCIL has also written to the Ontario Ministry of Training, Colleges and Universities, believing Fanshawe College violates the directive that states, “in engaging in commercial activities, colleges must not, either by virtue of their access to public funds or by virtue of their not-for-profit status, compete unfairly with the private sector,” as stated in the binding policy directive.

“A compromise would be that we have some sort of non-compete agreement with Fanshawe that would someway protect the private sector from the testing that Fanshawe will be doing,” said Reuber.

In a letter sent to Local 110, which represents Fanshawe College faculty, Jeff Low, executive director of human resources at Fanshawe said they have made initial projections of around seven employees and “no academic staff will be employed at CCPV and no teaching is scheduled to take place at this facility.”

Darryl Bedford, president of OPSEU Local 110 said because OPSEU cares greatly about the creation of jobs for their members, they were disappointed with this claim.

Cecil said although no academic staff will be employed at the CCPV, there is a possibility them to work on projects at the facility.

Fanshawe College will profit from the operating revenues, part of which will go to support students, bursaries and future operations to sustain the local economy.

Cecil believes Fanshawe’s $8.1 million investment into the CCPV to be worthwhile as it will support future opportunities for graduates.