Today's roller derby isn't all about fishnets and booty shorts 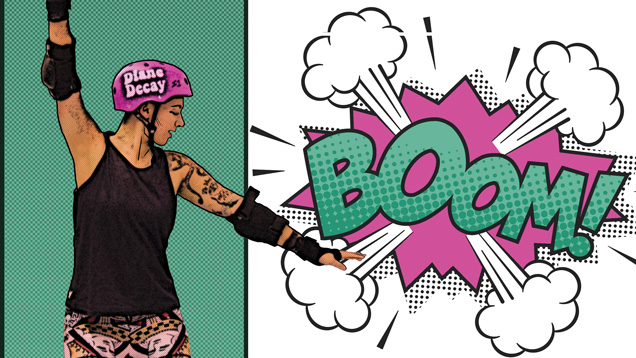 Short skirts. Broken noses. Black eyes. Wild, wanton women on skates. Ask any unschooled passerby to describe roller derby and you’ll most likely hear variations of these words. Thanks to the scripted theatrics of shows like 1989’s RollerGames or the 2009 film Whip It, roller derby is all too often preceded by a reputation of chaos and disorder, usually leading potential players and spectators to dismiss it as a tawdry exhibition of over-the-top violence and skimpy outfits.

According to Thames Fatales president Stephanie Pedro, also known by her roller derby moniker Vote for Pedro, this couldn’t be further from the truth.

“It’s now more of a competitive sport,” she said. “There are rules, regulations [and] guidelines that you have to follow. The fishnets and derby names are a part of it, but it’s changing to be more professional, more competitive. It’s not just about hitting, there is skill to it.”

In London, the Thames Fatales are only a portion of what has become a burgeoning roller derby culture. Created in 2006, the Forest City Derby Girls league has heralded a roller skate revolution with three separate teams: The Timber Rollers serving as the travel team, the Fatales for home games and the Thicket for the new, so-called “fresh meat” recruits.

Since its humble beginnings as a long-distance skating spectacle in the ’20s, the American sport of roller derby has undergone a number of reinventions before becoming the underground pastime it is today.

While the activity first started off as a way to boost physical endurance and raise money from audiences, it quickly evolved into a contact sport by the ’40s, with two five-person teams attempting to overthrow each other on a single track. Played by both men and women, national interest in the sport rose and fell from the ’50s until the early ’90s, when not even a televised format like that of the WWE could hold the public’s attention.

It wasn’t until the early ’00s that roller derby saw an unprecedented revival as the sport suddenly gained rapid popularity amongst amateur women’s groups. Integrating the older aspects of early ’90s staginess with newer attitudes about third-wave feminism and “Do It Yourself” sentiments, the toughened, self-respecting icon of the female roller derby player spread like wildfire over social media avenues. It established itself as an internationally recognized symbol of rebellion and feminine solidarity.

While many female athletes have defied past conventions by participating in sports that have formerly been created and dominated by male players, contemporary roller derby stands out as the first sport in which the revised, highly detailed rules and regulations have been determined solely by women, intended primarily for female play - ers to abide by. With the mission of giving experienced, inexperienced and otherwise overlooked female athletes a chance to be part of a team, today’s roller derby can be thought of as a high-speed political statement on wheels.

For Fatales captain Cate Curtis, Chelsea Swagger, the fiercely inclusive aspect of the game has afforded her some unique opportunities for personal growth.

Despite having never played any previous sports, Curtis said she nevertheless managed to discover a new side of herself.

Just four practices in, newcomer Nicole Munro is already taking in similar benefits of being on an all-girls’ team.

“All of us girls are here for similar reasons: we want to do it for ourselves, we want to do it to make ourselves better and do things that nobody thinks we can do. I’m getting to be good friends with the girls because I can relate to them. We’re all here to be stronger.”

From offering a fun chance to get physically fit to providing a safe space for venting out everyday frustrations, today’s roller derby is ultimately designed to serve its participants with a sense of community that they may not find anywhere else.

By learning to rely on one another, the women become close in a way that both challenges and empowers them.

According to fellow captain Lindsay Flemming, Lin-Sanity, “There’s always going to be drama when you have a big group of people, but the girls have your back. You’re part of something. You’re part of a team.”

It’s clear that the sport of roller derby has seen dramatic growth in the past decade, yet outside attitudes have some catching up to do. Being taken seriously as an all-women’s competitive sport is hard, and getting sponsorship is even harder.

“There’s not a lot of awareness about roller derby. People don’t understand the sport now compared to what it used to be. I think people have this misconception that it’s a highly sexual sport,” said Jessica Brandon, Nasty Nags.

For her, confronting stereotypes can be difficult, but she won’t let it stop her from doing what she loves.

“Back in the day, players dressed fairly provocatively. I don’t want to be perceived that way. I want to be seen as an athletic woman who’s confident and strong.”

For the roller derby movement, the greatest deterrent against ignorance is spreading awareness and becoming involved. The Forest City Derby Girls will accept any woman over 18-years-old into their Fresh Meat program, no experience necessary.

The captains are devoted to their new recruits every step of the way, first teaching them how to skate and then how to kick butt on the track. They’ll even supply loaner gear.

For spectators, home games take place seasonally, with the next event at the Western Fair Canada Building on Dec. 12. To see what else you’re missing out on, visit forestcityderbygirls.ca. The Forest City Derby Girls are calling, louder and clearer than ever before.