Freeheld: Celebrating the freedom to falter at storytelling 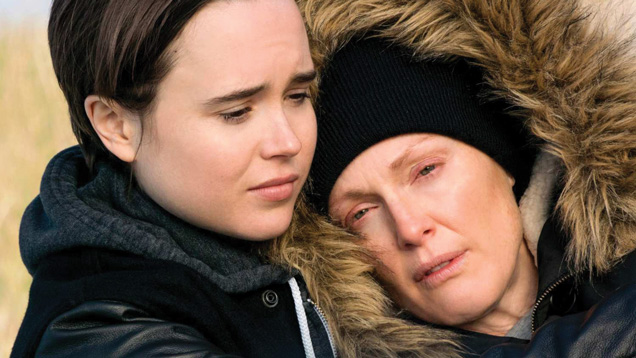 Freeheld stars Julianne Moore and Ellen Page in the true story of a same-sex couple fighting for equality.


It has been a mere five months since same-sex marriage was legalized in the US, and our mainstream cultural mindset has been making the transition from resistance to acceptance quite smoothly, at least according to Hollywood.

Homosexual characters and relationships are at last being given more complex and humanizing depictions in scripts, as has been exemplified in shows such as Orange is the New Black and movies like The Imitation Game.

The critical success and popularity of such projects has opened the doors for formerly closeted actors to emerge and show their support of gay rights.

Amid such performers is 28-year-old Canadian Ellen Page, who announced her orientation, not without a genuine quiver of nervousness in her voice, during a Human Rights Campaign conference in 2014.

Now, after her declaration, she stars alongside Julianne Moore, Steve Carrell and Michael Shannon in director Peter Sollett's Freeheld.

Based on a true story, Freeheld has Moore and Page portray lesbian couple and domestic partners Laurel Hester and Stacie Andree in 2005.

After being diagnosed with terminal lung cancer, New Jersey detective Hester makes the tragic request to her county legislature to allot her pension benefits to Andree.

On the grounds that the union does not warrant the same merits as a heterosexual partnership and would otherwise be a waste of taxpayer's money within their Republican- based community of Ocean County, Hester's appeal is unceremoniously denied.

The film goes on to show how, with the help of Hester's professional partner Dane Wells (Shannon) and flamboyant lawyer Steven Goldstein (Carrell), Hester and Andree successfully persuade the conservative freeholders to allot them their basic human rights. This ultimately paves the way to further ground breaking motions in the American political landscape.

Freeheld glosses over what is meant to be a meaningful, uplifting story of love triumphing over adversity, and at certain junctures, it succeeds.

It makes a valiant effort to zone in on each character, nefarious and otherwise, and provide insight behind their motivations, personal and political, for either supporting equality or denying it. Nevertheless, the outcome of the story feels more loosely woven than tightly knit.

Considering that this is a film which supposedly aims to challenge traditional beliefs, the performances themselves are direly clichéd and one-dimensional.

Shannon, playing his usual typecast self, is deliberately juxtaposed as the straight, willing-to-change, white man beside Carrell's uninspired version of what he seems to think is the all-liberal Jewish, wrist-flinging homosexual.

In what is clearly a move of pandering for audiences who are not overly familiar with queer theory and culture, the film relies too uncomfortably on generating obvious binaries for novices to easily identify. It's difficult not to cringe when Carrell screams “Oh honey” at Shannon and, as if in a Saturday morning cartoon, Shannon deadpans with a monotone “Don't call me honey”.

Thankfully, Freeheld is what's sure to be only the first in a long line of films surrounding the history of gay rights in the United States.

In the long run, it gets its point across: certain groups have had to struggle for privileges that others have been handed at birth. This is always a worthwhile reminder, no matter how sloppily put-together the message feels.

The execution of Freeheld could have been better, yes, but there is still a certain victory in the fact that it had a chance to execute it in the first place.