Unconscious communication: They Live, and the dark side of social media 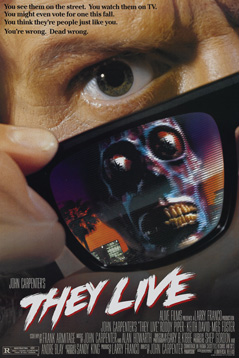 John Carpenter's They Live is a study of how easily media can be used to manipulate the world by a race of ugly, capitalizing aliens.


November has brought some interesting stories to our newsfeeds, highlighting the negative impact of social media mania.

With half a million followers on Instagram and over a hundred thousand YouTube viewers, style icon Essena O’Neil unexpectedly appeared, makeup-free, in what would apparently be her last YouTube video as part of “a statement that real life isn’t through screens”.

Similarly, at a recent talk at the Yale Center for Emotional Intelligence, Lady Gaga broke the standard celebrity mould to declare that through information technology, “We are not actually communicating with each other. We are unconsciously communicating lies.”

While social media has enriched our lives in many ways, O’Neil and Gaga’s allusions to its darker side have nevertheless struck a chord with internet users, thus calling into question just how influential advertising in social media has become.

Horror director John Carpenter found himself wondering the same thing about the media of his day. This resulted in his 1988 cult science fiction, horror movie, They Live.

Starring the late professional wrestler Roddy Piper, They Live is a dystopian vision of a world marred by sheer economic disparity. Our main character, George Nada, is just one of thousands reduced to squalor and nomadism in his search for a stable job.

During his stay in an LA shanty town, he stumbles upon a pair of sunglasses that, once worn, reveal secret messages dictated by an oppressive alien race, embedded into the media to sedate mankind into a state of servitude.

To make matters worse, the aliens who look as though their heads “fell in a cheese dip back in 1957” are disguised as the upper class, offering their human captives the opportunity to join their ranks at the cost that they hand over whatever remains of their free will and independent thought.

They Live is a gem of a horror film boasting chilling special effects, a hilarious script and fun action sequences, but its most impressive and enduring quality is its startling portrayal of how the media can be maneuvered by invisible hands.

At one point in the film, Nada listens to a woman on television describe her lust for the fame her alien overlords have granted her, “People watch me. And they love me. And I never, never grow old, and I never die.”

The modus operandi of Carpenter’s alien race is comparable to that of the most insidious of advertisers, to prey upon humanity’s innermost desires and insecurities, such as the fear of death and need to be loved.

When it comes to illusory marketing, social media platforms are a horn of plenty for predatory advertisers, where their audience’s most personal fears and wants are voluntarily laid bare to be analyzed and tailored to.

As O’Neil and Gaga have testified, it’s all too easy to get swept up in all the hype without even realizing it. Akin to Carpenter’s sparkly-eyed aliens, we need to be aware that advertisers know this, and more often than not will use this against us.

In these troubling times, They Live is the perfect cinematic antidote. The film reframes our landscape by pointing out and vilifying the onslaught of advertisements that surround us.

Best of all, it makes the claim that human beings deserve better. If O’Neil and Gaga have not yet convinced you of this, John Carpenter surely will.