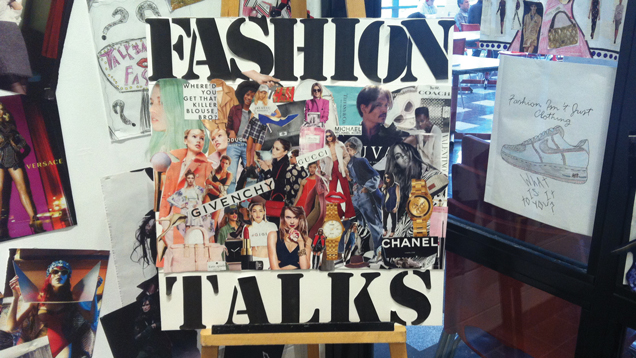 Carey’s Bar and Grill was packed on Friday, Oct. 23 for the Ghouls’ Night Out fashion show put on by second year fashion design students at Fanshawe.

The show was a fundraiser for their third year project, the Unbound fashion show and magazine, which is a spread of the students’ best work that goes into the Canadian fashion magazine Flare. A panel of leaders in the industry including David Dixon and Franco Mirabelli will judge the 2016 Unbound show.

Fanshawe is the only fashion school in Canada to get their own spread in Flare, and according to second year fashion design student Jennea Smith there is prestige that goes along with the spread.

She was also one of the coordinators of the show and got all of the dresses that were featured donated from her co-op placement at Elle Couture. All of the pieces were originally high end evening gowns that the students altered into Halloween costumes and auctioned off.

“We have some Tony Bowls, we have some other designers in there, they’re really high end. These dresses usually retail for about seven hundred to about a thousand dollars.”

She was happy to be able to hold the show despite the Blue Jays’ game also drawing a crowd to the bar.

Jennea’s assistant for the evening was second year student Michael Howard, who also had a piece in the show. He said it was originally a “very hideous” wedding gown that he turned into a costume inspired by Tim Burton’s Corpse Bride. He added that everyone in the program is very passionate.

Second year student Olivia Van Boxtel was at the event to organize the hair and makeup, as well as the models. Leading up to the show she and the other students were extremely busy preparing.

“It’s been very stressful, very overwhelming, especially with all of the assignments that we have on top of it, so it’s been a lot of after class work and weekend work. We had to plan a workshop to come in and have everything organized and ready to go for this fashion show.”

This show, however, is just the first step in preparing for their show in third year.

“This is basically where you start… We don’t actually do the planning of it until first semester of our third year. We’re just trying to get the funds for it to make sure that it’s still a go and that we can get the ball rolling.”

Dressed up as an Egyptian queen in a gown she altered herself, Van Boxtel said she hoped everyone could take their eyes off of the game for a couple of minutes for the show and they did. She also wanted people to know that the fashion design program is not as easy as it looks.

Bring on the moustaches