All drains lead to the ocean 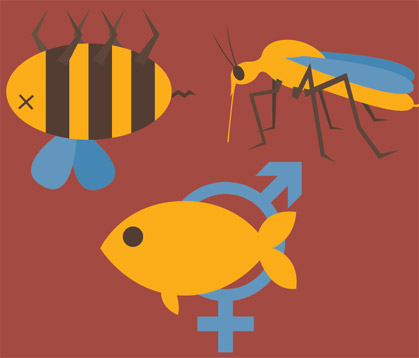 CREDIT: CANDIS BROSS
The chemicals humans manufacture for pharmaceuticals and pesticides all end up in the water supply and can have devastating affects on the ecosystem.

So long and thanks for all the fish.

Our society loves its conveniences. Soaps to make us smell nice, antibiotics to cure our every illness and a tiny pill to prevent one of the more expensive results of sex.

However, our heavy reliance on chemicals is having strange and unintended side effects on our ecosystem.

It’s easy to assume that once you swallow a pill that’s the end of the story, but many pharmaceuticals – especially hormones – don’t break down in our bodies. Instead, they end up in our toilets to be flushed back into the world, entering our rivers and lakes and even being recycled back into our own drinking water.

Luckily for us humans, we’re comparatively large organisms and it would take drinking far more than the recommended eight cups of water for the traces of birth control, antidepressants and other medicines in our water to affect us.

Unfortunately for many species of fish and other aquatic animals, they not only drink but also breathe the pharmacological soup we’re slowly turning our waterways into.

Research done by the International Institute for Sustainable Development over the course of several years found that fish populations can undergo drastic collapse thanks to artificial estrogen, as male fish become feminine and the eggs produced by female fish are altered.

When minnow populations plummet, insect larva goes uneaten, which may help explain the vast swarms of mosquitos attacking innocents. The populations of larger fish, birds and mammals that rely on those minnows for food are also lowered as they lose their favourite prey, which can quickly lead to a full ecosystem collapse.

While we can see the results on small fish populations fairly easily, we still don’t know how other birds and mammals will react as the concentrations of these pharmaceuticals slowly increase over the years. Our brains are highly specialized, but a bear might find that those antidepressants are far from cheering, and antibiotic resistant versions of diseases may develop more quickly far beyond our limited control.

It’s only in the last decade that scientists have been able to study the problem properly at all. Until fairly recently, scientific equipment was nowhere near sensitive enough to detect such small chemicals amid the thousands of microorganisms and natural molecules found in even small water samples. Now that we have the equipment, studies are occurring, but long-term studies take years, meaning that it may be too late before the results are known.

Sadly, humans using chemicals with devastating results isn’t a new story. DDT was in common use in agriculture to control pests for decades before studies revealed its detrimental effects on birds of prey. Populations of bald eagles, brown pelicans and many other species are still recovering over 40 years later, and some species, such as the California condor, are still experiencing severe side effects.

More recently, Ontario has limited the use of neonicotinoid pesticides, common in agricultural use since the 1990’s. These pesticides have caused collapses in honeybee populations worldwide, causing problems for farmers and gardeners everywhere, not to mention shortages in the production of delicious honey. It remains to be seen whether, after 20 years, we’re too late to reverse the trend.

Some scientists argue that human overpopulation is a greater threat to our environment than estrogen, but this may be a short-sighted solution. The pill has now been available for well over 50 years, with usage increasing consistently worldwide. This means that the concentrations of estrogen will continue to increase as well, and appear more and more in ecosystems already sensitive thanks to human activity.

While engineers and scientists search for filtering solutions to use in municipal water treatment plants, there are a few things the average person can do. First, make sure you take any unused drugs back to the pharmacy where they can be disposed of properly. Flushing extra medicine down the toilet may be easier, but it’s worth the effort to know you aren’t harming another creature.

Secondly, if you are taking hormonal birth control, consider asking your doctor for the lowest dose that will work for you. Some pills contain far lower concentrations of artificial estrogen than others while remaining equally effective.

Certain brands, such as Alesse, Yaz and Lessina, have fairly small amounts of the hormone, delivering about 20 micrograms of estrogen per day – a significant drop compared to the 35 to 50 micrograms per day offered by other pills.

The lowest effective dosage is actually found in the NuvaRing – at only 15 micrograms per day – which has the added benefit of being left in place for three weeks at a time. If you’re thinking of getting an IUD, remember that there are non-hormonal versions available, such as a copper IUD.

Finally, while it’s important to take your full course of antibiotics when prescribed, try to resist taking medication for every small cough. As annoying as small illnesses and headaches can be, do your best to try non-pharmacological options first. A lot can be fixed with rest and vitamin C, and preventative measures such as healthy eating and drinking the occasional glass of orange juice work far better than trying to fix a problem later.

We’re starting to see the very real impact our choices are having on the world around us, with many species becoming endangered or extinct as a direct result of human actions. Remember: what goes in must come out. It’s where it goes after we need to be aware of.

It can be easy eating green